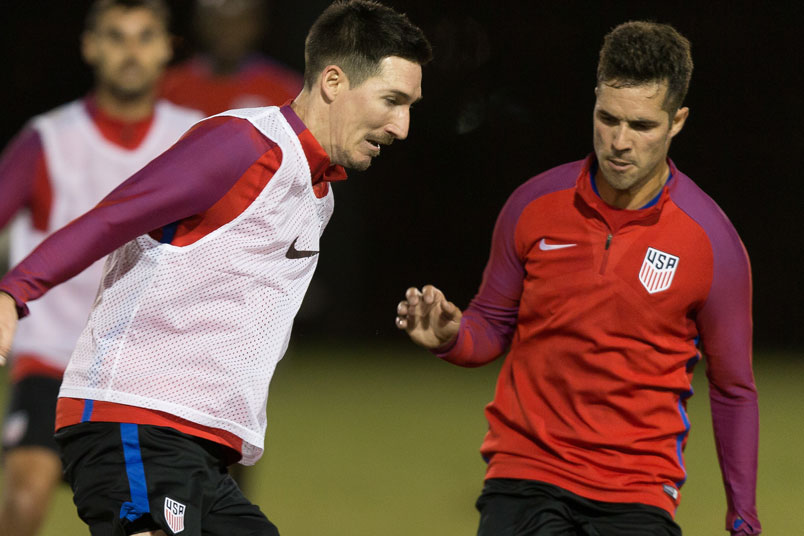 By Jason Davis – WASHINGTON DC (Jan 5, 2018) US Soccer Players – For the second time in two days, one of Major League Soccer’s premier creative players found himself changing teams in an offseason that has not been short on surprise transactions. On Tuesday, the New York Red Bulls shipped Sacha Kljestan to Orlando City in a trade that moved the two-time MLS assist leader and $150,000 of allocation money for a pair of young players. On Wednesday, Sporting Kansas City swapped midfield maestro Benny Feilhaber to expansion side LAFC for a total return of $400,000 in allocation money—$200,000 in GAM and $200,000 in TAM.

Kljestan didn’t land in Florida without warning. Feilhaber, on the other hand, looked settled in Kansas City as part of the core that remained from the 2013 MLS Cup title and a run of five straight playoff appearances.

Even the signing of an attacking midfielder to a Designated Player spot wasn’t an indication that Feilhaber’s time in Kansas City was short. 25-year old Frenchman Yohan Croizet doesn’t come with the kind of resume that would presume him to be a lockdown starter from day one, The thought in Kansas City was that he would split time with Feilhaber.

At the same time, Sporting flipping Feilhaber for allocation money in an era when the system is flush with new cash is not surprising. It does not seem as though Peter Vermes and Sporting were shopping Feilhaber. They simply could not turn down the offer made by LAFC. LAFC was also linked to Kljestan. LAFC’s acquisition of Feilhaber follows Kljestan’s move to Orlando City.

The trade reunites Feilhaber with his former USMNT coach Bob Bradley and gives him an opportunity to play in a side with excellent attacking talent. The midfielder’s skill set should fit in well with a group that boasts the likes of Carlos Vela and Feilhaber’s former Sporting teammate Latif Blessing.

From Sporting’s end, the trade follows very closely in the footsteps of New York’s choice to move Kljestan. Feilhaber will be 33 before the month is out, an age when most players slow down dramatically. Age is especially difficult on midfielders. In the modern game, even the most advanced midfielder is often asked to cover significant ground on both sides of the ball.

Feilhaber’s numbers did drop last season. After recording 13 and 15 assists in 2015 and 2016 respectively, Feilhaber collected just three assists in 2017. Some of that reduction is because of poor finishing by Sporting’s forwards. The club shipped out their top goal-scorer, Dom Dwyer, midway through the season. Some of it was down to Feilhaber himself. From the heights of 2015 and a place among the finalists for the MVP award, 2017 was a disappointing year for both the player and the club.

Sporting’s run of five straight playoff appearances carries with it a sizeable caveat. The last four of those appearances since the 2013 MLS Cup win ended after a single knockout round game. Two US Open Cup titles in that timeframe strengthen the resume, but Vermes is a coach intent on winning championships. As Sporting are unlikely to increase their spending levels to keep up with the likes of Toronto, Atlanta, and LAFC, their best road to continued preeminence is by making smart moves at the right time.

Timing was certainly a factor in the choice to trade Feilhaber. Even beyond the Feilhaber’s age is his contract. 2018 is final year on Feilhaber’s current deal, meaning the club would have likely gotten nothing for him after this season. Comparing Feilhaber’s move to the Kljestan deal is difficult because Orlando City sent players to New York, but $400,000 is a reasonable return even in the current MLS economy.

The departure of Feilhaber likely spells the beginning of the end for Sporting’s group of 30-plus veterans, most of whom played key roles in the rise of the club to one of the League’s best. Matt Besler, Graham Zusi, and Roger Espinoza are all 31 or will be by the start of the season. Together that group accounts for $2.35 million in salary, with Espinoza occupying a Designated Player spot. Sporting faced difficult questions about when, or if, to cut ties with names that are synonymous with the era that turned professional soccer in Kansas City from laughing stock into a success story.

For the time being, those players are still on the roster and will likely play big parts in whatever Sporting does in 2018. Questions about their long-term futures are on the table, but that might be a discussion for next offseason.

What is in front of Vermes and Sporting now is the problem of replacing Feilhaber’s influence in time for the start of the 2018 season. $400,000 is a significant amount of allocation money to spend, but Sporting’s boss doesn’t have a lot of time in which to spend it. The club needs depth. The club needs goals. The club needs younger options with injuries and drops in productivity a threat to its aging core.

Two days, two blockbuster trades for elite creative players in MLS. Thursday came and went without another big trade, but the offseason is far from over. The way things are going, we shouldn’t be surprised when a few more of the league’s stars find themselves on the move.