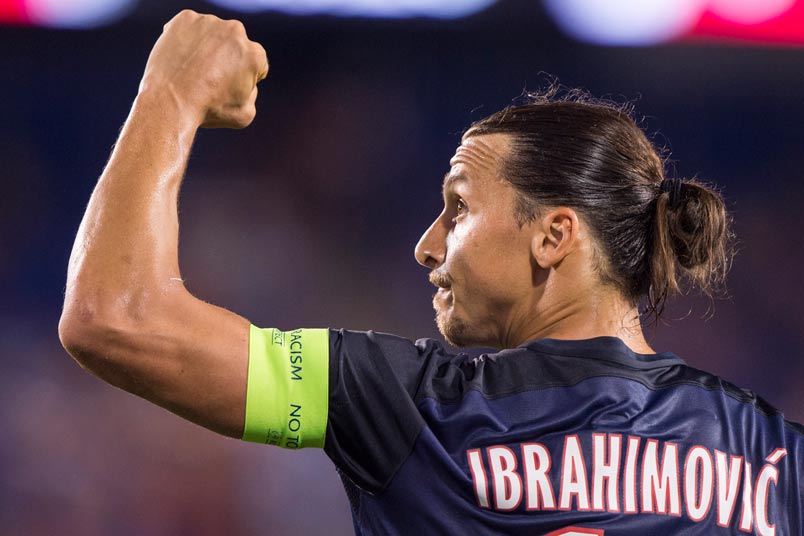 By Luis Bueno – RIVERSIDE, CA (Jan 31, 2018) US Soccer Players – The LA Galaxy has never been shy about moving the needle. From bringing in Mexican players like Luis Hernandez and Carlos Hermosillo in the league’s early days to landing the biggest splash ever in David Beckham a decade-plus ago, the Galaxy has constantly blazed new trails.

It seems like the Galaxy is close to making another attention-grabbing move. Reports from both sides of the Atlantic suggest that Manchester United star Zlatan Ibrahimovic is nearing a move to the Galaxy. Although Ibrahimovic is under contract with the English giants, manager Jose Mourinho told media this week that he would not stand in the player’s way to make a move outside of England. As enticing as this move may appear, there are concerns.

Long the seekers of fortune and collectors of name talent, the Galaxy would be regressing in making this ill-fated move. Ibrahimovic is too old and too much of an injury risk to make any meaningful difference for the Galaxy or any other MLS team for that matter. To land him would smack of early MLS when grabbing name players simply for their names was a reasonable approach.

Perhaps the biggest question about this potential move is how it would work. The Galaxy have three of their three Designated Player slots filled with Romain Alessandrini and brothers Giovani and Jonathan Dos Santos. Reports suggest the Galaxy could use Targeted Allocation Money to fit in Ibrahimovic’s contract, but the maximum salary under such a designation is $1.5 million.

Ibrahimovic reportedly earns some $213,000 per week with Manchester United. He flies by the $1.5 million mark in under two months.

Now, perhaps Ibrahimovic is willing to play for less. Perhaps he may see MLS as his last chance to make an impact in a respectable and growing league. But players have come over here before late in their careers and still commanded a hefty salary. Steven Gerrard pulled down more than $5 million in his one full season with the Galaxy. Didier Drogba earned $2.17 with Montreal in 2016, while Kaka was the league’s highest-paid player at more than $7 million per year during his time in MLS.

Players like Frank Lampard ($6 million) and Andrea Pirlo ($5.9 million) still made an immense amount of money. So did David Villa ($5.6 million) and Bastian Schweinsteiger ($5.4 million).

Big European stars have big egos to accompany their big European talent. To bank on someone the caliber of Ibrahimovic on taking a gigantic pay cut is not realistic.

Would the Galaxy clear space by moving a DP off the roster? The most logical choice would be Alessandrini since the Dos Santos brothers came together and would likely be upset if one moved to a different club. Alessandrini was the Galaxy’s best player a year ago. He lit up the league, scoring 13 goals and adding 11 assists on a rotten Galaxy side.

Alessandrini is certainly one of the bright spots of the club heading into 2018 and to move him would create a hole where there isn’t one. Sure, the Galaxy has a glut in the midfield, but the team would miss Alessandrini’s versatility and fire. With as much of an investment as the Galaxy made on acquiring Giovani Dos Santos and eventually brother Jonathan, a move involving one or both would seem unreasonable.

If somehow the Galaxy finds a way to either get Ibrahimovic to agree to a $1.5 million salary or the club figures out how to pay him more without moving anyone of significance off the roster, the move still would raise questions.

Ibrahimovic hasn’t played since December 26. With the arrival of Alexis Sanchez at Old Trafford, Ibrahimovic’s is a needle-in-the-haystack in Manchester United’s depth chart. This move may have happened last summer, but Ibrahimovic suffered a serious knee injury in the spring of 2017 that is still causing him problems. At 36, Ibrahimovic is not in a place where he can recover quickly.

Now, add in the peculiarities of MLS. European players typically find the amount of travel involved playing in MLS difficult. It’s a lot of air miles in this league. That affects recovery and match fitness.

The Galaxy could use a high-caliber forward, as could any team in MLS. A healthy Ibrahimovic would be an asset. Ibrahimovic would score goals and bring energy to the team during games. Still, to expect him to come stateside and start and play 25-30 games is preposterous. Even Schweinsteiger, who had a similar plight as Ibrahimovic, languishing away at Manchester United, suffered through injuries and struggled with some aspects of the move to MLS and the Chicago Fire. He will not turn 34 until August.

It’s off the field where the deal makes more sense. Ibrahimovic would give the public a tangible piece of evidence is indeed trying to recapture past glory and trying to look good in the process. Ibrahimovic is the kind of name player that transcends MLS and would land the Galaxy more mainstream media coverage. Jersey sales would be grand as well and both the club and the player would make money through that revenue stream.

Still, this isn’t how modern MLS operates. This is a dated solution if the focus is on the name first. It’s easy to see how that turns into disruption and distraction for a Galaxy team looking to push up the Western Conference table.

That’s the Galaxy’s problem right now. We all saw what happened last season. This season, there’s the added difficulty of having a big money expansion team just up the road. How a player like Ibrahimovic might fit into this scenario is certainly a question. From this version of the LA Galaxy, it’s just not a very good one.