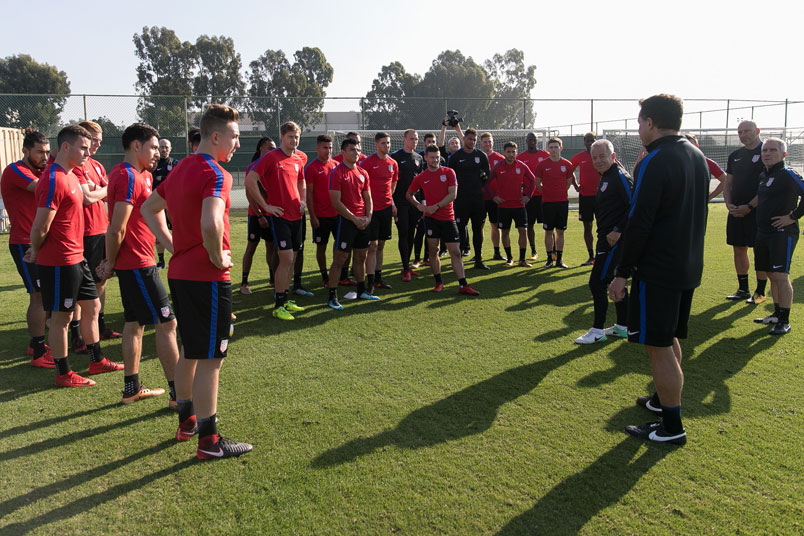 The soccer news starts with the USMNT in camp in Carson. In a mixed zone session distributed to the media, USMNT interim coach Dave Sarachan spoke about the focus for January camp. With a group of 29 players looking for an opportunity in the wake of not qualifying for the 2018 World Cup, the coaching staff called in players who haven’t gotten a lot of look at senior level.

“The past is the past,” Sarachan said of pushing on after not qualifying and the departure of coach Bruce Arena. “Today was day one of a new cycle, a new group of guys. They say you learn from the past, but the focus is the opportunity they’re being given right now. We have a good group, a young group with a lot of energy. So I think they’re not thinking about anything but today’s first session and getting back and having a meal and going again tomorrow and following it through to the 28th.”

Sarachan also addressed his interim status and the uncertainty surrounding the program as we wait for the US Soccer Federation presidential election next month. Sarachan said, “we have a job to do. I’m hired to do this job. We’re all in this together, and with or without a president we’re all still trying to move this group in the right direction. Give them opportunities, play our friendlies, play during the fixture dates, and be ready when the real stuff happens. It’s business as usual, but it’s not usual.”

Also in the soccer news, in one of last offseason’s major moves the New York Red Bulls traded their captain Dax McCarty to the Chicago Fire. That highly questioned decision put McCarty into the Fire’s rebuilding process, one that got them into the playoffs last season. McCarty’s certainly contributed, named to the All-Star team. The club announced on Wednesday that McCarty has agreed to a two-year extension.

“After taking time to reflect on the 2017 season, I’ve come away with a very clear picture of what the future looks like for the Chicago Fire,” McCarty said. “Although the year did not end how any of us would have liked, I believe we’re on course to becoming a perennial contender for trophies like Fire teams of old. Together with the fans, our club can build on the foundation laid last season and now set our sights even higher. I’m excited to be in Chicago long term and am looking forward to getting back on the field soon.”

For the Fire, this gives them carryover in a rebuilding process that stretches back to the beginning of the decade. Since losing the Eastern Conference finals to Real Salt Lake in 2009, Chicago has made the playoffs twice. Both were knockout round exits in 2012 and last season. That lack of success has run in parallel with trying to grow a soccer market in the suburban Chicagoland village of Bridgeport. The Fire’s last trophy came in 2006, their fourth US Open Cup. Their only MLS Cup came in their expansion season in 1998, making the final in 2000 and 2003.

The Fire’s situation isn’t unfamiliar to other clubs playing in their debut season. MLS is a league of now in the expansion era. The latest teams grab the spotlight alongside those clubs willing to spend considerably to compete. Chicago brought in Bastian Schweinsteiger last season, but that move had its critics pointing to an older MLS model. Schweinsteiger’s play silenced much of that, but this was still a team in yet another transition.

With that in mind, McCarty commiting to the Fire’s plan is important. His leadership is part of why he’s been a crucial part of so many MLS teams. New York’s now established trend of trading away their captains says nothing about McCarty. He’s the type of MLS player that knows how to make his teams better.

FourFourTwo has the issues with goal line technology this week in France. The Guardian’s David Goldblatt and Daniel Nolan on Hungary prime minister Viktor Orban’s government spending on soccer.

💬 #Kohfeldt: “@joshsargent will probably train with the first team one or two times next week. It’s been a positive start, but we will give him time to develop.” #werder #svwtsg pic.twitter.com/n7nuwnd22U