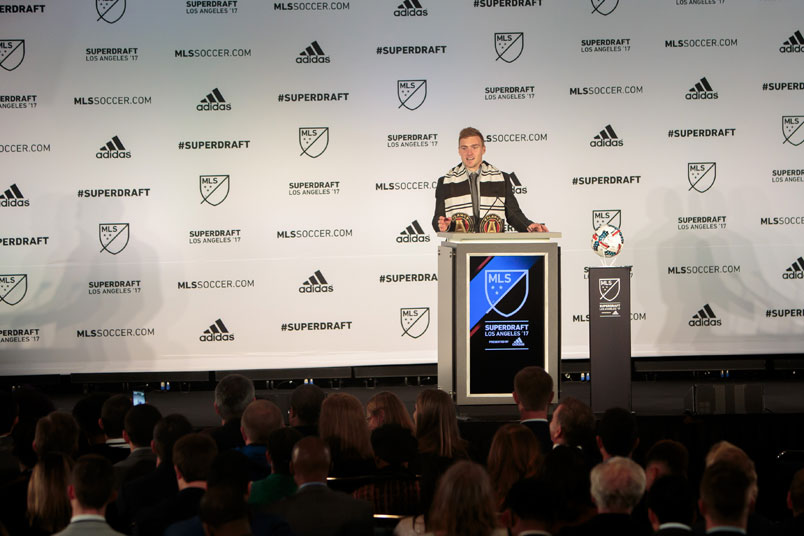 By Jeff Rueter – SAINT PAUL, MN (Jan 18, 2018) US Soccer Players – On Friday, all 23 MLS teams will convene in Philadelphia for the 2018 MLS SuperDraft. This marks the 19th iteration of the MLS SuperDraft, where a record 92 selections will be made. Don’t be fooled by the increasing number of picks. There are still legitimate discussions to be had about the merits of the draft as teams lean more heavily on international talent over young, domestic players. Needless to say, this doesn’t always lead to sound decision-making.

The MLS SuperDraft still matters. It’s still an easy and established way for teams to add to their squads. Sometimes, that requires teams getting out of their way and focusing on the obvious need.

Here’s a look at one area of the pitch each MLS side should be looking to upgrade through the SuperDraft. Keep in mind. Not all needs listed below represent the team’s biggest hole. Instead, these are areas that may lack an apprentice for an experienced veteran, depth for a weak position group, or a starter altogether.

Atlanta United – Best Available
Not much of a hard-hitting prediction to kick this list off. Still, some teams are in the right position to look for pure upside over immediate fit. After a busy offseason highlighted by acquiring Darlington Nagbe and Ezequiel Barco, they’ll be looking to find a hit to follow in the footsteps of last year’s Rookie of the Year, Julian Gressel.

Chicago Fire – Defense
Last offseason, the Fire underwent a massive facelift, with players like Dax McCarty and Bastian Schweinsteiger pushing the team above the red line. While goalkeeper may be their biggest weakness, there’s plenty of room for improvement along the back. 2016 1st-rounder Jonathan Campbell may be part of the equation, but another young face would be a welcome addition.

Colorado Rapids – Attack
We don’t know what formation the Rapids will deploy under new boss Anthony Hudson. However, the side has been starved for goals in recent history, having scored fewer than 40 goals in each of the last three seasons. While Dominique Badji was a pleasant surprise in 2017, designated player Shkelzen Gashi has left something to be desired from the wing. Without a first-round pick (traded to Montreal in 2016 for Eric Miller), Colorado will have to either trade up or hope a talented player falls down the board.

Columbus Crew – Wing
There could be a massive overhaul in Columbus as the team braces for a potential relocation at the end of the 2018 season. Kekuta Manneh has already left for Liga MX, and both Ola Kamara and Justin Meram have had their wishes to leave made public. The Crew have had success in drafting wingers like Meram and Ethan Finlay. They’ll hope to strike gold again this time around.

DC United – Striker
Highlighted by last summer’s acquisition of Paul Arriola, DC has retooled their attack completely. Luci Acosta returns, and the signing of Darren Mattocks gives Ben Olson a sparkplug either off the bench or from the wing. If a player like Jon Bakero or Mason Toye falls to the third pick, expect them to pounce.

FC Dallas – Wide positions
After a historic collapse in 2017 and the departure of Walker Zimmerman, it’s tempting to peg the Toros for defense help. Instead, Dallas should finally begin to fortify a position that’s sorely needed help since Fabian Castillo left in 2016. Alternatively, fullback was an issue in 2017 and could use addressing if the right player is available.

Houston Dynamo – Defense
While DaMarcus Beasley and Philippe Senderos each had fine campaigns in 2017, both are beginning to get long in the tooth. The one-time MLS giant was reinvigorated by Wilmer Cabrera and could use some fortification on the backline.

LAFC – Midfield
The expansion side still doesn’t have a clear first-choice striker. Given their profile, it’s likely that they’ll look outside of MLS for their main man. Instead, the center of the park could use some attention – more likely in the second round than the first. With Benny Feilhaber pulling the strings, some additional defensive savvy in the midfield will go a long way to getting LAFC in the playoffs.

LA Galaxy – Striker
It’s possible that no team missed a single departed player than the Galaxy must’ve yearned for Robbie Keane. While Bradford Jamieson IV is full of potential, a more traditional center forward would ease the pressure off of Giovanni dos Santos’ shoulders.

Minnesota United – Defense
After setting a record for goals conceded in their debut campaign, the Loons have only brought in former Seattle and Atlanta fullback Tyrone Mears. Whether it’s Joao Moutinho or Tomas Hilliard-Arce in round one, or one of their two picks in the second round, expect Minnesota to fortify the backline at some point on Friday.

Montreal Impact – Striker
While Matteo Mancosu filled in admirable for want-away Didier Drogba in 2016, his production took a swan dive last season. Anthony Jackson-Hamel filled in admirably, but with two of the top seven picks, Remi Garde should have plenty of attacking talent available.

New England Revolution – Midfield
There are plenty of holes on the Revs’ roster, but with Lee Nguyen requesting a trade, midfield players will likely take precedence. New England has a good track record of getting the most out of their central midfielders, and a player like Mo Adams could thrive.

NYCFC – Best available
While NYCFC had their defense exposed by Columbus in last year’s conference semifinals, the team is more likely to focus on the best American player available to save their international spots. Every year, a talented domestic player seems to fall through the cracks to help a contender. NYCFC will hope to win that lottery this time around.

New York Red Bulls – Fullback
While Kemar Lawrence may be the best left back in MLS, he’s long been rumored with a departure from the Red Bulls. Jesse Marsch would be wise to find his understudy – or shore up a right back position that could use some attention, as well.

Orlando City – Centerback
While Jonathan Spector and Jose Aja had respectable seasons, the Lions took a hit in giving up top prospect Tommy Redding as part of the Sacha Kljestan trade. Orlando might be lured into a potential early run on attackers to start the draft, but there’s always a chance they could trade back into the first round if the right prospect is available.

Philadelphia Union – Best available
Unlike Atlanta and NYCFC, this projection isn’t due to quality and depth abound. The host city’s side won’t make a selection on Friday, with their first pick sitting at 54th overall as part of the conference call on January 21st.

Portland Timbers – Best available
Like the Union, Portland won’t be called upon until the third round – waiting until the 61st pick for new boss Gio Savarese to make his first SuperDraft selection. Still, the former New York Cosmos coach has a long track record of bringing the most out of young talent, and could elicit some value from his late-round choices.

Real Salt Lake – Goalkeeper
It’s nearly a guarantee that RSL will take a field player with the 10th overall pick if they hold onto it. However, the team has long been overdue to groom a successor to Nick Rimando. While the US international has had possibly the best career of any goalkeeper in MLS, it’s time for Mike Petke to look toward the future. If the top goalkeeper of the 2018 class falls to the second round, RSL could pounce.

San Jose Earthquakes – Defense
The Earthquakes had one of the most porous sides in the league last season, and little has been done to address this thus far. The Quakes are lacking for international spots at the moment, so they’re likely to select the best American player available when their name is called.

Seattle Sounders – Midfield
The two-time Western Conference champs return the vast majority of their roster for 2018, but may find themselves needing to fortify their central midfield. They struck gold by selecting Cristian Roldan in the 2015 draft, and might be hoping another talented midfielder falls in their lap this time around.

Sporting Kansas City – Striker
When SKC traded Dom Dwyer for a then-record amount of allocation money last summer, it was assumed the funds would be used on another goal scoring threat. That remains to be seen, and the mountain of money grew again as Feilhaber was dealt to LAFC. While they’re likely to look elsewhere for their starter, LAFC also pilfered Latif Blessing from Sporting this winter, and another attacking prospect is needed.

Toronto FC – Fullback
The champions will most likely take the best remaining player at the end of the first round, but the loss of Steven Beitashour and Raheem Edwards leaves a weakness at outside back. With left back held down by Justin Morrow, the right side seems ready to add another talented piece.

Vancouver Whitecaps – Goalkeeper
With longtime netminder David Ousted off to DC, the Caps should look to find a suitable backup (or competitor) for New Zealand international Stefan Marinovic. They’re a logical choice to take the first goalkeeper of the draft, but there are a few talented prospects to be had in the 2018 class if they elect to wait.