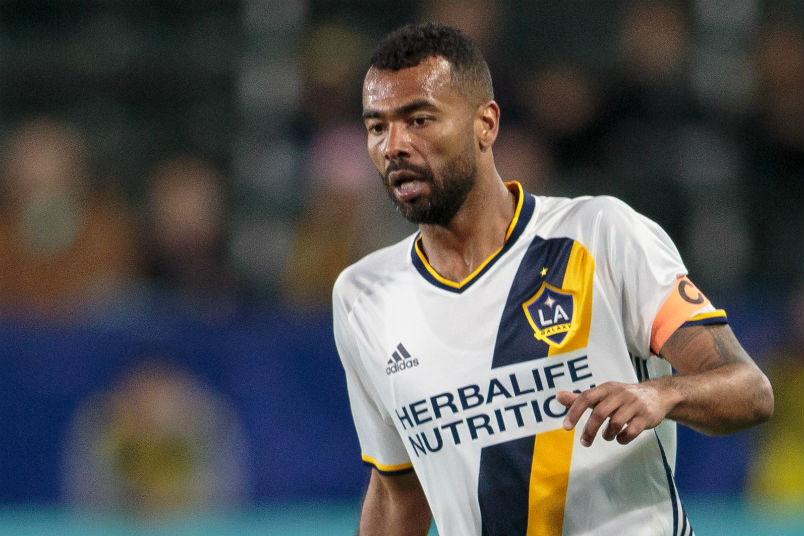 By Luis Bueno – RIVERSIDE, CA (Feb 14, 2018) US Soccer Players – The LA Galaxy’s long road to redemption has not yet commenced, but the team revealed some of what it has planned for the 2018 MLS season. When the Galaxy played NYCFC at StubHub Center over the weekend, the team had its new captain on display. Ashley Cole donned the armband on Saturday and later revealed on social media that he had been named the club’s skipper for 2018.

Cole certainly seems a logical choice to help guide the Galaxy from last place to respectability. Still, that logical choice also comes with some concerns. How much the positives outweigh the negatives in this move by season’s end will likely mirror how successful the 2018 MLS season winds up for the Galaxy.

Other things may seem more important, and that is true of several issues the Galaxy face ahead of the season. Will the team have a dependable striker? How will the midfield shape out? Is Sebastian Lletget recovered and ready to take off as he was close to doing a year ago? There are enough problems to fill a 100-question exam. If it all collapses it may all be traced back to how the captaincy role fizzled out.

Perhaps the biggest sign of optimism to come from Cole’s captaincy is how this reflects on the approach to 2018 and how different it is from a year ago. Ahead of the 2017 season, the club placed its hopes and expectations on its own system. LA Galaxy II had provided the club with a coach – Curt Onalfo – and several players who were expected to play significant roles. This year, Cole is captain despite being the oldest player on the team.

It shows that not only has the team moved past the notion that LA Galaxy II will serve as more than just a USL team but that experience matters. This version of the Galaxy understands that team chemistry is vital.

The Galaxy whiffed on that a year ago. Coming off of a strong 2016 performance, the Galaxy named Jelle Van Damme captain last season. It didn’t turn out as expected. Onalfo pulled Van Damme in the first-half of a game against Chicago in early May. The Galaxy responded with a come-from-behind draw and an eight-game unbeaten run that proved to be the highlight of the year.

It all fell apart soon after. Smoke and mirrors helped the Galaxy make the run. When the smoke cleared and the mirrors failed to reflect anything, the team suffered. Van Damme was gone by the summer, as was Onalfo.

Incoming coach Sigi Schmid started with Jermaine Jones as captain. That role wasn’t set. Cole wore the armband for stretches during the second-half of the season. So did others. The rotating captaincy was a reflection on how poor the season went for the Galaxy.

2018 starts with that all on Cole’s shoulders. The role of captain matters, especially for a team attempting a turnaround like the Galaxy. Going with experience also means going with age, and that’s an issue for Cole.

Cole needs to be around this season. He needs to be on the field wearing the armband. If by season’s end Cole’s captaincy has worked out, then it will likely mean the Galaxy is in contention not just for a playoff spot but for a run at MLS Cup. He’ll be trying for that as a 37-year-old.

Even for a professional athlete known for maintaining excellent shape, playing meaningful minutes at 37 is asking a lot. There are certainly few indications that Cole’s body is about to give out on him. He has played 26 and 29 games with the Galaxy in his two seasons here.

The demands of the sport are real. Former Galaxy captain Robbie Keane hit the wall quickly and unexpectedly. Keane had played in 28, 23, 29 and 24 games a year from 2012-2015 before injuries racked his body and limited him to 17 games during the 2016 season, his final year with the club. He went from being an integral part of the club to out of the team altogether in less than 12 months. Keane is only five months older than Cole.

What will the Galaxy do if they can’t rely on Cole? Perhaps once the season is running a clear-cut choice for captain will present itself. After Cole, the options seem difficult for several reasons. Many players have not been around long enough to establish themselves as a significant member of the club. Giovani Dos Santos would be a logical choice, but he’ll also be gone this summer on World Cup duty. A great choice for captain would likely be Baggio Husidic but he is not a first-choice midfielder.

That’s just a concern right now. Cole is healthy. The role is his. The hope is the team responds to a strong captain with Cole’s experience, avoiding the dips of last season. This year is a key turnaround season for the club. The team needs to compete against LAFC. A playoff appearance is the minimum the Galaxy needs to accomplish to regain its standing.

Cole will provide the leadership. From there, it’s up to the team to respond.