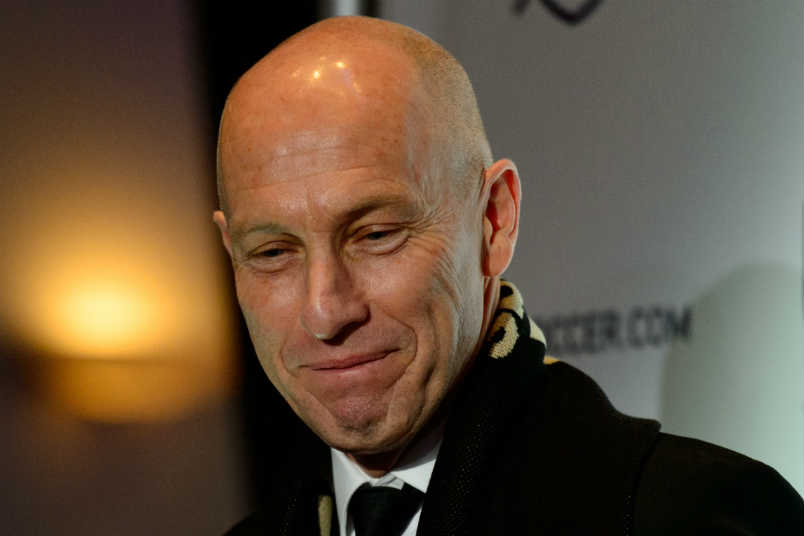 By Clemente Lisi – NEW YORK, NY (Feb 26, 2018) US Soccer Players – The start of a new MLS season means predictions. There are some easy ones to make. Toronto FC repeating as MLS Cup champions tops that list. Atlanta United turning into a title contender is also an easy option. Then there’s LAFC, and things get complicated. Can the latest MLS expansion team compete in year one amid all the hype and fanfare as LA’s new soccer club?

The centerpiece of the LAFC debut is the return of Bob Bradley to MLS. While LAFC has no history or tradition to grab on to, past success in the league is all too familiar for Bradley. The former USMNT coach was in the same position 20 years ago when he took the coaching job with the expansion Chicago Fire. Bradley rose to the challenge that year with his Fire team winning the 1998 MLS Cup. They remain the only expansion team to win it all in year one, taking the US Open Cup as well.

Does the ‘98 Fire tell us anything about Bradley’s plans for LAFC in 2018? Bradley built that Fire squad around the “Eastern Bloc” quartet made up of Polish players Peter Nowak, Jerzy Podbrozny, Roman Kosecki, and Czech defender Lubos Kubik. Ante Razov led the team in scoring with 10 goals that season, while Podbrozny would record 14 assists. Zach Thornton was a big surprise in net winning Goalkeeper of the Year. Kubik took Defender of the Year honors.

A lot went right for Chicago in 98, but it involved considerable risk. The club’s big acquisition was goalkeeper Jorge Campos from the LA Galaxy. Bradley needed the vision and belief to hand Thornton the starting job. He also had to make more than a few moves that turned into big payoffs. Chris Armas, also from the Galaxy, turned into a key part of that ‘98 Fire squad.

Bradley knows what it takes to win in MLS and 1998 could serve as a template for success. While the league has changed a lot in 20 years, Bradley said a mix of experience and youth – loaded with passion and enthusiasm – is what wins games. No matter what era, players with those attributes can come together to succeed. In sticking to his philosophy, Bradley appears less interested in emulating defending champion Toronto FC or flashy sides like Atlanta United FC. Instead, he’s more interested in going back to the future to win MLS Cup again.

At his introductory news conference last year, Bradley was greeted by dozens of fans chanting “Bob the Builder – yes we can!” It’s the words to the theme song to the cartoon loved by preschoolers. It’s also one way to describe a coach who has built teams from nothing. “I’ve taken challenges… Man, I got a chance here to do something that is different and special,” he said.

LAFC has the ingredients to put together a solid season. The roster includes four players who could end up at the World Cup this summer, including strikers Carlos Vela of Mexico, Omar Gaber of Egypt and Marcos Urena of Costa Rica.

Bradley will build LAFC around Vela. The 28-year-old Mexican has loads of experience after his time at Real Sociedad of Spain and at international level. Bradley is a pragmatic manager. When he coached the US and later Egypt, Bradley’s never-say-die attitude translated into some emotional games. Vela is powerful on the right wing and possess speed and a long-range shot. Vela is a clever player and makes those around him better. That’s exactly what Bradley will expect.

Vela is versatile, playing as a center forward as well as on the left. He'll pair with Uruguayan teen phenom Diego Rossi. It gives Bradley two very strong offensive weapons and a mix of experience and youth to build around. In the recent Expansion Draft, Bradley chose Latif Blessing from Sporting Kansas City and Urena from San Jose Earthquakes, both speedy wingers. Urena should start in a three-man frontline, while Blessing could come off the bench. Add Benny Feilhaber, one of the most-creative players in the league, in midfield right behind this attacking trio, and this is an attack that packs a punch.

The attack isn’t the only ingredient needed to win. A strong goalkeeper and reliable backline are also needed. Bradley will again gamble on a young goalkeeper at LAFC like he did midway through the 98 season when he switched to Thornton. At the time, Thornton hadn’t played much as the backup to the great Tony Meola at the NY/NJ MetroStars. This season, Bradley will go with former Seattle Sounders FC backup Tyler Miller. On the bench behind Stefan Frei, LAFC picked up the 24-year-old Tyler in the Expansion Draft. Thornton’s age at the time Bradley tapped him in Chicago? Yes, 24.

Bradley does have lots of experience with younger players. Bradley is responsible for drafting players who have gone on to become household names among US fans: Sacha Klejstan, Carlos Bocanegra, Ricardo Clark, and his son Michael Bradley. In 1998, Bradley drafted defender Ritchie Kotschau, who played left back, out of George Mason University. In January, Bradley drafted defender Joao Moutinho, who was born in 1998. A left back like Kotschau, Moutinho, just 19, out of Akron, was picked first overall and could be a starter this season.

With preseason over, LAFC opens the season this Sunday on the road against the Western Conference champions Seattle. It will be the team’s first steps in MLS. It can also be the start of something very special should Bradley’s past translate into a new team built to win in its first season. LAFC winning MLS Cup may seem like an improbable goal. Then again, it was for the Fire 20 years ago. We all know how that ended.