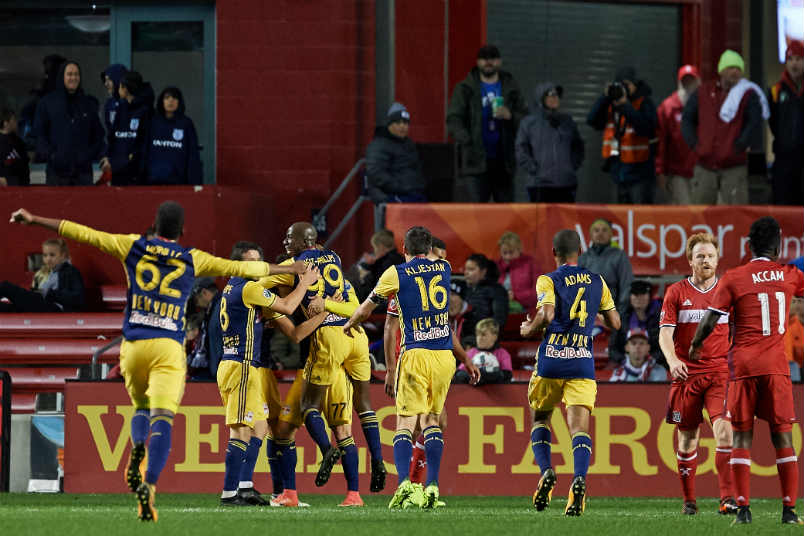 By J Hutcherson (Feb 6, 2018) US Soccer Players - It's easy enough to point out the obvious when it comes to stalled MLS clubs. They're teams where the big announcements turn into yet another issue. Where whatever is the latest version of a tired fan base wait to be underwhelmed.

That kind of lead in might apply to more than a few MLS teams, but the working example is the Chicago Fire. Why Chicago? A tough mix of market size, early success, and unmet expectations.

All these years later, and it's not a safe assumption that newer fans have any idea about what the Fire meant back in 1998. US Soccer's communications department had some fun last week posting a video of the young players in January camp who didn't know what Y2K was. It's been a full two decades since the Chicago Fire won the MLS Cup and US Open Cup double in their debut season. The original NASL didn't last that long.

MLS started with the DC United dynasty, and Chicago should've followed. Instead, they've never won another MLS Cup. Seattle and Sporting Kansas City now match Chicago's haul of US Open Cups. That run ended over a decade ago. Chicago's move to suburban soccer-specificity wasn't unique. The plans vs reality in Bridgeview echoed other issues for other teams in other markets. Chicago wasn't special, at odds with how the club started over the course of that 1998 championship season.

Now, the Chicago Fire is once again looking for relevancy head-to-head with a baseball team that won a World Series in 2016 and advanced to the NLCS last season. It's hard to make a case for soccer in Bridgeview when things are going that well in Wrigleyville.

Most of the time, winning changes things. That's the one truism that applies across sports. Finishing third in the Eastern Conference last season was better than missing the playoffs. Losing at the first opportunity in those playoffs, not so much. Chicago fell to New York 4-0 at home, letting 90 minutes of playoff soccer wipe out the progress the team made over 34 regular season games. They got to the playoffs with the addition of Nemanja Nikolic, Dax McCarty, and Bastian Schweinsteiger.

Coach Veljko Paunovic's second full season in charge was about getting the ball to Nikolic or David Accam. Nikolic scored 24 goals last season with Accam second in the squad with 14. Now, Paunovic's job focuses on replacing Accam's output. The Fire got $1.2m in allocation money from Philadelphia in exchange for Accam. That puts a clear price on goals in MLS, and one Chicago now has to consider in pursuit of a replacement. A loan deal for Alaves' Aleksandar Katai is a potential answer, but that's a lot of pressure on a player a struggling La Liga team was willing to send to Chicago.

If the Fire offense stalls when other MLS teams aren't stressing over covering Nikolic and Accam, This could be a return to form. It could've been worse. Schweinsteiger was out of contract and at least briefly a question mark for another season in MLS. Setting aside the name recognition, he's the type of creative player that makes a difference right now for any team in the league. He showed that a few times last season, to the regret of teams that had to wonder what they needed to do to close him down before yet another incisive pass. That Schweinsteiger only ended up with six assists underlines a problem for last season's Fire. There were times when Schweinsteiger's ball control and vision were wasted by a team that didn't know how to play with him.

Solving that would put the Fire into a different category, capable of playing the type of game that requires more from other MLS teams than simple adjustments. With that in mind, there's an argument that Chicago didn't get enough out of their squad last season. The expectation was for a revelatory style of play in MLS that didn't happen on the field.

Back to those 90 minutes in Bridgeview on October 25, 2017. Bradley Wright-Phillips had New York up in the 7th minute. Sacha Kljestan doubled the lead four minutes later. Every team in MLS has lengthy charts on both of those players. What they do is no secret. Chicago finished that game with fewer shots on goal than New York scored.

“It’s my fault,” Paunovic said following the playoff exit. “If there is somebody to blame, it is my fault because I think we all could do better.”

Once again, that's the story for the Chicago Fire as another MLS season approaches. It's not so much doing better as matching what the club once was. That scenario also isn't unique among the old powers in MLS.