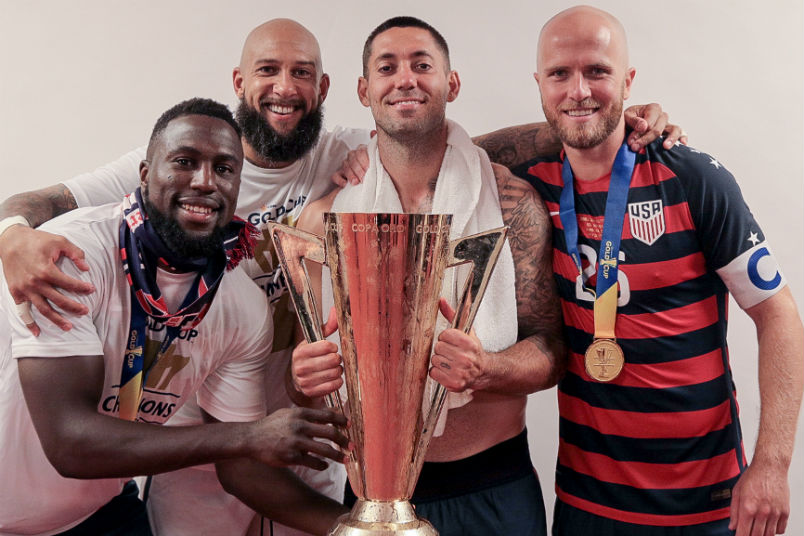 By Luis Bueno – RIVERSIDE, CA (Feb 28, 2018) US Soccer Players – Every two years, CONCACAF trots out the Gold Cup tournament and tries to showcase the best the confederation has to offer. And every two years, the showcase comes short as the tournament always leaves room for improvement.

For the first time, though, those improvements may actually happen. The Gold Cup could take steps toward becoming an actual tournament instead of a cash-grab event that benefits only a few.

CONCACAF announced this week that for the 2019 Gold Cup the tournament would expand to 16 teams. Perhaps more importantly, CONCACAF will move some games outside of the United States. Central America and the Caribbean could see Gold Cup action for the first time.

Not only will the increase in teams change the face of the tournament, adding new venues will transform the event. That could have wide-ranging and positive consequences for the growth of soccer in the region.

Now, soccer is growing in the region. The USA’s 5th-place finish in last year’s Hexagonal and Mexico’s struggles in the previous Hex will attest to that. Costa Rica reached the quarterfinals in the 2014 World Cup, a feat that even Mexico has not accomplished since it hosted the World Cup in 1986. Jamaica has reached the last two Gold Cup finals while Panama played in the championship match in the 2013 edition.

The fact remains, though, that the United States and Mexico have dominated the Gold Cup since its inception. Save for Canada’s win in 2000, either the US or Mexico have lifted the trophy. Sure, both countries have stellar programs in place for the development of soccer, from the youth levels through the professional ranks and the facilities in both countries are top-notch/ Still, the dominance speaks to more than that. Home field advantage counts, and that’s as true for Mexico playing in the United States as it is for the USMNT. Take that away, and it’s the best chance at leveling the field at least a little.

The Americans struggle in Costa Rica, for instance, in World Cup qualifying while Mexico’s lone qualifying loss was a 3-2 setback at Honduras. In fact, Central America’s trio of Honduras, Panama, and Costa Rica had a combined home record of 6-1-8 in last year’s Hexagonal.

Now, CONCACAF did not divulge details or plans about hosting matches outside the United States. According to a press release, CONCACAF is “exploring a pan-regional footprint for the 2019 Gold Cup… including the possibility of matches in Central America and the Caribbean.” It could have a great impact like perhaps playing some group-stage or knockout-round matches in, say, Costa Rica or Guatemala. Or, it could have a minimal impact like Canada’s hosting of Gold Cup matches in 2015. Toronto’s BMO Field played host to one doubleheader during that year’s group stage, a 1-0 Jamaica win over El Salvador followed by a scoreless draw between Canada and Costa Rica.

Having more teams involved will also help grow soccer across the confederation. Expanding to 16 teams would allow for a more even tournament. Four groups of four teams apiece would mean 24 group-stage matches and would also allow for an easier qualification process. The top two teams in each group advance and that’s that. There would be no need for third-place tiebreakers and a complicated knockout-round procedure.

Perhaps that would open the door to what would truly make the Gold Cup a bona fide tournament. Up to now, the “draw” is designed for a USMNT vs Mexico final. There are ways for the two to square off in a quarterfinal or semifinal, but that would involve one of the two finishing the group-stage in 3rd-place and some other unrealistic scenarios. With four groups and group winners facing group runners-up in the quarterfinals, the chances of the regions two traditional powers meeting in early knockout rounds exist, provided the tournament holds a blind draw and the tournament’s complete format is revealed prior to the draw.

For instance, if Group A and Group B winners will eventually meet in a semifinal, and the U.S. and Mexico are in those groups. That would mirror other tournaments like the World Cup and the European Championship where fate decides everything.

While CONCACAF is considering changes, they could follow the lead of both of those tournaments and switch to a four-year cycle. CONMEBOL is currently doing that with the Copa America. It’s a bit much to insist on a confederation championship happening every other year. Resisting the urge to sell tickets every other year is tough.

For now, expanding the tournament to 16 teams and playing matches in new venues will help the confederation grow. That’s the point of the new CONCACAF League of Nations and modifying the Gold Cup. More games that count in the region means more opportunities for all of its countries.