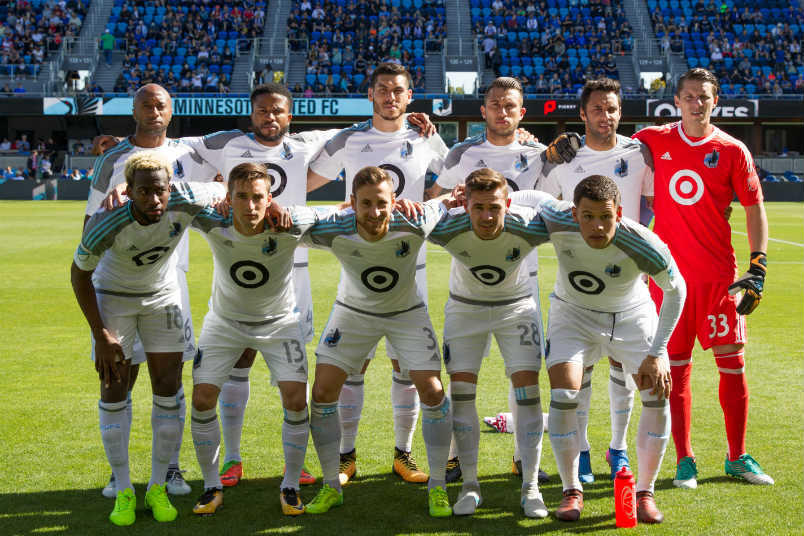 By Jason Davis – WASHINGTON DC (Feb 7, 2018) US Soccer Players – To their credit, it doesn’t seem as if Minnesota United is too bothered by being constantly compared to the other member of their 2017 expansion class, Atlanta United. While Arthur Blank’s flashy exercise in stretching the meaning of “MLS budget” made waves in their initial year thanks to a big name coach, South American attackers, and record-breaking crowds, the Loons stayed true to their pragmatic approach to building out an MLS franchise over several seasons.

It’s not that Minnesota United didn’t want to win games and make the playoffs in 2017, the club simply chose to take a different path on their way to success. It’s not fair to suggest that Minnesota United should have spent on the level of the Southern expansion mates since so few teams in MLS do. That doesn’t mean Minnesota’s approach is beyond criticism. Patience is rarely a hallmark of modern soccer fans. The Loons get slack because they’re new, but they’ll get less of it in 2018 than they did in year one.

With training camp underway and teams around the League in a race to improve, Minnesota United is plodding through the acquisition window. While reports suggest that the club is actively pursuing a young South American player in the vein of many that have arrived in MLS this offseason, to date their incoming player list is rather underwhelming.

There are five names on the list so far. MLS SuperDraft selection Mason Toye, a Generation Adidas forward out of the University of Indiana is one. There’s Tyrone Mears, a 34-year old fullback made available in the Re-Entry Draft. 24-year old Cameroonian, Frantz Pangop, who helped Cameroon qualify for the World Cup but who has never played outside of his native country. Matt Lampson, a goalkeeper, acquired via a trade with the Fire. There’s also the coach’s son.

There’s time left to bring in a few more bodies, but the Loons certainly look like a team that will ride into the new campaign with a team very similar to what finished out last season. Manny Lagos called the 2017 season a “learning curve”. The club acknowledged that they made mistakes. With that in mind, the 2018 approach seems strange.

At the very least, improvement is possible because the group will have the experience of 2017 under their belts. On-field partnerships will have improved, roles will be more defined, and the management of travel and schedule will be better. Several players who figure to play a big part in success or failure in the new year arrived midstream last season. Starting camp with those players in the fold should make for a better start to the campaign.

It’s probably no coincidence that the last eight weeks of the year represented the height of the season for the Loons. Four of the club’s ten wins came in those final eight weeks after Ethan Finlay arrived from Columbus via trade. The improvement came from more than Finlay’s addition. Tweaking a roster that was not good enough in the early going played a big part in turning Minnesota from laughing stock to respectable. The arrival of Sam Cronin and Marc Burch on the defensive side of the ball made a significant difference for a team that threatened to set ignominious records for goals conceded through the initial portion of the season.

Whatever steps forward the club can make, 2018 will be another transition year. MLS wanting to keep the conferences balanced meant playing two full seasons in the temporary confines of TCF Bank Stadium.

Nick Rogers, the man who served as club president until leaving the organization in December, claimed Minnesota United was not engaged in a “soft launch” during the lead-up to their stadium opening. Minnesota United didn’t fill any of its Designated Players slots in their first one. The attempt to assuage fan fears that the Loons aren’t really trying until Allianz Field opens in St. Paul is harder to sell when theirs is the only team in the league without a DP.

Minnesota United fans, perhaps to their credit and inline with the winter weather in their home state, are playing it cool. The move to MLS hasn’t been without its problems, but the continuity from NASL team to top division side in leadership and philosophy fits the community. Minnesota United the MLS entity rests squarely on the foundation built while the team was playing a division down. It probably wouldn’t feel right if the Loons didn’t have native son Lagos at the helm, to point to just one aspect of that continuity.

The season is now less than a month away. Minnesota United opens on the road in Orlando. Between now and then, United should make a few more moves. Perhaps those reports of a South American DP arriving will solidify into something real. Maybe the speculation is enough for fans willing to wait. More than likely, any new additions will be of a less celebrate variety.

Minnesota has a chance to make the playoffs because this is MLS. Christian Ramirez proved he could score goals in this league. With several quality wingers, he should get good enough service to match or improve on the 14 he scored last season. The midfield is better. There’s at least some hope that the defense will have a better sense of how to slow down opposing attackers. There are six available playoffs spots in the 12-team West, the weaker of the two conferences. It might only take a 10-point improvement over last season to get in.

Is Minnesota United better in 2018? On paper, it doesn’t look that way. The club and its fans hope a bit more confidence and the lessons of 2017 will help them pave their own path to success.