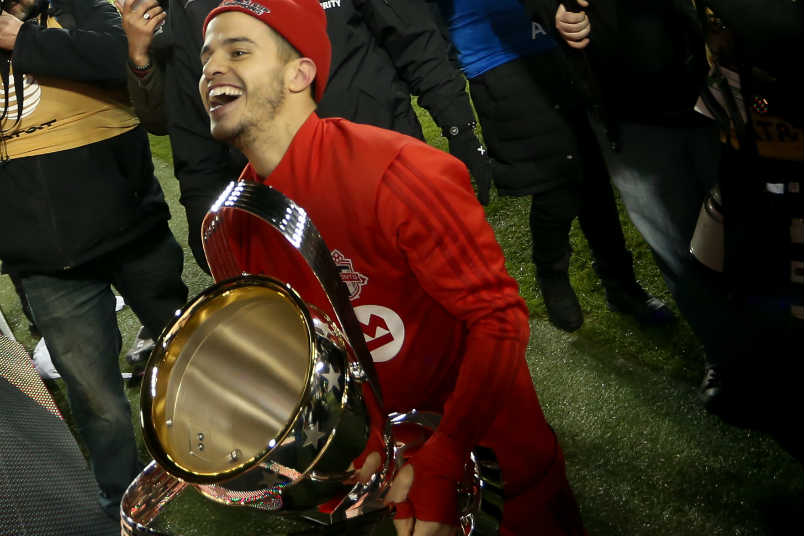 By Charles Boehm – WASHINGTON, DC (Feb 8, 2018) US Soccer Players – It was a striking, long-running curiosity if an arbitrary one. From 2005 all the way up until last season, Western Conference teams won 10 out of the 12 MLS Cup championships. That included a few notable asterisks for clubs hopscotching back and forth across the league’s geographic dividing line due to expansion entrants or quirky playoff seeding formats, but the point was easy to make. The best soccer in MLS happened out West.

It wasn’t just the number of cups, either. A broader sense of ambition seemed to reign in places like Los Angeles, Seattle, Portland, and Real Salt Lake, driven not just by money, but culture and astute leadership. Over time, a solid conventional wisdom took root. The West was the point of this league. That ended last season.

The Columbus Crew proved themselves to be a pleasing and persistently perennial contender under Gregg Berhalter’s leadership. Ambitious Atlanta United arrived to explode just about every expectation for expansion sides. The Chicago Fire rose suddenly from Eastern Conference obscurity, inspired by classy imports Bastian Schweinsteiger and Nemanja Nikolic. NYCFC continued to produce quality soccer despite their cramped Yankee Stadium confines, riding the ageless legs of David Villa and the sharp mind of Patrick Vieira. Then there was Toronto FC delivering on a multi-year project by winning the treble.

All five of those sides finished ahead of everyone in the West in the final regular-season standings. That not only brought the Supporters’ Shield back to the East, but it also had the multiplier effect of practically guaranteeing that an Eastern city would host the MLS Cup final. Perhaps more importantly, it underlined the heightened ferocity of the week-to-week competition in the East, especially down the home stretch of the season when most games are within the conferences.

So will the West up its collective game this year? For months, many observers have probably assumed so implicitly. Another gang of moneyed newcomers, LAFC, are eager to make a splash. Their SoCal neighbors the LA Galaxy have little choice but to go all-in to keep pace after the worst season in their history. Seattle, Sporting Kansas City, and the Timbers appear determined to contend on an annual basis. FC Dallas and Real Salt Lake have carefully nurtured youth-centric movements.

This being MLS, anything is possible. That’s by design in this league, puzzling any pundit who thinks they’ve got the pattern recognition sorted out. Still, an air of upheaval hangs over the Western Conference, where eight of the 12 head coaches have been in their job for under 16 months.

The likes of TFC and NYCFC can ponder how to address finer points and weak spots within their squads. Aiding that is another hefty dose of the lab-crafted MLS performance enhancer that is “Targeted Allocation Money.” Meanwhile, major overhauls unfold in places like Colorado, San Jose, and Portland, raising both the floor and the ceiling of what’s possible for those teams.

Even after a stirring season of unexpected underdog success, the Houston Dynamo are scrambling to sustain that progress, with several prominent players coming and going. Consistently inconsistent teams like Vancouver and Minnesota only cloud the wider picture, even if they don’t appear particularly likely to climb into the mix for trophies.

Money is a major factor here, of course. Depending on how you crunch the numbers released by the MLS Players Union, Toronto and New York City are in general the biggest spenders in the league in salary terms, both investing several million dollars more per year than their nearest competitors Orlando and Chicago. They as well as the rest of the league’s elite are increasingly comfortable shoveling hefty resources towards infrastructure, too, from facilities to academies to data analysis and beyond.

The league’s slow but measurable gains in reputation and respect around the wider soccer world seem to have helped nudge the standard of coaching upward, providing another means for pursuing rapid year-on-year improvements. With all due respect to Bob Bradley, Peter Vermes, & Co, the East arguably enjoys a slight advantage in this category, highlighted by Vieira, Berhalter, Atlanta’s Tata Martino, the Fire’s cerebral Veljko Paunovic, and reigning Coach of the Year and former USMNT standout Greg Vanney at TFC.

Due to a range of circumstances, the East’s weakest 2017 also-rans look better. Cellar dwellers DC United enters a whole new era as their long-awaited new home opens on the Anacostia River waterfront in July. That’s goaded a long-stingy ownership group into loosening the purse strings for some new acquisitions to join USMNT player Paul Arriola, as well as a planned training complex and reserve-team stadium in the Northern Virginia exurbs.

Infuriated by three straight seasons of underachievement in the topflight, Orlando City SC made as many bold moves as anyone in the league. They’ve brought in Sacha Kljestan and several other proven MLS performers with a clear “win now” objective.

The Montreal Impact sprang for a big-name coach, Frenchman Remi Garde, to oversee a sweeping renovation of both the roster and the club’s wider philosophy. They’ve gotten markedly younger, more possession-oriented, and more Canadian in a matter of months.

Veteran MLS watchers see a stronger sense of urgency percolating around the league. It’s easy to spot the stragglers. That should help fuel the hopes of most every fanbase at this time of year. Still, incumbency and momentum tend to be powerful forces, and both tilt in the East’s direction at present.

The conference tested its best and crushed its worst, and the end product was TFC’s all-conquering march to glory. To replicate that rugged state of affairs, those on the left side of the MLS map must not only produce first-class frontrunners, but also lift the level at the bottom end as well. With just under a month to go until opening day, that looks like a lot to ask.