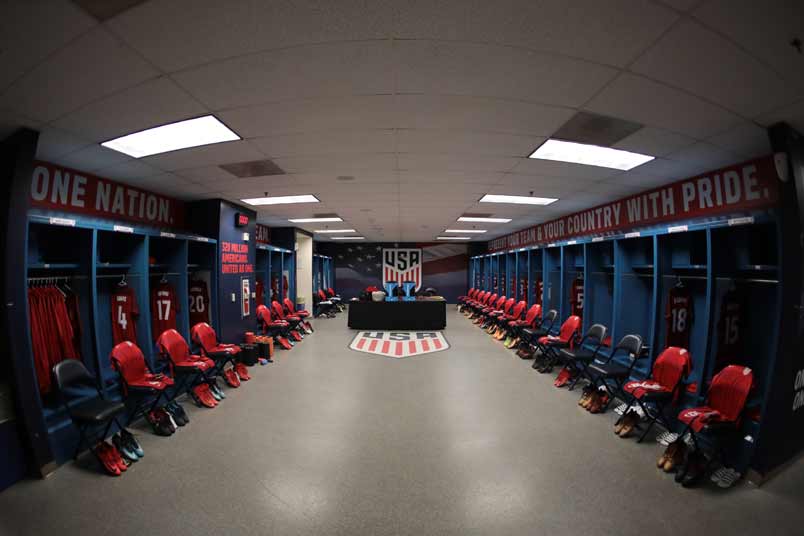 By Charles Boehm – WASHINGTON, DC (Feb 2, 2018) US Soccer Players – Let’s start by acknowledging the obvious: Sunday’s 0-0 friendly draw vs. Bosnia & Herzegovina was no thing of beauty, and probably won’t live long in the memories of many USMNT supporters.

Yes, it always matters when you don your country’s colors and take the field in a competitive match. That’s especially so for those several players who made their senior-team debuts that night. No, the quality and spectacle of this occasion did not quite reach the levels that people both inside and outside the program expect. That shouldn’t have been a great surprise to anyone familiar with the context of this situation, though.

By its nature, the USMNT January camp is a pragmatic preseason activity and has been for most of its existence. It’s a chance for MLS players, and a handful of others from leagues with spring-to-fall calendars, to put in work in a national team environment. At this time of year, they might otherwise be training alone, or in small or less-formal groups. That impacts the quality of play. Even with that in mind, there’s still the potential for upside. Consider how many established USMNT contributors quietly got their start at January camps, like Pablo Mastroeni, Matt Besler, and DeAndre Yedlin:

That raises the question, just what are the takeaways from last month?

Yahoo!’s veteran columnist Leander Schaerlaeckens headlined the ranks of those who felt Sunday was a badly missed opportunity, and with reason. Calling it “business as usual” in the very worse sense of that term, he cited absurdly high ticket prices at StubHub Center, an overabundance of older US faces on the field, and the general sense of tone-deafness enveloping Dave Sarachan and the US Soccer Federation as a whole of late.

It’s hard to conceive of how anyone could mount any sort of defense of the Fed’s typically astronomical ticket prices. The high costs of entry are an obvious long-term issue that has insidious but real consequences. Hopefully, the federation’s new leadership will consider that worth addressing. Most fans and stakeholders are demanding that the new president take action on the insensitivity/disconnection problem, too.

Sarachan’s tactics and personnel selection are certainly not immune from criticism. That said, the factors surrounding his current role and position make him such an easy target. The USMNT has now scored just one goal in 180 minutes of match action under his guidance. Given the low-risk circumstances, that isn’t much fun. We’re required here to acknowledge that they only conceded one, too, even if no one’s all that inclined to celebrate such stinginess right now.

Yet the demand for the USMNT to be packed solely with young players for the indeterminate future, while a common sentiment, needs some unpacking.

For some, it’s easy to set aside CONCACAF’s new League of Nations and the Gold Cup. With that line of thinking, the Yanks won’t play a game that counts enough for years, not until the qualifying process for the 2022 World Cup cranks up. So between then and now, why waste time and effort on anyone who won’t be in or approaching their prime by that point?

It’s a seductive idea. Clean house! Don’t trust anyone over 30, or 25, or maybe even 21! It’s especially potent at this fraught moment in US Soccer politics. There’s a presidential election in process complete with the predictable sloganeering. BURN IT ALL DOWN, as some inspiring voices intone.

This is also a good time to second-guess that bit of conventional wisdom too, though. On Sunday night I found myself thinking about how other languages dub what we call “the national team” in English, and how subtle differences can hint at deeper ideas.

In many Spanish-speaking countries, the most common term is “selección,” and its Portuguese-speaking cousin is “seleção.” And you don’t have to be a polyglot to pick up the distinction. It’s by definition a team, yes, but not solely that. It’s a selection of a nation’s top players. The best of the best, or at the very least, a reasonable stab at the coaching staff’s definition of that.

The broad diversity of nations and leagues where Americans play their club soccer makes this a tricky and inherently subjective process for every US coach, past, present, and future. While he can’t be ruled out of the hiring picture yet, we all know Sarachan most likely isn’t going to be overseeing that process for more than a few months during this time of transition. Most of us can find at least a few quibbles with his decisions. Still, it’s his job to try, and so he did, even if it meant the relatively unpopular decision to start a few older players like Justin Morrow, Ike Opara, and CJ Sapong.

Many observers do some simple math and conclude that guys like this will be too far into their 30s by the time Qatar 2022 rolls around, blocking the path forward for younger faces. While there might be a traditional statistical basis for thinking this way, ignoring history’s many prominent exceptions to it does the discussion a deceptive disservice. No one but Father Time, and perhaps Lady Luck, gets to decide in the end. Longevity is both a gift and a skill, and it’s helped the USMNT on big stages.

Consider Kyle Beckerman, who fortified and organized the base of the US midfield in Brazil four years ago at the grizzled age of 32. That was years after his international career had been widely written off. Or Fernando Clavijo, the skilful and cerebral veteran influence of the 94 World Cup squad at an eye-popping 38.

The reverse is also true. Bruce Arena had plenty to lose when he brought in 20-year-olds Landon Donovan and DaMarcus Beasley on a fast-track schedule to inject his 2002 side with youthful vigor As it turned out, he added world-class quality regardless of their experience. We’ve all heard coaches say “if you’re good enough, you’re old enough,” and it’s only fair to extend similar open-mindedness to those on the other side of the bell curve.

Programs the world over definitely do turn the page on players, eras, even generations. Every case is different, and it takes adept leadership to make it a stable, credible process. One of the fundamental principles of that social contract is the root assumption that players earn their place in the national team. Potential certainly counts, but so does experience.

No matter the scale of your rebuilding process, it has to mean something to be selected. Morrow, Opara, and Sapong earned this chance by being the best in MLS, or very close to it, at their particular roles last season. The same goes for teenage midfield dynamo Tyler Adams.

Anyone younger or with a smaller reputation than them had two weeks of training sessions in which to state their case. It was Sarachan’s task to lead and evaluate that competition, then make his lineup calls. We can absolutely question his judgment there. I would not hesitate to posit a list of such critiques, starting with the decisions to leave Kelyn Rowe out of the starting XI and to not even dress Christian Ramirez.

Second-guessing the merit of those judgment calls is something else entirely. It risks draining even more meaning and intensity from the January camp when we’ve already got enough to worry about.