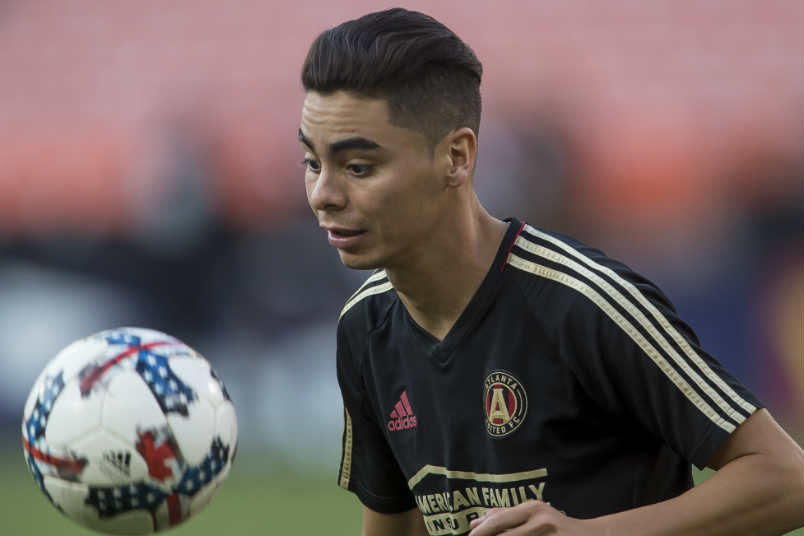 By Clemente Lisi – NEW YORK, NY (Feb 19, 2018) US Soccer Players – When the USMNT takes on Paraguay next month, it won’t be just another friendly. It will also highlight the growing relationship between MLS and the South American nation of just 6.8 million. While it’s true that waves of foreigners have come to play in this country since the league began in 1996, it’s the quality, age, and nationalities of those players that has changed over the decades.

The league’s early years featured established global stars such as Marco Etcheverry and Roberto Donadoni. Starting in 2007, the arrival of David Beckham ushered in the Designated Player era and spending on European stars, some past their primes. Last year, a new generation of budding stars – mostly from South America – became a welcomed addition to the league.

Several of these players now come to MLS via Paraguay. The small, landlocked nation has a long soccer pedigree stretching to the first World Cup in 1930 when the US defeated Paraguay 3-0 in the group stage of that very first tournament in Uruguay. Nearly 90 years later, some of the best players from Paraguay’s youth ranks are coming to play in the United States.

The signing of Miguel Almiron by Atlanta United FC in 2017 was a harbinger of things to come. Having coach Gerardo “Tata” Martino, who had guided Paraguay to the quarterfinals of the 2010 World Cup in South Africa, in charge certainly helped in getting Almiron, who is now 24, to play here. Almiron’s success in the club’s first season has helped other Paraguayans decide to play in MLS ahead of the start of this season.

“The level of play that was here really attracted me,” Medina, who had drawn interest from clubs in England and Italy, told MLSsoccer.com. “Then I saw Almiron over here, and it drew my attention. I spoke to Miguel, he said the level was really good and was growing a lot, and that’s one of the things that piqued my interest in coming here.”

The opening of the Paraguayan pipeline – like the one MLS has established in recent years with first division clubs in Argentina and more recently Venezuela – has helped teams land two young DPs this winter: Jesus Medina to NYCFC and Josue Colman to Orlando City. Both Medina (age 20) and Colman (19) are considerably younger than Almiron. Their arrival brings the total to four the number of Paraguayans in MLS. Before Almiron’s arrival last year, there had been just three players from there signed by MLS since Lider Marmol played with the Chicago Fire in 2008.

Paraguayans playing in the United States is nothing new. Only two players from that country ever made an appearance in the NASL. Julio Cesar Romero and Roberto Cabanas played for a star-studded New York Cosmos at a time when it dominated the league.

The arrival of younger South American talent this time around coincides with many MLS teams trying to shift focus from established veterans to young players with potential. At NYCFC, now-departed stars like Andrea Pirlo and Frank Lampard were the type of players the team was looking to sign at one time. Medina’s arrival this winter is a reversal of that strategy. Ditto from Orlando City, a team that until recently had featured Brazilian legend Kaka, deciding to sign a teenager in Colman.

Jerry Laterza, a Paraguayan American, played for the Los Angeles Galaxy in 1997 and now runs a youth academy in Newport Beach, CA. As the first American to play in Paraguay, Laterza said he thinks the mentality has changed and that young players are more willing to leave home and play in America.

“The Paraguayan player is more open to leaving his country and choosing to play in countries other than Argentina and Spain, places where many of them preferred to go in the past,” he said. “They want to learn English and play in America. It’s harder to get homesick with the technology these days, and the mentality has definitely changed.”

NYCFC’s Sporting Director Claudio Reyna called Medina a “talented attacking player who can play as a winger or number 10 and will fit really well into our system and style of play” as the team continues to prepare for a new season, which starts next month. Medina played for Club Libertad, where he made his pro debut at age 15 and led helped the team reach the semifinals of the Copa Sudamericana last year. Medina has also played for his country’s U-17 team, scoring seven goals in 15 appearances, before advancing to the U-20s at just age 17.

“He is a left-footed technical player with a quick turn of pace, who can score and create goals for his teammates,” Reyna added when the announcement was made official in January. “Jesus has many exciting qualities and combined with his work ethic will be a great addition to our club.”

The injection of foreigners who are both young and gifted has meant a higher quality of player and much-needed flair for MLS. A lot of that is due to Almiron and the trail he’s blazed for his countrymen. Laterza said Martino’s appointment as Atlanta coach last year was the impetus for these recent moves and that Almiron’s arrival has changed perceptions back in Paraguay.

“I walked through the airport in Atlanta recently and just seeing Almiron’s jersey for sale there was really cool,” he said. “Soccer, in general, has grown in this country. Martino’s presence helped. It all depends on the coaching and the players he can attract. Martino was the main factor because he coached Paraguay and was willing to focus on youth. I think it’s great for MLS and for soccer in Paraguay.”