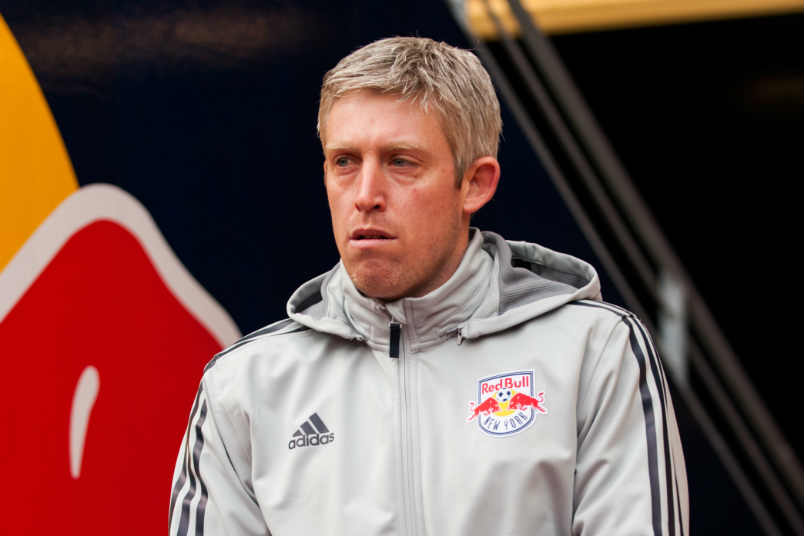 By Jeff Rueter – SAINT PAUL, MN (Feb 8, 2018) US Soccer Players – Last month marked the five-year anniversary of the partnership between MLS and USL. The move integrated the MLS reserve teams into USL Pro, then a quaint 13-team operation, allowing for the reserve players to face better opposition on a regular basis.

It’s been a mixed bag of results for the “MLS2” teams. In 2017, 10 USL clubs were owned and operated by MLS sides, while another 11 forged partnerships with top-flight teams. The 10 MLS2 sides averaged 2,011 fans per game, a figure that’s 3,000 lower than the independent USL clubs’ average. However, these teams have begun to figure out the sweet spot between developing future players and being contenders in USL itself.

Perhaps no club has found this middle ground like the New York Red Bulls. John Wolyniec, a former striker who played in MLS for 12 seasons, coaches Red Bulls 2. “Woly” was a member of the Chicago Fire from 2000 to 2002, where he shared a locker room with current Red Bulls boss Jesse Marsch. That camaraderie has only grown stronger as coaches.

“That kind of connection really helps,” Wolyniec told US Soccer Players. “It’s a tricky balance. We try to focus on the environment first to ensure it’s a professional environment where each player is valued. Jesse watches every NYRB II game, which is huge for a player’s mentality.”

Red Bulls 2 has been a very successful side in USL competition since Wolyniec took over in 2015. In his first campaign, the team fell to the Rochester Rhinos in the semifinals at the mercy of penalty kicks. The following year, the team stormed back to set the single-season USL goals record (61), win the Eastern Conference in the regular season, and ultimately lift the USL Cup. This year, it was pipped in the conference final by eventual champion Louisville City.

The prevailing narrative around the MLS2 program is that teams are just looking to develop a player’s skill set over the course of the season, often at the expense of competing in the USL. To Wolyniec, it’s almost impossible to separate the two methodologies.

“We’ve found a good balance. You can say we’re a developmental team. Well, focusing on winning is important as far as match preparation, building momentum, knowing your opponents… it adds to the pressure. It’s not always easy, but we’ve found a good way.”

The senior team has seen some crucial contributions from former RB2 players, most notably Tyler Adams and Aaron Long. Meanwhile, Marsch’s appointment in 2015 coincided with former Homegrown Matt Miazga’s breakthrough into the starting lineup. The recent uptick in contributions from young, defensive-minded players may be a sign of a growing trend across the league.

“Some of that comes from the way that MLS is built,” Wolyniec mused. “With DPs, TAM, and the new discretionary allocation money, those resources tend to be used on attackers. There’s less room for creative players to move up. A lot of it comes down to where the needs are on the MLS roster. We challenge our defenders in a more complicated way, which sets them up to succeed.”

The Red Bulls continue to be one of the more youth-driven teams in MLS, also giving a place for American talent to take the field in key moments. The homegrown midfield quartet of Adams, Alex Muyl, Sean Davies, and Derrick Etienne combined for 99 MLS appearances in 2017. Each figures to see even more time on the field in 2018.

Still, Wolyniec makes a good point. As teams find additional resources to bring in higher-wage players, this will often stunt the growth of young American attackers. San Jose’s Tommy Thompson has seemed on the cusp of a breakout since debuting at 18 in 2014, yet has regularly been blocked by older international players in ensuing seasons. Similarly, Jose Villarreal went from being a Los Angeles Galaxy starlet after scoring at age 18 in 2012 to finding himself moving to Orlando City after going through the league’s waiver process. It’s a trend that may begin to change in the coming years.

“Maybe we’ll see more attackers move up,” the striker-turned-coach projects. “I think things will start to transition. I think the MLS academies are producing better players. As this goes on, you’ll start to see more American attacking talent in that way. In the short-term, it hurts, but there will be a turning point. Where it goes from there, I don’t make enough money to know.”