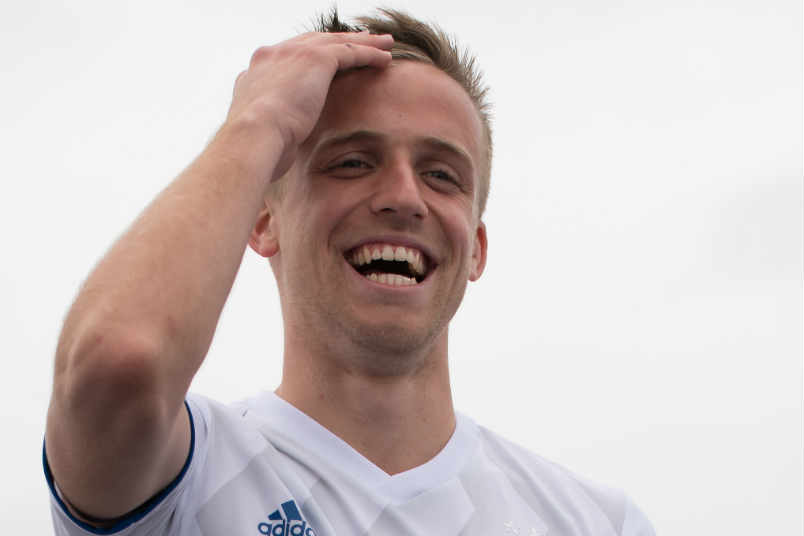 By Charles Boehm – WASHINGTON, DC (Feb 23, 2018) US Soccer Players – History shows that being a “next big thing” in American soccer can quickly turn into a millstone around young players’ necks. So as he begins his fifth year as a professional, you could forgive Tommy Thompson for being tired of the tag.

The youngest of former USMNT player and 1984 Olympian Gregg Thompson’s three soccer-playing sons, Tommy has grown up immersed in the beautiful game. He finished high school a full year early to head to NCAA powerhouse Indiana alongside his older brother Tanner, then left college after just one season. He signed with the San Jose Earthquakes as their first-ever Homegrown Player. Thompson soon followed his father’s footsteps into USMNT colors as a member of the 2015 U-20 World Cup team.

As he made his MLS debut in 2014, Thompson was becoming something of an underground phenomenon. He’d already turned heads with a vibrant, improvisational style of play – even when he was on the bench, thanks in part to a habit of flashing juggling tricks during halftime. After a childhood spent immersed in his dad’s soccer camps and family pickup games, he came of age as American soccer entered the “mixtape” era, first learning from and eventually becoming the subject of YouTube skill compilations.

“I was just constantly in an environment with older players, and we’d spend so much time doing just skills after skills after skills,” Thompson said of his upbringing in a wide-ranging conversation with USSoccerPlayers.com this week. “It drove me crazy at the younger ages, but now I’m all the more grateful for me dad showing me the way. And Ronaldinho, honestly, was a huge part of it as well with his Joga Bonito videos, because that motivated me from age 12 to 17 – well, 12 to 22! – to go out there and just be with the ball.”

“That’s why I juggle at halftime because that brings back those memories. I would juggle for hours. There was times when I would juggle for four to five hours with my buddies because we would constantly joke around. ‘Ahh, you can’t do this trick! Now try to do this one.’ We’d just go back and forth, and that came from Ronaldinho. I know I won’t be the player he was, but I’m really happy with what I learned from him. He made me fall in love with the game.”

Thompson started only a handful of MLS games in each of his first three seasons as a pro, tasked with a variety of positions and struggling to get on the scoresheet. He spent long stretches on loan with USL side Sacramento Republic before finally carving out a bigger role in San Jose last year. In 2018 he’ll play under the fifth coach of his Quakes tenure, new boss Mikael Stahre.

At age 22, he’s not quite a trendy teenage prospect anymore: The future is now. In that regard, he’s something of a test case for MLS’ relationship with young domestic players, especially creative ones. Is he primed for a timely breakout? Mismanaged on the pathway to success? Or perhaps unfairly overhyped in the first place?

“Any time there is hype, there’s also going to be negativity,” Thompson said, pausing here and there to consider his words. “When somebody praises somebody, there’s going to be somebody else that doesn’t agree with that praise and they’re going to criticize that person. So I don’t look too much into it. But I do appreciate all the support from any of the people that do like watching me play, because my goal is to make people excited. I want people to watch games that I’m in.

“I just want to be an entertainer and I want people to like soccer. I think that’s what this sport needs at times,” he continued. “Guys like Miguel Almiron or Darlington Nagbe or Diego Valeri, we have a lot of skillful tricksters in this league and that’s what excites people. So I want to contribute to the growth of soccer in America, and I think that’s what it’s going to take to get the fans that aren’t hot or cold on soccer – that just kind of shrug their shoulders when they hear about a soccer game. I want to get those guys paying attention.”

Statistics suggest that MLS lags behind the world’s top leagues when it comes to developing and featuring young talent, particularly the homegrown variety. The recent spike in spending on imported talent appears more likely to sustain that state of affairs than to challenge it. Yet Thompson has no desire to paint himself and others like him as victims of those circumstances.

“If I’m in a situation where the starting 11 has talented players, if we’re paying guys a million dollars and they’re scoring 10 goals a year up top, or they’re scoring 10 goals out wide, then I need to adapt. So that’s what I’ve done, and I’m grateful because the coaches I’ve had have taught me a lot about the game. So I think now I’m a much more well-rounded soccer player,” he said.

“It’s just the nature of the beast. Look, if I put myself in any MLS coach’s shoes, your focus is on the next game. Your focus isn’t on an 18-year-old kid’s development. And so I understand why a lot of the coaches in MLS play older players – it’s because if your job’s on the line, that’s what they’re comfortable doing. I hope, and I think, that mentality is changing. I’ve seen it already, just with our Earthquakes teams alone, I’ve seen it with Salt Lake as well, one of our Western Conference opponents. I also see it in other leagues with young players like [French phenom Kylian] Mbappe, [others,] you name it, are doing amazing things. I’m hoping that Major League Soccer looks to these leagues and sees what we can become.”

Thompson is hoping that a breakthrough at the club level can sooner or later help him make a case for a USMNT shot as the program retools towards the 2022 World Cup cycle. Rising from the U-20s to the senior national team can be one of the toughest leaps in international soccer. Right now, no one’s sure just what the next head coach will want.

Here he makes a striking note. His father Gregg was a member of the last USMNT squad to fall short of World Cup qualification, making his last appearance for the team in their final match of the 1986 cycle. Back in October, Tommy, Tanner, and Gregg sat together in a San Francisco restaurant and stared in disbelief as the stomach-churning events of the final night of the 2018 Hexagonal unfolded disastrously.

“It was extremely difficult to watch against Trinidad, to see everything that happened that night,” said Tommy. “Watching that with [his father] gave me a whole new perspective of what that might be like for those players.”

As a player, Gregg Thompson was in some ways his son’s antithesis. He was a gifted athlete who came late to high-level soccer for a simple reason. There weren’t a lot of soccer options in Stillwater, Minnesota in the 1970s. Thompson mastered the finer points of the sport at Indiana in time to help the Hoosiers win the first of their eight NCAA championships in 1982. That led him to the old NASL, where he won Rookie of the Year honors in the doomed league’s second-to-last season of existence before carving out a brief indoor career in the MISL.

Tommy credits his father’s steady lifelong guidance for both his soccer abilities and the resilient mentality to weather the twists and turns of his professional journey to date.

“It is important for players to adapt to different systems and to serve a role and find your niche in any team that you’re on, but he wanted for me to understand that I can never lose what got me here in the first place,” said Thompson. “I want to encourage young players to be themselves. And if the coach isn’t allowing them to perform on the platform because they’re not playing, to go to a different platform. Go to the affiliate or go on loan somewhere, because you’ll never be successful if nobody sees what you can do.”

Like his favorite players of the past and present, Thompson doesn’t shy away from the spotlight both on and off the field, from audacious flicks and tricks to social-media dance moves that quite literally got him on the local nightly news. It’s a useful trait for a Quakes franchise still playing catchup in its efforts to charm the influential Bay Area sports scene. In these times of self-reflection, American soccer as a whole can probably use more such risk-taking exuberance, too.

“I’m not scared anymore. I know not everybody’s going to like me as a player, so why not just be yourself? That’s another thing I learned from Ronaldinho,” Thompson said. “Now this is my fifth year in the league; I know who my friends are and anybody outside of that circle, if they’re not going to like me for having fun, posting a dancing video, then that’s OK with me! That’s who I am, and people don’t have to like me … I just want to stay happy, stay dancing and hopefully score more goals than I did last year.”