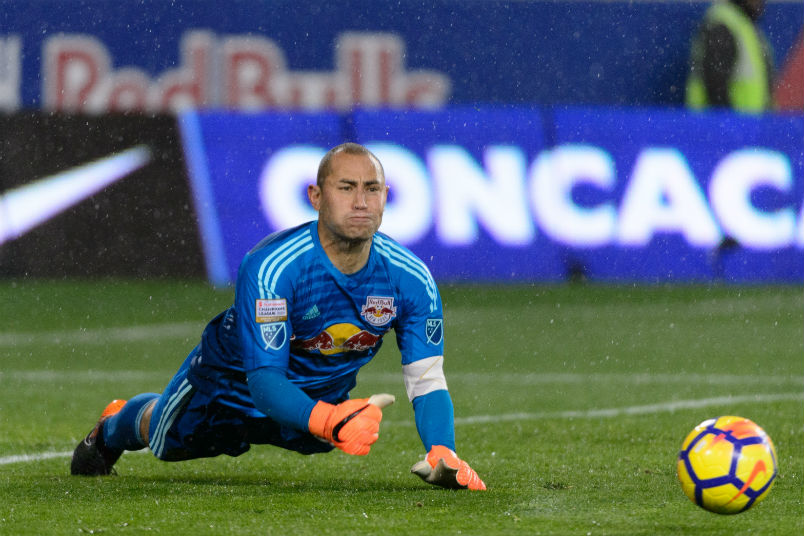 By Jeff Rueter – SAINT PAUL, MN (Mar 8, 2018) US Soccer Players – Facing off against a Liga MX side in the Concacaf Champions League is never an easy ask for MLS teams. Doing so in Mexico is even more intimidating. So, with his New York Red Bulls lining up on Club Tijuana’s home turf, it seemed as if Luis Robles was going to need a total headstand to help keep his team in the running. And boy, did he deliver.

Facing off against an inspired Tijuana side, Robles was able to keep a clean sheet through to the final whistle. He parried, punched, and caught his way to 13 saves, including a near-miraculous five over the course of 10 minutes to close the first-half. It’s a performance that rightfully will live in Red Bulls lore for years to come. Coupled with Bradley Wright-Phillips’s brace, New York now returns to Harrison, NJ with a chance to earn its first CCL semifinal berth.

Now 33 years old, Robles’s path to Tuesday’s career-defining performance was certainly a winding one. Drafted 50th overall by DC United in 2007, the goalkeeper signed with German side Kaiserslautern, beating out then-prospect Kevin Trapp to be the side’s starter for the bulk of the season. After a Gold Cup call-up absence hurt his club stock, he moved to Karlsruher SC, starting 28 games across two seasons. Robles came close to signing with Vancouver in 2012, but once that fell through, he nearly retired entirely to become a realtor. Instead, New York picked him up in the allocation draft. Once starter Ryan Meara fell to injury, Robles got his shot and hasn’t looked back since.

In a league that boasts all three of the USMNT’s 2014 World Cup-rostered goalkeepers, it may be Robles who’s in the best current form. Much like compatriot Nick Rimando, Robles is often overlooked in conversations about MLS’ best netminders. Possibly literally overlooked, in part to both keepers standing below six feet tall. Robles has been a model of consistency for a Red Bulls franchise that now goes through annual offseason overhauls.

Robles’s moment in the spotlight came in the 2015 MLS season, He won Goalkeeper of the Year in coach Jesse Marsch’s first year in Harrison. That Red Bulls team had Dax McCarty, Felipe, Sacha Kljestan, and Wright-Phillips to form one of the league’s most consistent spines. Since then, New York traded all three midfielders within the league, fostering a youth movement in the center of the park.

All three traded midfielders involved massive capitol trading hands. McCarty’s shocking move to Chicago brought $400,000 of GAM. Kljestan and $150,000 of TAM went south to Orlando in exchange for enigmatic attacker Carlos Rivas and promising center back Tommy Redding. Felipe along with $500,000 of allocation money and an international spot ended up in Vancouver for US youth international Tim Parker.

All three moves create a narrative of worth around the players. Whether you agree or not, McCarty was the most “valuable” piece that New York shipped, while Kljestan’s departure required a little extra deal-sweetening. Felipe, meanwhile, was something of a secondary piece in Parker’s capture. As MLS teams continue to use allocation money to acquire players from within the league, we’re still a few years away from finding a true market valuation for players based on age, position, and track record. Dom Dwyer has seen his former record-setting move surpassed by Darlington Nagbe’s move for at least $1.05 million in allocation money.

Field players of all types have seen their names attached to a figure of outgoing allocation money. However, there isn’t a track record of starting goalkeepers going for funds. Last winter, Minnesota United brought in Bobby Shuttleworth by sending expansion draft pick Femi Hollinger-Janzen back to New England. David Ousted left Vancouver in exchange for a second-round SuperDraft pick. The only notable goalkeeper traded for allocation funds this winter was David Bingham. The Galaxy picked up his rights for $200,000.

Bingham is a quality goalkeeper with three USMNT caps, but he’s still likely a rung below Robles on the league’s goalkeeping ladder. In 2017 salary, Bingham’s near $200,000 figure was less than half of what Robles made in New York. It’s fair to say it’s deserved, but the goalkeeper position is still likely undervalued in MLS circles. Only six keepers earned more than $250,000 in 2017, with five playoff starters earning $105,000 or less.

It’s tough to put a value on a goalkeeper. Aside from pure saves and goals allowed figures, there are few widely-accepted measurements for a goalie’s success. American Soccer Analysis is trying its hand with expected goals allowed, valuing saves similarly to the more popular expected goals statistic. For reference, Robles’ -2.18 xGA figure ranked fourth in 2017, behind Brad Guzan, Tim Melia, and Bill Hamid.

A thankless position, these players are more often blamed for individual gaffs than praised for consistent success. It’s easy to understand why clubs pay strikers so well. After all, a team can’t win a game if it doesn’t score goals. Still, perhaps it’s time to gauge the value of the league’s best goalkeepers, including Robles, Sporting Kansas City’s Melia, and the Crew’s Zack Steffen.

It may take a headline-grabbing trade similar to Nagbe’s for clubs to start to get a sense of how much their goalkeeper is worth. If history is any indication, Robles’s recent appointment as the Red Bulls’ captain would set him in pole position to be the team’s third captain traded in as many years. Whether it’s Robles or another, the first top-end goalkeeper traded within the league could be the center of a watershed moment for the position.