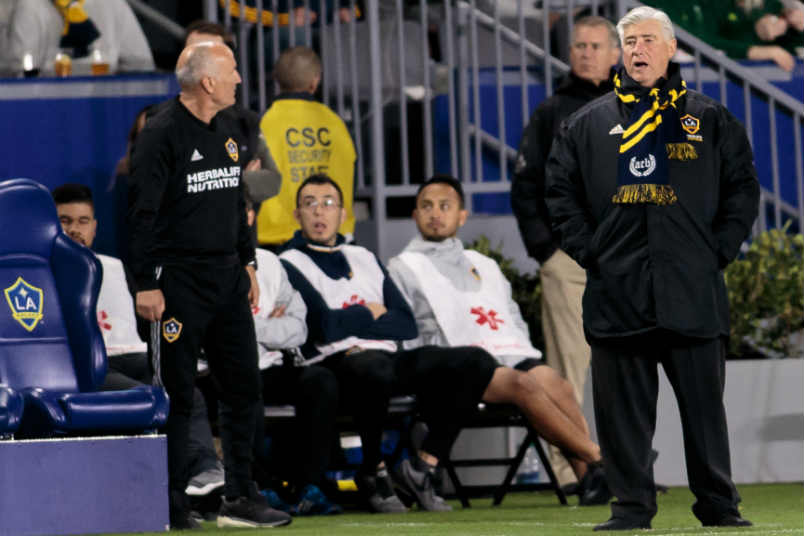 By Luis Bueno – RIVERSIDE, CA (Mar 21, 2018) US Soccer Players – The LA Galaxy underwent an offseason of change and transformation, making moves that promised a return to playoff contention and grandeur in MLS. The front office rebuilt the backline and goalkeeper positions, beefed up the midfield, and transformed the attack. With a core of high-salaried players to build on, positivity was a part of the team once more. It took two games for all of that to fall apart.

The Galaxy seemed to scrape the bottom of the talent barrel a year ago as the club banked on its youth system to populate the roster. Those attempts did not work. Now, the Galaxy have to avoid drawing several unfortunate parallels to last season.

While last year’s misguided steps were in part due to the front office unintentionally sabotaging the roster, injuries are testing the club’s depth early in the 2018 MLS season. The Galaxy may not be able to recover.

Falling in a deep hole in what promises to be a highly-competitive Western Conference may sink the Galaxy before the season can even get underway. For Saturday’s match at Vancouver, the Galaxy will be missing all three of its Designated Players as well as key players in the midfield and defense. Ashley Cole’s absence is due to suspension, but the rest are injuries once again hampering the club. That will linger for the short term if not the long haul.

What is odd is that four players are out due to the same type of injury. Romain Alessandrini, Giovani Dos Santos, Jonathan Dos Santos, and Joao Pedro are all out due to hamstring injuries. It’s the type of injury that can hamper players from quickly returning to action. While Cole will be available for the club’s March 31 fixture against LAFC, the rest may not be healthy enough for the first-ever meeting between the two LA clubs.

Not having such key players around will certainly hurt the team’s development as a unit. The club’s Designated Players are certainly important and need to be around to help establish the system that coach Sigi Schmid is trying to instill. Incoming talent needs to learn that system and contribute. The club will be missing Ola Kamara to international duty and Perry Kitchen to a knee ligament issue for the Vancouver match.

Suddenly, some of the same issues from a year ago have surfaced. Kamara has a goal in two games and gives the team hope that they won’t repeat last year’s disaster at forward. Depth is once again an issue without Kamara. The team did not do much to address the depth at the forward position beyond him. Without Dos Santos and Bradford Jamieson (concussion), the club will likely turn to Ariel Lassiter, who survived the offseason roster purge, and newcomer Chris Pontius. Even with Kamara, the club needs someone else at the forward position to help fill the nets.

The defense is also in a flux. Daniel Steres was initially on the outs of the starting lineup as the new-look backline of Rolf Feltscher, Michael Ciani, Jorgen Skjelvik, and Cole promised to help rebuild the club’s defense. Instead, the club turned to Steres at NYCFC when Ciani left due to injury at halftime. Dave Romney also saw some minutes in that match and both will likely return to the starting lineup.

The Galaxy began the season with promise. A 2-1 home win over Portland equaled one-third of the club’s win total over its 2017 home schedule. The foundation for a strong 2018 was seemingly in place. Now, the club is missing eight players from that starting lineup.

To get through this stretch, the club will need players like Ema Boateng and Baggio Husidic to come up strong which, of course, mirrors much of 2017. Constructing a roster is certainly difficult. Injuries are always the great unknown. The Galaxy seems to have poor luck with both. Somehow the team must recover and push through.

The Galaxy cannot afford to fall far behind in the table this season. The team must start off strong, not only to keep pace with Western clubs like Sporting KC and Vancouver but to regain some confidence in itself and its coaching staff. The club also cannot afford to lose to LAFC in the first-ever meeting. We all know LA likes winners, and the Galaxy can’t afford to be the market’s other MLS team.

This is an early season test of the coaching staff and the offseason work. The Galaxy always stresses success, not a problem when they were winning. That mindset is still there even though the results do not come close to backing it up. This inevitably falls on the coach, injured players or not. It’s not going to be any easier for the Galaxy this season.