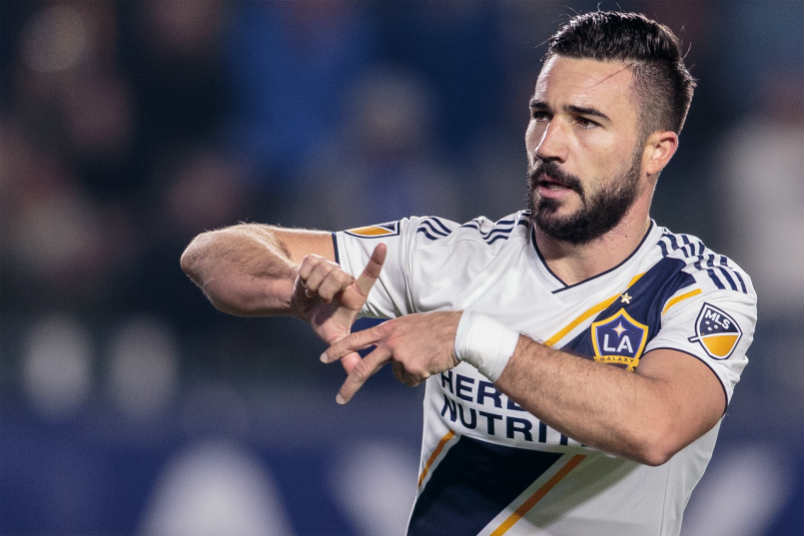 By Luis Bueno – RIVERSIDE, CA (Mar 7, 2018) US Soccer Players – Los Angeles is atop MLS once more. The city was a dominant force in MLS’s opening weekend, and it’s already clear that LA will remain there for all of 2018.

LAFC opened its existence with a thrilling 1-0 win at Seattle while the LA Galaxy took care of Portland by 2-1 at StubHub Center later in the day. Two matches and two wins for LA’s MLS clubs means a great sense of hope and optimism in Southern California.

First impressions can be tricky and help form unrealistic expectations. The first impressions each of the LA teams left were certainly positive. Dig a bit deeper, and there is room for concern with both of them

FLEDGLING CLUB GETS A WIN

With great fanfare and excitement, LAFC finally took the field in an official match and took its first steps. The fledgling club had generated quite a bit of excitement without even playing a game. That started with the stars that joined the ownership group. Some of those stars, including actor Will Ferrell and sports stars Nomar Garciaparra, and Mia Hamm, were in attendance at CenturyLink Field for the opener.

The careful construction of a roster which includes players like Mexican international Carlos Vela and MLS vets Benny Feilhaber, Marco Urena, and Laurent Ciman, raises expectations for coach Bob Bradley. Those expectations were high before the first kick of their first game.

This team could be very good. The way LAFC moved the ball was impressive. Ex-Sporting KC man Latif Blessing almost sent the expansion team into a frenzy after just 62 seconds hitting the post. Exciting youngster Diego Rossi became the first scorer in LAFC history when Vela slipped a lovely through ball to Rossi who slotted the ball into the upper corner.

Still, LAFC was perhaps a bit fortunate to leave with all three points. Seattle pressured LAFC’s backline throughout the match and were a bit unlucky not to find the back of the net. Goalkeeper Tyler Miller made a fantastic save in the first half, and Ciman made a sliding clearance to keep the ball out of the net. All told, Seattle was hard done by poor marksmanship as well as the crossbar.

The Sounders rested key players such as Clint Dempsey and Chad Marshall to prepare for its CONCACAF Champions League tilt against Chivas de Guadalajara. With a full-strength Seattle side, LAFC’s initial challenge would have been more difficult.

As with any expansion side, depth will be instrumental. Already the depth was tested as Walker Zimmerman was a late scratch due to injury. Canadian international Dejan Jankovic took his spot, but LAFC’s defense was vulnerable. How much of that was due to Zimmerman’s absence or the team’s evolution remains to be seen.

Still, LAFC’s three points were very encouraging. That starts building the confidence this team will need.

REBUILDING ON ITS WAY

A bit down the 405, the Galaxy took on another Cascadia rival as Portland came for a visit. Home was not very sweet to the Galaxy a year ago, but the club started off this year on the right foot with a victory.

The win was significant in that it helped move the Galaxy forward and gave hope that this year will not be a repeat of last season. With the victory, the Galaxy has already reached one-third of its home victory totals from 2017. Also, the one goal allowed would have been a welcomed statistic as well. The Galaxy had five shutouts and allowed one goal in three other matches. In the remaining nine home games, the Galaxy allowed two or more goals. Last year’s team may not have been able to maintain the 2-0 edge the team took into the half against Portland.

The win was also significant because a goal came from a forward. Ola Kamara scored on his debut and already has accounted for half of what last year’s top striker Gyasi Zardes contributed in 2017. Kamara did not just get the goal into the back of the net, but he fought hard and stayed with plays. The Galaxy’s second goal, scored by last year’s top scorer Romain Alessandrini, would not have happened had Kamara not continued to fight for the ball in a scramble in front of goal.

Still, there were troubling signs as well. Giovani Dos Santos, who needs to produce to earn his salary, was off by the 72nd minute. Galaxy coach Sigi Schmid said that Dos Santos had “put in a lot of miles” and thus wanted him off. Dos Santos forced Portland’s Jake Gleeson to make a diving save early in the first half and sailed an 18-yard shot high over the crossbar early in the second half but aside from that was not very active on the attack. The Galaxy cannot be a title contender with a mediocre Dos Santos guiding the way.

The Galaxy earned this win though by fighting for 90-plus minutes. While the defense was sloppy and the finishing nowhere near where it needs to be, the team showed heart and continued to fight. That will provide a solid foundation for the club going forward.

Perhaps the best first impression left by the opening weekend is that soccer in Los Angeles is now back to being fun. Chivas USA made things interesting during its decade of existence, particularly when the club was a playoff contender. LAFC though will keep things interesting no matter what. With personas like Ferrell’s and fellow owner Magic Johnson, the team will be much more in the limelight than Chivas USA ever was. If the team is good from the start, that will only ramp up the excitement.

Having two teams means twice the number of matches and twice the amount of soccer local fans receive. It will force area soccer fans to take sides instead of defaulting to the Galaxy, an option that is not enticing to many.

LA is indeed the heart and soul of MLS once more. Sure, New York has two teams, but LA has always done and will continue to do it better.