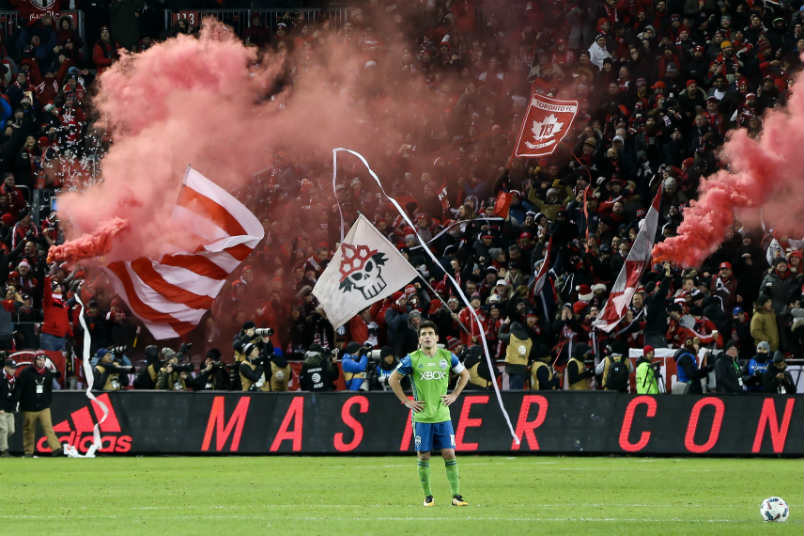 By Jeff Rueter – SAINT PAUL, MN (Mar 1, 2018) US Soccer Players – Another March, another new MLS campaign. We’ve all read about the new players, new coaches, bounceback candidates, and impending busts. Now the players get their chance to make us look bad. In the first week of each month, I’ll try to make sense of where the teams stand in a tiered power ranking. From contenders to pretenders, here’s how the league is lined up at the starting line:

1. Toronto FC: By virtue of winning MLS Cup, the Reds get the top spot going into 2018. After a savvy offseason, where all of the team’s key players remained while upgrading areas of weakness, it’s hard to deny that they’re the favorites to repeat.

2. NYCFC: After being snakebit in consecutive postseason appearances, Patrick Vieira will hope to rally around an improved back four. If David Villa starts to show his age, however, this lofty rank will become tenuous.

3. Seattle Sounders: Yes, the loss of Jordan Morris stings. However, the Sounders have continually struggled to find a way to incorporate Morris, fellow US international Clint Dempsey, and Uruguayan maestro Nicolás Lodeiro. Players like Harry Shipp, Victor Rodríguez, and Will Bruin are capable of picking up the slack.

4. New York Red Bulls: For the second straight year, the narrative around Jesse Marsch’s men is how they’ll replace a midfield captain. Unlike Dax McCarty, there’s no clear replacement for Sacha Kljestan. And yet, the drawn-out capture of Kaku adds a spark to the Red Bulls’ attack that’s been sorely missing. If Tyler Adams can continue his development and Derrick Etienne can break out, there’ll be a real dogfight for custody over New York.

5. Portland Timbers: No team went through a more dramatic facelift than the Timbers, seeing longtime figures Caleb Porter and Darlington Nagbe both depart. The Rose City shouldn’t worry about a thorny season. Giovanni Savarese finally gets his shot at MLS, and couldn’t ask for more talent on his roster. The only question is whether or not its defense can keep them in games.

6. Atlanta United FC: It isn’t as seismic as Morris’ season-long absence, but losing Ezequiel Barco for the entirety of March (and possibly beyond) will greatly stunt Atlanta’s ability to gel. It may be a rocky first month, but Julian Gressel or Nagbe can naturally fill Barco’s role in the short-term. However, the loss of Carlos Carmona leaves a major lack of midfield grit and defensive savvy, which could be a massive liability.

7. Columbus Crew: There’s been an awful lot of change for the Crew in the past eight months, seeing key attackers like Ethan Finlay, Ola Kamara, and Justin Meram bolt. The club struck gold in Jose Artur’s loan stint and is incredibly fortunate to have him on a permanent basis. Pedro Santos will need to find his consistency, but a swell of off the field narrative will either bring Columbus great success or drown it in adversity.

8. Sporting Kansas City: Bringing in Johnny Russell to start opposite Gerso is a great pickup for a team that sorely lacked goal scoring threats in 2017. Still, there are real questions to be raised about if Diego Rubio can fill Dom Dwyer’s boots. The league’s best defense remains intact, though center back depth may be a concern without Kevin Ellis and Erik Palmer-Brown.

9. Orlando City: Jason Kreis may find himself on a hot seat to begin the season, as the fourth-year franchise sorely needs to make the postseason. It explains the major facelift, with Kljestan capable of pulling the strings. New signing Lamine Sane joins up with Jonathan Spector to comprise the East’s new best center back pairing.

10. Chicago Fire: All of the key pieces remain for Chicago to prove its postseason berth wasn’t a one-off. The Fire left the draft with two players, Jon Bakero and Mo Adams, who could easily make the bench from week one. However, trading Matt Lampson on draft day without a ready replacement may cause them to lose crucial points in the first month.

11. LA Galaxy: I’ll admit, this still feels too low for the Galaxy, but the law of averages has to factor in after disastrous 2017 campaign. No team played the non-DP market better than the Galaxy. David Bingham, Perry Kitchen, and Kamara are all massive upgrades for Sigi Schmid’s side and bring vital MLS experience to the core.

13. FC Dallas: Kellyn Acosta may be hurt, but there’s no better midfielder on MLS benches than Victor Ulloa. The longtime starter regains a spot in the lineup for a team that sorely needs to build some positive momentum early after a historic collapse last fall. If Cristian Colman can bounce back strong and Santiago Mosquera shows few growing pains, Dallas could be Shield contenders once again.

14. Houston Dynamo: One of the league’s most pleasant surprises in 2017, Wilmer Cabrera will now face off against opponents with a better book on the Dynamo. Cubo Torres’s absence hurts a bit. A veteran (see: aging) backline could suffer a swoon without immediate spells.

15. Montreal Impact: New boss Remi Garde will get his first taste of MLS with one of the league’s best attackers at his disposal. Ignacio Piatti should eagerly welcome Jeisson Vargas’ arrival, helping relieve pressure. If a retooled back-four can gel quickly, Montreal could sneak back into the playoff hunt.

From this point on, we could rank the remaining eight teams by a series of coin tosses. None really have a defining factor to set them apart from the pack. Which is to say: assume one of these teams will make me look bad and win the Supporters’ Shield.

16. Vancouver Whitecaps: Third in Canada, third in Cascadia. No matter how much positive momentum the Caps seem to build, a young player will struggle for time. Darren Mattocks, Kekuta Manneh, meet your new peer: Tim Parker.

17. DC United: These guys have been moving and shaking since August, with a mixed bag of results. Russell Canouse and Paul Arriola are good foundational dudes who don’t take international spots. Mattocks costs a pretty penny, doesn’t have a clear position, and doesn’t seem to be a starter for this side. Frederic Brillant and David Ousted were necessary fliers to shore up the defense. The big question is Yamil Asad. Can he reach the same lofty heights from Atlanta, or was he a beneficiary of Tata Martino’s High Flying Birds?

18. San Jose Earthquakes: I don’t quite get the narrative that this team has seen massive improvement. The Quakes squeaked into the postseason in spite of the league’s fourth-worst goal differential and lost 5-0 in the playoffs. Tack on a new coach and a large financial investment in Scandinavian talent, and there are more questions than answered in San Jose.

19. Philadelphia Union: Spare a thought for Andre Blake. The newly-anointed Best Goalkeeper in MLS will earn his check every week with a questionable team in front of him. Jim Curtin’s seat may be the hottest in the league, and yet another rebuild seems likely in Philadelphia.

20. LAFC: I look forward to your Twitter mentions. This team is top-heavy and incredibly thin, and I have serious reservations about the team’s midfield. Eduard Atuesta may be part of the answer, but Benny Feilhaber seems best poised as a playmaker than a true box-to-box guy in this system. Bob Bradley isn’t a loser, though, so I imagine the team will climb soon.

21. Minnesota United FC: A lot of this ranking rides on the assumption that Adrian Heath plays his best lineup sooner than later. If the preseason is any indication, that might not be the case right away. Minnesota saw two players rise from the NASL ranks into bona fide MLS starters, and both Brent Kallman and Christian Ramirez seem poised to start the season on the bench. If the attack can link up with the midfield, the Loons may be set to win high-scoring affairs.

22. Colorado Rapids: There’s talent that new boss Anthony Hudson can use. I just worry about the team’s ability to find game-breaking talent. Shkelzen Gashi looked like one of the league’s most overpaid player in 2017 and is failing to live up to his price tag. It’s still a question of who can score goals While Dominique Badji has been a bright spot, the Rapids replaced one former Wolverhampton striker, Kevin Doyle, with another, Joe Mason.

23. New England Revolution: Someone has to finish last, and the pieces are there to justify New England starting in the basement. A new, unproven coach. Trading the team’s main striker. A questionable backline. A disgruntled playmaking star. New England could surprise, and there are few people in the game who are as smart as Brad Friedel. The jury’s out if there’s a good team in Foxboro, though.