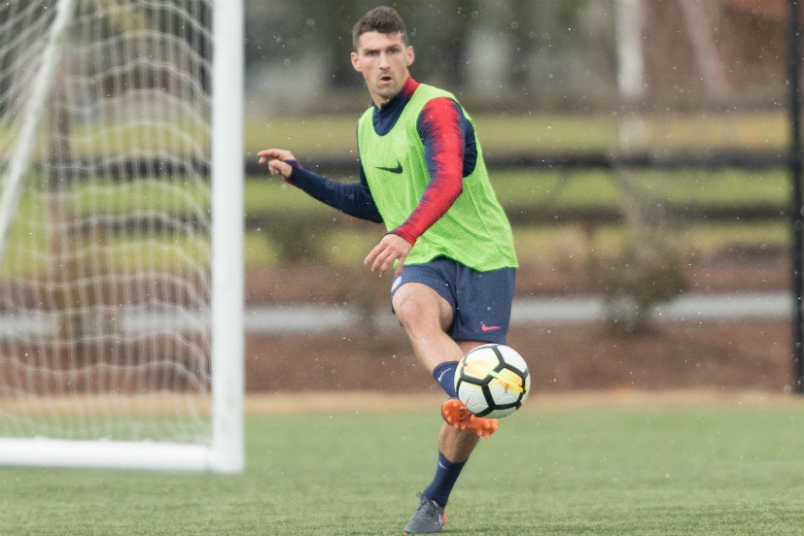 By Clemente Lisi – NEW YORK, NY (Mar 26, 2018) US Soccer Players – When it comes to pro team sports, North Carolina is known for the NFL’s Carolina Panthers, NBA’s Charlotte Hornets, and the NHL’s Carolina Hurricanes. Then there’s college basketball, the hallmark of the state going back decades.

Many people are working to add the world’s game to the rich tapestry of sports North Carolina is already known for. The state wasn’t a part of the original NASL of the 1970s and early ‘80s, but the Carolina Lightnin based in Charlotte and coached by Rodney Marsh won the ASL title in their debut season in 1981. The state has turned into fertile ground for high school and college players. Capital Area Soccer League in Raleigh, for example, was founded in 1974 and has become one of the largest youth soccer clubs in the nation. It currently features over 700 teams. The league was recently rebranded North Carolina FC Youth.

The state has been a catalyst for youth development for years. The University of North Carolina at Chapel Hill men’s team has achieved a high level of success over the years, including former USMNT defenders Eddie Pope and Gregg Berhalter. Other soccer bluebloods like Wake Forest and Duke also have strong collegiate traditions, competing for the NCAA title each year and sending dozens of players into the MLS SuperDraft.

However, it’s North Carolina’s women’s team that’s turned into legend. Under coach Anson Dorrance, they’ve won 22 of the 36 NCAA championships contested. Mia Hamm, one of the greatest players in women’s soccer history, played there in the early 1990s. UNC also produced other standouts such as former USWNT captain and future coach April Heinrichs and Heather O’Reilly.

Tuesday’s friendly between the USMNT and Paraguay at Sahlen’s Stadium at WakeMed Soccer Park in Cary places a spotlight on the sport in a state where fans are yearning for pro soccer. The MLS franchise sweepstakes is playing out in medium-sized markets across the country the past few years. That’s driven many USL franchises to bid for a spot in the topflight. Sahlen’s Stadium seats 10,000 and hosts both NCFC and the Courage in the NWSL. It’s the stadium that also represents an issue. Located roughly eight miles from downtown Raleigh, it’s not big enough for MLS games.

North Carolina’s quest to enter this exclusive club included separate bids from Raleigh and Charlotte. The friendly could very well serve as a rehearsal for a market where the nearest MLS team to Raleigh, for example, is DC United some 300 miles away. NCFC, owned by Stephen Malik, a tech entrepreneur, has pumped millions into his club with a plan to bring MLS to Raleigh. Whether having the National Team play nearby can prove to be a catalyst remains to be seen. Charlotte’s bid, for example, completely collapsed last October even though it was headed by Charlotte Motor Speedway CEO Marcus Smith. That came after city officials failed to reach an agreement on public-private financing of a proposed $175 million stadium. Charlotte also has a USL team, the Independence playing in a soccer complex in suburban Matthews.

Last year, North Carolina FC proposed to build a $150 million soccer-specific stadium in downtown Raleigh. Under the plan, the 22,000-seat facility would anchor a mixed-use complex featuring office and retail space as well as 1,200 residential units and 300 hotel rooms. That wasn’t enough to keep them in the running for MLS expansion.

Writing in the Raleigh News and Observer last November 29, sports columnist Luke Decock observed: “Raleigh will need to finalize its stadium plan and rely on its 14,000-strong youth program to demonstrate community support. And there are still seven other bids out there lurking, although several – including Charlotte, Indianapolis and St. Louis – appear dead in the water.”

Despite its involvement in youth soccer all the way up to the USL level, NCFC has had attendance issues. Last season, the team averaged just 4,500 during its 15 home games. As a result, local supporter groups like the Oak City Supporters are trying to generate interest and grow the fan base.

“Supporters’ culture is a bizarre and ridiculous thing, but one that really can benefit every aspect of the club,” said Ryan Jernigan, who founded the Oak City Supporters four years ago. “I see it as the party that draws people to the game. You want people to feel a sense of pride in your city, team, badge, home stadium… and it’s the supporter’s job to try and make that happen. You want players that play for you to also feel that pride also and the opposing team to hate every second of it. It’s something unique to this sport and brings so many people from different walks of life together.”

The USMNT vs Paraguay marks a real opportunity for Raleigh to show that there is genuine support for the game at the highest level in a state that has embraced local teams in other pro sports in recent decades.

“I don’t think an NBA, NFL, or MLB team would work here (in Raleigh) because of the massive college dynamic in the area. UNC and Duke have bigger brands than some NBA teams and the Durham Bulls are the biggest minor-league baseball team in the country. It does benefit hockey and soccer,” Jernigan said. “Just like the Hurricanes showed in their 2006 Stanley Cup run, people in the area want to support professional sports in this area regardless of if it’s a ‘traditional’ one.”

“When you look at the MLS expansion process, I don’t think many people really rated Nashville as a frontrunner until they hosted a USMNT game,” said Jernigan, referring to the USMNT’s Gold Cup match against Panama that drew nearly 48,000 fans at Nissan Stadium last summer. “All of a sudden, they surged to the top of the list and went from not having a club at all to being awarded an MLS franchise. I’m not 100% sure that’s actually why things shook out the way they did, but from an outside perspective it sure seemed that way.”

Some argue that a meaningless friendly creates less-than-ideal conditions to showcase the state’s passion for the world’s game.

“But with MLS hopes for NCFC still up in the air, I wish we were getting the chance to put our best foot forward in a competitive match at Carter Finley Stadium with 57,000 screaming fans under the lights instead of an unglamorous friendly in a smaller venue,” wrote Zach Hicks on the Soccer ‘n’ Sweet Tea blog. “I believe in the soccer culture of the Triangle, it’s great to see the USMNT coming to the state, and you already know ‘I believe that we will win.’ I hope and expect that our fans will do the nation and our local club proud. I just wish we had the chance to show more on a bigger stage.”

The upcoming US friendly is about changing perceptions. Soccer in North Carolina may someday get that bigger stage. For now, it will have to be satisfied with hosting a USMNT that’s in the process of rebuilding.

“We’ve hosted the USWNT multiple times always with a great turnout. Hopefully, this game just continues to get bring out people who’ve never been to an NCFC game and get them interested in what’s happening at a local level,” Jernigan said. “It’s been amazing to see the change around the sport locally and this just furthers that legitimacy.”