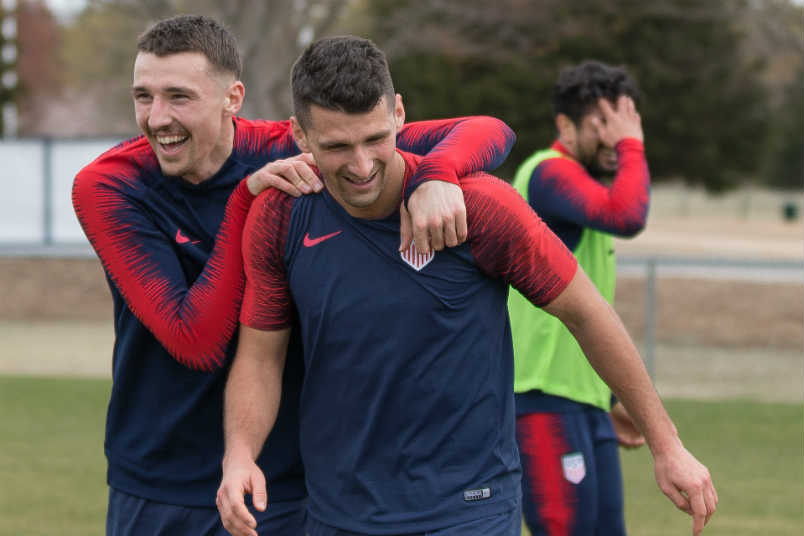 By Charles Boehm – WASHINGTON, DC (Mar 23, 2018) US Soccer Players - The USMNT still find themselves in an unusual holding pattern as they gather in North Carolina this week ahead of Tuesday’s friendly vs Paraguay (7pm ET- FS1) . Amid all the sound and fury that’s been raging across American soccer the past few months, however, a return to match action should be a welcome development for all of us.

Two months on from their last camp, the US Soccer Federation has a new president. The March FIFA international window makes the full player pool available. The group of 23 who reported to the WakeMed Soccer Park this week includes plenty of fresh faces. Five of them are taking part in their first USMNT call-ups, and 17 are age 24 or under.

Yet they arrive at the same stopgap setup in place since last fall. The Federation is taking its sweet time in filling the new general manager post created to oversee the next head coach, along the way earning some unflattering headlines about both the process and the framework of the job.

Interim coach Dave Sarachan and his staff have been manning the ship since Bruce Arena’s departure. Sarachan recently had his contract extended through the World Cup, suggesting that US Soccer is waiting to see who is available after Russia 2018. Sarachan is making his case to the media for a chance to stick around after the new hire arrives, whenever that may be. For now, it looks like something of a long shot, though. Above all, the hard fact remains that the USMNT won’t play a formal competitive match until next year.

So this month’s game, as well as the upcoming summer friendlies in Europe, carry little more than the inherent value they possess as National Team events. These are on-the-record auditions, both in training and match play, that we assume the future new boss will factor into evaluating the player pool to at least some extent. There’s also the very real importance of representing the country, and offering a still-frustrated fanbase something to feel good about.

“With the calendar being what it is in 2018, there’s no replacing minutes that you can get with the national team in friendlies,” Sarachan said in a ussoccer.com Q&A. “The more times you can offer those opportunities to players that need those minutes, the better. Those players being a part of this roster represents a couple things. First, getting to know them, seeing them first hand in training and giving them a real taste of being part of the national team from a day-to-day training perspective. Also, we hope there in an opportunity to get them minutes in the match that will help them further down the road.”

Sarachan has blended overseas-based Yanks, many of them intriguing newcomers, with those who showed well in January camp, and sprinkled a few veterans in for seasoning. If he can settle on the right mix for his starting 11, Tuesday could be a very interesting occasion against quality opposition.

Tim Weah, the 18-year-old son of the legendary George Weah and a hot prospect at mighty Paris Saint-Germain, has drawn much of the attention, for obvious reasons. The USMNT U-17s star can choose from three nations he’s eligible to represent. In the wake of Jonathan Gonzalez’s switch to Mexico, it’s encouraging that he keeps taking US call-ups.

“I’m enjoying the time that I’ve been given, and I’m just here to gain experience and work towards the future and hopefully become a star for this team and for PSG,” Weah told reporters on Wednesday.

This camp’s other new names - Shaq Moore, Andrija Novakovich, Erik Palmer-Brown and Antonee Robinson – all carry interesting backstories and promising seasons in Europe. Having carved out meaningful minutes and solid displays in competitive leagues lately, all appear to be in the mix for playing time on Tuesday. Should their training-ground performances justify it, handing any of them debuts would send an important message that quality trumps seniority or reputation at this time of renewal.

Late addition Kekuta Manneh is another one to watch. The Gambian-born winger technically isn’t a newbie, having taken part in last year’s January camp. This time around he’s finally cleared for match action, though, having completed both his path to US citizenship and his FIFA eligibility switch. “Cinderella story” is a badly-overused phrase, but Manneh’s rise fully deserves the tag.

Most importantly for Sarachan and the US, the jet-heeled attacker brings a skillset of speed, trickery, and creativity that is traditionally uncommon in the US. So does Kenny Saief, another dynamic wide player who didn't get the full Gold Cup experience last summer due to injury.

I’ll also be watching central midfield closely. Sarachan has a range of promising personnel and formation options for the engine room. Tyler Adams and Weston McKennie showed well in the November friendly vs Portugal and looked like a powerful combo for the future. Cristian Roldan and Marky Delgado have been two of the top US center mids in MLS for the past two years or so, and deserve a look, too. Wil Trapp brings a cerebral, craftsmanlike approach to the #6 position, something Sarachan has said. Darlington Nagbe is the most experienced of the bunch and can fill both a leading or complementary role.

Will he pack as many of them in as possible via a 4-4-2 diamond? Or will a trio be better for supporting an attacking trident up top? Hopefully, the coaching staff will make the most of this chance to experiment against a strong opponent. After Tuesday, we’re all going to have to go back into USMNT hibernation until the summer, watching and waiting for new leaders and green shoots of spring.