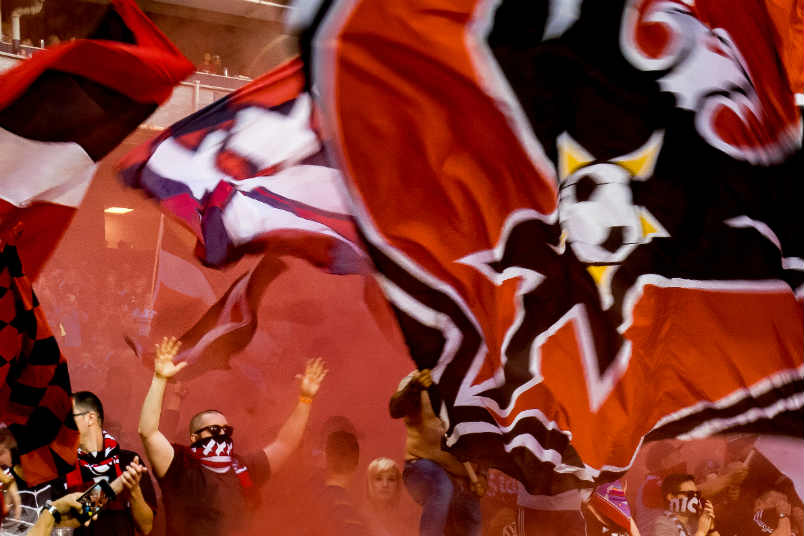 By Charles Boehm – WASHINGTON, DC (Mar 2, 2018) US Soccer Players – DC United’s 2018 MLS season is about building. One of the league’s founding clubs, United have influenced MLS mightily over the decades, winning a roomful of trophies and setting its first standard for “supporter culture.” While the suburban minivan demographic held sway in most MLS venues in the early years, DC’s passionate, colorful supporters’ groups like the Barra Brava and Screaming Eagles made games at RFK Stadium something special.

Now, finally, after more than a decade of fruitless searching, they’re getting a soccer-first stadium of their own this year. In July, Audi Field will open on the capital city’s Anacostia riverfront, providing a compact, intimate theater for United games in the heart of the city.

Some changes were inevitable. Both on-the-ground realities and history in other MLS markets had made that clear. At RFK, organized support had seats in a prime far sideline location. That won’t be happening at Audi Field. Instead, the supporters will be in the north end, a section originally promised as a “safe standing” area, with no seats to provide more space and density for the dedicated faithful who stand, sing and chant all game. United switched it to bleacher seats for unclear reasons late in the process. Ticket prices would increase across the board, with new amenities, a lower overall venue capacity, construction bonds to pay down, and a more lucrative supply/demand equation for the club.

It’s a tradeoff for leaving RFK. Nostalgia for that decaying old bowl is much easier to cultivate from a distance. With a vibrant home-field advantage and revitalized revenue streams, the new, $300-million-plus house seemed capable of catapulting the Black-and-Red from the league’s lower-middle class back into its elite. The anticipation grew more palpable with each passing month.

Then DC United sent out an welcome Valentine. On February 14, the excitement for 2018 noticeably ebbed for some of the club’s staunchest supporters.

DC United announced a “strategic partnership” between the club and the Screaming Eagles. That single supporters group would now “take the lead role to manage all aspects of the supporter culture including single-game supporter tickets sales for both home and road matches as well as organizing all activities and in-game fan experiences in the north end zone” at Audi Field.

The announcement also included news of a laudable partnership with soccer-based youth development organization DC SCORES and a cute-sounding “DC United Supporter Development Academy” initiative to instruct young fans-to-be in the “customs and traditions of DC United supporter culture.” But the unilateral decision to pick just one of the three supporters groups for an official, and plainly preferential, status sparked anger and disgust among some of United’s hardcore fans.

Not only among the Barra Brava and District Ultras groups not mentioned in the release, but also among some rank-and-file Screaming Eagles members, some of whom claimed to have gotten no advanced notice or even hints from their leadership.

More impactfully, by granting the Screaming Eagles exclusive access to single-game ticket sales, United’s decision routed one of the supporters’ groups’ main revenue sources into their sole control, at the direct expense of the other two. Traditionally, supporters groups in DC and elsewhere across North America buy ticket blocks from their respective clubs, then take a small cut of the secondhand sales to help cover their often-substantial expenses on tifo, travel, tailgates, and the like.

United had maintained for months that the only way to sit in the supporters section was to buy a season ticket. That threatened to price the experience out of the range of many hardcore supporters. The decision to allow single-game sales would have a been a welcome concession had it involved all of the supporters groups.

United officials emphasized that they wanted to maintain and enhance the supporters groups contributions to matchday atmosphere and continue long traditions. They also stressed that they didn’t see any of these as great changes. United emphasized the Screaming Eagles’ nonprofit status, which may have been an oblique way of referring to ticket-sales problems in the past. The District Ultras also holds 503(c)4 status, while Barra Brava does not. It’s certainly possible that a new stadium will lead to new groups forming in the months and years ahead.

United’s executives have yet to discuss the matter since the announcement. The imbroglio in the nation’s capital underlines the awkward state of affairs between teams and supporters’ groups across MLS and North American soccer as a whole.

Teams, leagues and yes, even federations love the passionate support – both audible and financial – that SGs provide, and the lively environments they lead the way in creating. Executives know how vital it can be in differentiating their product on an intensively competitive sports business landscape. They know it helps their team on the field, and in the bank accounts. That’s why some of them bend over backward to keep SGs on board, or even endeavor to “astroturf” such fandom by cultivating it themselves where it doesn’t grow on its own.

At its heart, authentic supporter culture is almost always unruly, uncouth on some level, and reflexively defiant towards authority. To allow that into their heavily secured and increasingly luxurious modern facilities creates a question of control that is becoming increasingly difficult in many places. When key decision-makers are less “soccer people” and more “businesspersons,” or even perceived to be such, things can turn ugly in a hurry.

Nobody involved in MLS should play down the role of the supporters groups at any point in league history. Those who watch MLS games on television respond to the fervent, organized displays of devotion on offer in places like Children’s Mercy Park, home of Sporting Kansas City, and Portland’s Providence Park. What they are much less likely to see is the years of painstaking volunteer work and community-building that goes into building and sustaining such rites. Nor how quickly it can all crumble.

New franchises like Atlanta United may be charting something of a third way with closer, more official relationships between the front office and SGs, even if it smacks of corporate plasticity to those coming from rootsier perspectives. The ongoing fuss in DC is a striking reminder that even flagships can take on water.