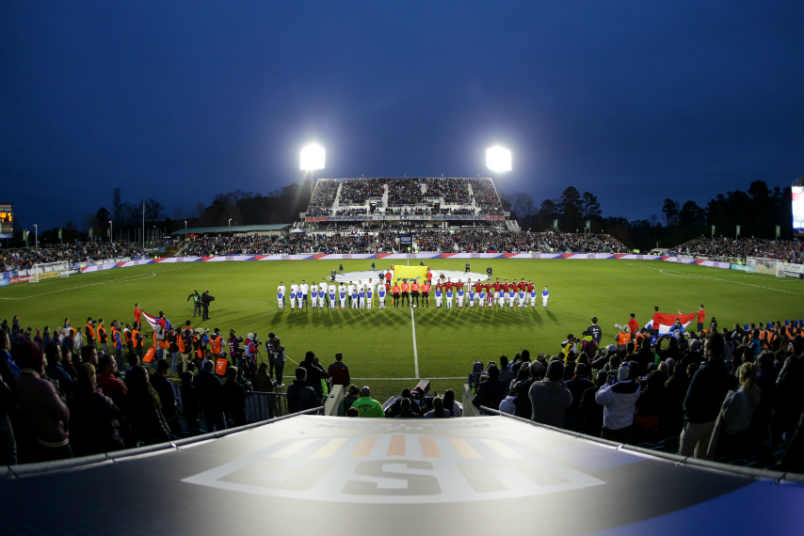 By Charles Boehm – WASHINGTON, DC (Mar 29, 2018) US Soccer Players - The USMNT produced both a solid performance and a positive result against Paraguay in North Carolina on Tuesday. Though the night wasn’t perfect, that’s worth cheering, especially given the recent tendency for some observers to view everything around the program in a negative light. Here are a few of my observations of the good, the bad, and the ugly from the first US victory of 2018.

Calmness and control in the center of the park

Possession, rhythm, and control in midfield have been recurring USMNT issues for many years, particularly in big moments against high-caliber opposition. So it was encouraging to see the young central-mid trio of Tyler Adams, Marky Delgado, and Wil Trapp more or less own the engine room. All three covered ground intelligently, disrupting Paraguay’s build-ups and starting plenty of their own, including the Delgado-to-Adams combination that earned the game-winning penalty kick.

You could make the case that Paraguay is comfortable conceding possession in less dangerous areas to break out on the counterattack. That danger was also fairly well managed on Tuesday.

In general, this group showed a good level of fluidity, purpose and ambition as a collective, considering their youth and limited time together. That bodes well.

Flashes of skill and verve

Creativity and flair is another oft-critiqued area for the USMNT. So let's highlight when players show skill, technique, and imagination. Tuesday’s standouts were Darlington Nagbe and Kenny Saief in the flank midfield spots of Dave Sarachan’s 4-1-4-1 formation.

Like January’s friendly draw with Bosnia & Herzegovina, the USMNT coach did not include a true #10 in his starting 11. That put the onus on the wide men to inspire the attack. The relative shortage of clear-cut scoring chances (the USMNT took six shots, just three of them on target) was not ideal. Yet there were stretches of flowing, enterprising play. Nagbe and Saief were at the center of much of it.

Nagbe, as is his tendency, settled into more of a facilitating role, completing 35 of his 39 passes and circulating the ball from side to side in the buildup. Saief was more aggressive out on the left, delivering four balls into the penalty box in addition to taking several corner kicks. Both contributed some enjoyable moments of skill and technique to add a welcome entertainment factor to the evening.

Let’s be honest, it can be difficult for anyone to summon maximum intensity levels for games like Tuesday’s. As it turned out, that wasn’t a problem in Cary.

Maybe it was the hunger to make an impression on the coaching staff or just a combustible mix of personalities. Whatever the reason, tempers flared as hard Paraguayan challenges started flying in after halftime, and several confrontations threatened to boil over. It gave referee Kimbell Ward of St Kitts & Nevis as much as he could handle in what Sarachan later called “a big-boy game.”

The young US squad reacted well to that unexpected hard edge, standing their ground and doing what was necessary to hold their lead without losing their composure. Considering how many players came in with relatively little experience in USMNT colors, they represented the badge, and themselves, with pride.

Lack of ideas near goal

For all the USMNT's quality on the ball in midfield, it was a different story in the attacking third. Once they got closer to goal, the Yanks struggled to carve open La Albirroja’s back line with the same regularity. That made it hard to find the second and game-clinching goal that would have been a just reward for a strong first-half, leading to some nervy moments late on.

Paraguay is a rugged defensive outfit and they seemed more comfortable in a deep block. Should Sarachan have featured a true #10 in his lineup, or adapted to the circumstances by bringing one off the bench, or perhaps by shifting Saief or Nagbe centrally? It's certainly worth asking.

Possession is of little use if not translated into attacking danger, of course. I’m inclined to go easy on Sarachan and his team in this particular area, though. Without the midfield dominance to set the stage, this wouldn’t be nearly as much of a conversation topic.

Bumps out of the back

Playing out of the back can be a high-risk, high-reward proposition. A shared slip-up in this department by Zack Steffen and Matt Miazga nearly gifted Miguel Almiron an equalizer in the 67th minute. Trapp did well to track back and block the danger.

These moments are forgivable for a young group, though. Previous USMNT coaches haven’t shown much of a desire to even attempt playing out of the back, and there are usually bumps early in the process.

Baffling. Infuriating. Ridiculous. Cynical. Those were just a few of the reactions to the coach’s substitution pattern. After promising pregame to max out the six changes available to him, Sarachan didn't make a swap until the 67th minute and then brought only four players off the bench, two of them in the game's final five minutes.

“You don’t just make changes for changes sake,” Sarachan told reporters afterwards. “We did want to make [more than] three or four subs, but the game sort of evolved in a way that we felt the players on the field needed to be rewarded for a great effort.”

It’s easy to lose sight of the reality that the program’s culture and team dynamics push the coaching staff towards a merit-based mindset. Playing time should link to performance, period. That said, Sarachan’s disinclination or disorganization regarding subs was a badly missed opportunity. It would’ve been easy to max out the changes, and it would’ve inspired players and fans alike.

Could he really have been prioritizing the final result over the process of blooding new and rising talent? Regardless of his reasoning, Sarachan’s management on that front raised unnecessary questions.