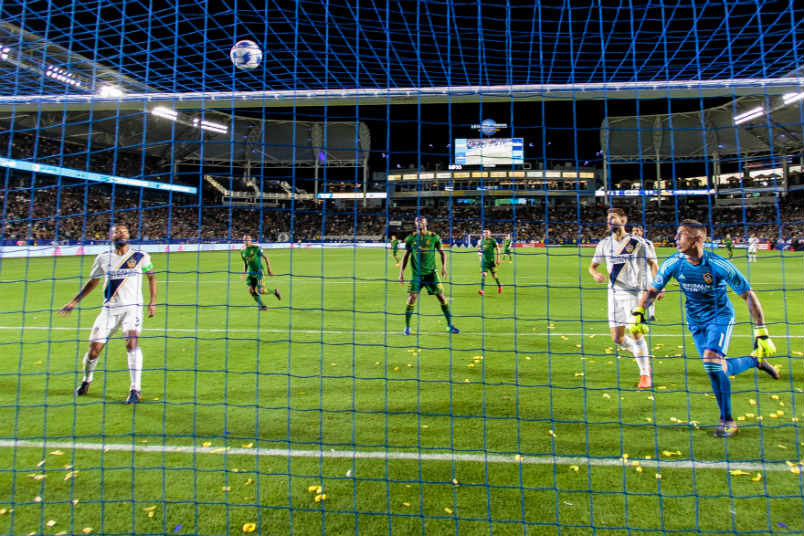 By Luis Bueno – RIVERSIDE, CA (Mar 28, 2018) US Soccer Players – The LA Galaxy have long been pursuing Zlatan Ibrahimovic, and now that the club finally landed him the team is trying to get him in the lineup as soon as possible. Ibrahimovic could conceivably arrive in Los Angeles one day and then play in a league game the next. The Galaxy want to ramp up the speculation, excitement and curiosity surrounding Ibrahimovic’s arrival and make Saturday’s game a bit of an afterthought.

It is no coincidence that the Galaxy will host LAFC on Saturday, in what could be Ibrahimovic’s first game in MLS.

On the dawn of Los Angeles’ next great rivalry, the Galaxy is trying to capture all of the attention and share none of it with LAFC. That is what will be at stake whenever the Galaxy and LAFC face off. Attention. Notoriety. The spotlight.

Both clubs crave it, but how each side goes about trying to gain it is quite distinct. As the club’s mantra has been for years, the Galaxy is trying to play up the superstar angle. The Galaxy has had a long line of big-name players come to the club. This is just the latest. The club hopes that all the oohs and aahs at Ibrahimovic’s arrival will keep the team relevant.

LAFC meanwhile has come out and tried to make the focus on soccer and the city. The club turned to a no-nonsense coach in Bob Bradley who will run a tight and disciplined ship. The club has tried to foster love for the city of Los Angeles as a reason to support this new team. The team’s slick marketing campaigns have focused on making LA the star. By doing so, the team has an already built-in advantage over the Galaxy. LAFC will play home games in Los Angeles proper while the Galaxy have called Carson home since 2003 and play on the campus of California State University Dominguez Hills.

LAFC’s arrival is a threat to the Galaxy. The Galaxy has done everything possible to remind everyone of how long the club has been around. The Galaxy’s “Since ’96” campaign is a reference to the first year of the Galaxy’s existence. While that is something the Galaxy has over LAFC, history and tradition, it is only a part of what the teams will bring to the field on Saturday.

LAFC would like for Saturday to be the beginning of a changing of the guard, for the old regime to hand over control of the city to the new one. LAFC has come out firing on all cylinders, beating Seattle 1-0 in its first-ever match, then overwhelming Real Salt Lake 5-1 the next time out. The win at Rio Tinto Stadium was impressive and showed just how much of a force this team can be.

To be relevant in Los Angeles, LAFC must continue winning. The team will not christen Banc of California Stadium until the end of April. If the club hits a dry spell prior to playing there, the novelty will have won off a bit.

LAFC hopes that changing-of-the-guard will be a display of what the old MLS format used to look like and how ineffective it is against a fresh, new approach. LAFC has built its team in a very different manner than the Galaxy. Sure, the club has as its centerpiece attacker a Mexican international (Carlos Vela) just like the Galaxy (Giovani Dos Santos), but the similarities quickly deviate from there. A look at each team’s most recent signings reveals as much. Ibrahimovic is a 36-year-old with as big of a name as anyone playing the game now that commands attention and a high salary. LAFC landed 21-year-old Portuguese midfielder Andre Horta from Benfica as the club’s third Designated Player. The move for Horta, who is on loan with SC Braga and is likely to arrive in July, set the club back $7 million for a transfer fee.

Both teams want to win and compete for championships, but the Galaxy wants to do so with stars leading the way. With players like Landon Donovan and David Beckham casting a long shadow, the team has obligated itself to continue pursuing glory in this manner. Perhaps the club’s long-standing go-big-or-go-home mentality with regards to player acquisition is so ingrained that team officials know no other way to operate.

That Ibrahimovic is even a possibility to play against LAFC speaks to that mentality, of putting the stars in front of the team. The club played its former intracity rivals in 2007 with a similar scenario. Now, it is Ibrahimovic and LAFC. Then, it was Beckham and Chivas USA. Beckham had played for England in a friendly against Germany on a Wednesday and flew back to the United States and lined up against Chivas USA on a Thursday. Sure, the Galaxy captured attention prior to the game. The result was rather unkind. Chivas USA pulled out what would ultimately become a rare victory in the one-sided rivalry, a 3-0 triumph over the Galaxy.

Still, old habits die hard. Attention is still very much important to the Galaxy. Winning will ultimately determine which LA club will receive the bulk of it and that will start with Saturday’s first-ever meeting.

For the sake of soccer in Los Angeles, the hope is that this rivalry will be a long-standing one, with both teams showing up to the games ready to do battle, ready to put on a great spectacle. Any true rivalry needs as much.

This one figures to be different. Dominion over Los Angeles is at stake, much more than it ever was when the Galaxy and Chivas USA met up for a decade’s worth of games before.

Both teams strive for relevancy and acclaim in one of the most difficult places to gain such things. How they fare against one another in this first meeting will lay the foundation for it all. In that respect the clubs have collectively helped create that hype. Now, one team will achieve it at the other’s expense.