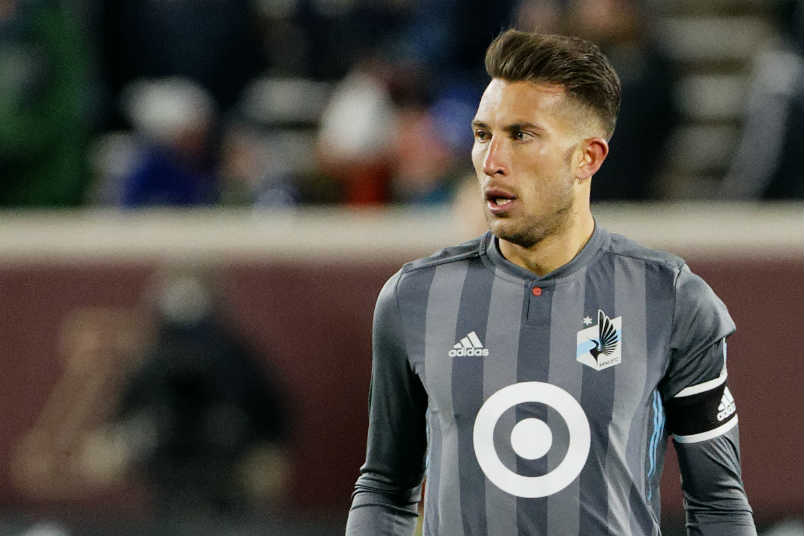 By Jason Davis – WASHINGTON DC (Apr 4, 2018) US Soccer Players – On Saturday afternoon, Minnesota United lost to Atlanta United at TCF Bank Stadium by a score of 1-0. The Loons fell to Atlanta despite playing up a man for nearly an hour after defender Leandro Gonzalez-Pirez received two yellow cards in the first half, putting the visitors as a significant deficit. Minnesota controlled the balance of the game, but couldn’t break down Atlanta’s defense. An own goal by Francisco Calvo proved to be the difference after 90 minutes.

The immediate aftermath of that less-than-impressive performance by both the team and Calvo himself seemed a strange time for the Costa Rican defender to lash out at MLS. Specifically, the league office and all of its various publicity arms for showing his team a lack of respect. Calvo actually went out of his way to make a point about the share of attention given to teams around MLS.

“I know you’re not asking me this, but I want to say this: I’m tired of how Major League Soccer gives a lot of credit to Atlanta or LAFC. Because it’s weird how Minnesota wins, and Major League Soccer [goes], ‘Eh, OK, Minnesota wins. But Atlanta wins or LAFC wins, and they make a show. I don’t know why. So I think we deserve more respect in this league, all right? I’m tired of that because I think we are, I mean, we are 23 teams in this league. So we deserve more respect in this league. That’s what I want to say.”

Putting aside the strange timing of Calvo’s comments, it’s worth considering his argument. While Minnesota United struggled in its expansion season like most first-year clubs, year two has started with some promise. The Loons scored a couple of solid victories through three matches. They already look reasonably competitive in a wide-open Western Conference. Considering that the club still has a full season at a temporary venue before moving into custom-built digs, Minnesota isn’t as poor as they could be.

Minnesota also just added Colombian attacker Darwin Quintero as the club’s first-ever Designated Player. Quintero went so far as to suggest that United could be champions in his initial comments to the local press. While that might be a far-fetched or an example of a new player wanting to make a good first impression, it does give the Loons more of an edge. Calvo’s issue with attention for Atlanta and LAFC isn’t just about those teams winning. It’s about the star power and attitude those new teams bring to MLS.

Atlanta pulled talented young South American talent with the lure of Tata Martino, a coach unlike MLS has ever seen when judged on his history with Barcelona and Argentina. Investor/operator Arthur Blank’s willingness to invest in his new project and the city of Atlanta’s incredible enthusiasm for soccer put record crowds into two different venues. Atlanta doubled down on a playoff berth in year one by breaking the MLS transfer record for Ezekiel Barco. There’s more, but that’s plenty to explain why Atlanta United gets the attention it does.

LAFC made similar waves in its own distinct way. It started with the signing of Carlos Vela and continued with the hiring of Bob Bradley. LAFC dresses all of this in the sharp, modern way they approach marketing. That also includes a shiny new state-of-the-art stadium set to open this month. LAFC’s excellent start to the season and expected rivalry with the Galaxy makes it an obvious choice for the spotlight. Not to mention that the team plays in the second largest media market in the country, home to the bulk of the country’s entertainment industry.

Of course, Calvo’s comments aren’t really about Atlanta or LAFC. It’s about the league’s approach to publicizing its teams. Is there any expectation that all of the clubs get their fair share of the corporate effort? MLS is in the business of selling itself to the American soccer public, so it’s only natural that coverage and attention would be somewhat unequal. Bigger markets and flashy names get the lion’s share, as they would in nearly any other industry.

The catch for Calvo, Minnesota United, and the rest of MLS outside of a few clubs is that other American sports and soccer abroad don’t need to worry about coverage from the league itself. MLS chose to fill a void and become its own media outlet. Calvo isn’t just complaining about a lack of attention from some diffuse media writing and discussing teams the way one might in a place like Europe or Central America. He’s complaining about outlets that have the League’s stamp of approval.

It doesn’t matter if the MLS coverage machine has clear editorial independence, or whether Calvo appreciates that fact. The complaint rings true both because it’s provable (take a look at the Twitter content pumped out by MLS over any reasonable time period) and because discerning the difference between what is an editor’s choice and what is part of the league’s coordinated push of one team over another isn’t easy.

Should MLS, whether the editorial engine or the marketing element, be in the business of treating all of its clubs equally? That would certainly answer Calvo’s criticism, though it’s nearly impossible to imagine that better teams and teams that play more attractive attacking)soccer wouldn’t deserve more attention. There’s no hard data that correlates directly to coverage. The issue facing New York-based MLS is the same one that mainstream news media, sports and otherwise, are facing in the digital age. Bubbles are a problem.

Maybe the lack of attention for his club really does upset Calvo. Or, maybe he trotted out the respect card like so many team leaders through the ages. His word followed a dispiriting loss in the front of the home fans, an event that can crush team morale if left unaddressed. Rather than focus on his own mistake and his team’s inability to find a goal or two, the captain shifted focus elsewhere.