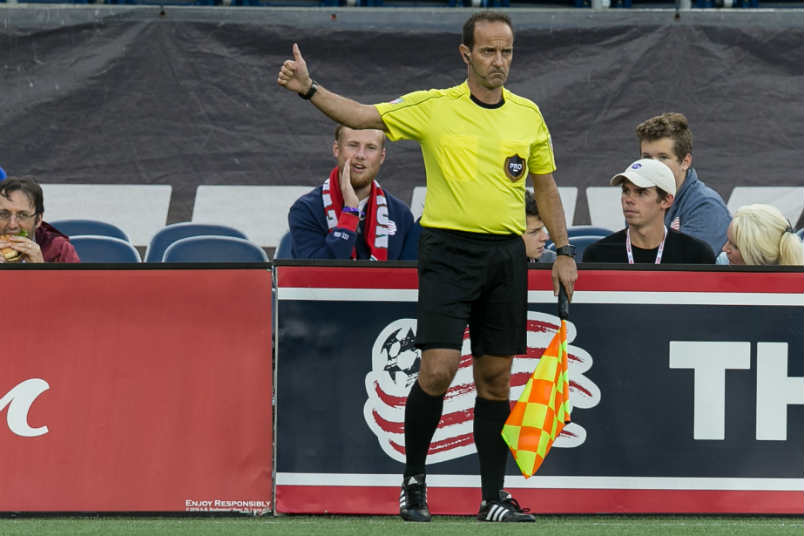 By Jason Davis – WASHINGTON DC (Apr 20, 2018) US Soccer Players – The Video Assistant Referee system, aka instant replay, is coming to the World Cup whether we like it or not. By edict of FIFA, games at the 2018 tournament in Russia will include the controversial review technology that is even now creating waves of confusion and frustration in places like the United States, Germany, and Italy. We’re barely into the era of first adopters and FIFA has committed to tossing VAR into the pressure-packed, closely watched maelstrom that is the World Cup finals.

There are a host of issues with deploying the VAR system at the World Cup. We’ve already see a lot of them from Major League Soccer and the Bundesliga. The FIFA-approved process for using VAR has led to long delays, strange decisions, and a lack of consistency in its application. Though the VAR usage rules are clear, fans and coaches alike are still unclear about its intended impact on the game. VAR promises to correct erroneous decisions in relatively short order. Hard data aside, many observers in the leagues where VAR is in use express dissatisfaction with it to this point.

The English Premier League recently chose to delay implementation of VAR in the world’s richest domestic competition until at least the 2019-20 season. A majority of clubs decided the technology needed more testing. That relegates its use in England to the FA Cup and Carabao Cup for next season. The vote was behind closed doors and none of the clubs against using it next season chose to comment publicly. Still, it appears clear that English executives believe VAR to be more trouble than it’s worth. Even if it would fix a bad call or two, potentially to their benefit, the process is clunky and flawed.

At the top of the list of complaints is the lack of communication with those in the stadium. Fans, players, and managers are in the dark while the referee goes through the steps required by the rules governing VAR, then blindsided when the referee announces that decision.

FIFA’s solution to the problem will be to display the video used by the referee to make his decision on the stadium screens in Russia. It won’t happen during the VAR review, as that might lead to the crowd’s reaction biasing the referee. The referee makes the call, then the live audience sees the replay. It’s something, but it’s unlikely to mollify angry fans in the heat of the moment, even when the call is obviously correct.

“Obviously correct” calls after “clear and obvious errors” is an ideal VAR has yet to reach. The number of instances in which referees made difficult but subjective calls at full-speed and then reversed them with the VAR process is too large for comfort. Many of the decisions a referee makes in a game are subjective by nature. That creates issues every time VAR comes into play.

Should all interested parties simply accept that delays will be part of the game at the highest levels? Officials can only streamline the amount of time it takes to speak to a VAR, review video on the sideline, and indicate a decision so much. In a sport that uses a running clock and counts the flow of the game amongst its most appealing characteristics, even a minute or two can feel like an eternity.

FIFA is in the midst of training the World Cup referees for the implementation of VAR at the tournament. A few are already familiar with VAR from its use in their domestic leagues, but for a large percentage, World Cup games will be their first chance to use the technology in a live competitive match. Pre-tournament training is the bare minimum needed to install VAR on the game’s biggest stage. How prepared can referees be for the real thing? As the stakes grow from the Round of 16 on, the pressure referees will be under to properly utilize the system will be immense. It’s a system that will utilize four VAR officials at every match, including one focused solely on offside decisions.

A fully mature VAR system probably belongs at the World Cup. While the system won’t correct all calls, it could fix game changing moments before they turned into full-blown controversies. The game would be fairer and the tournament would deliver a more satisfying result.

Let’s set aside the admittedly romanticized and esoteric notion that controversial moments are pa. VAR is more likely to cause a particularly noxious brand of controversy in this World Cup than mitigate it. The technology and process are not mature, the fans have not accepted it as part of the game, and even referees with a season’s worth of game utilizing it in domestic competitions struggle to do so correctly. Forcing VAR upon the World Cup when the eyes of the entire world will be watching is courting disaster.

FIFA’s only real trial at the international level occurred at last year’s Confederations Cup, a shaky debut that left no one satisfied. The year interlude between that tournament and the World Cup didn’t provide much in the way of practice for the referees.

If FIFA has any cover for the choice to use VAR at the World Cup, it’s that any chance it has of being fully embraced by the soccer-loving masses probably requires a painful period of integration like the one happening in MLS, the Bundesliga, and elsewhere. Using the technology in smaller competitions or at lower division levels won’t expose enough fans to the process to allow them to adjust.

The World Cup just seems like an odd place to force such a massive change down the throats of fans, players, and coaches alike. No one wants results to turn on unfair decisions, but the rush to eliminate those egregious errors is pulling a host of other problems along in its wake.

Maybe that’s the bigger question less than 60 days out from the start of the World Cup. Why now? Why here? Is the most monumental change to the sport in decades ready for its brightest spotlight?