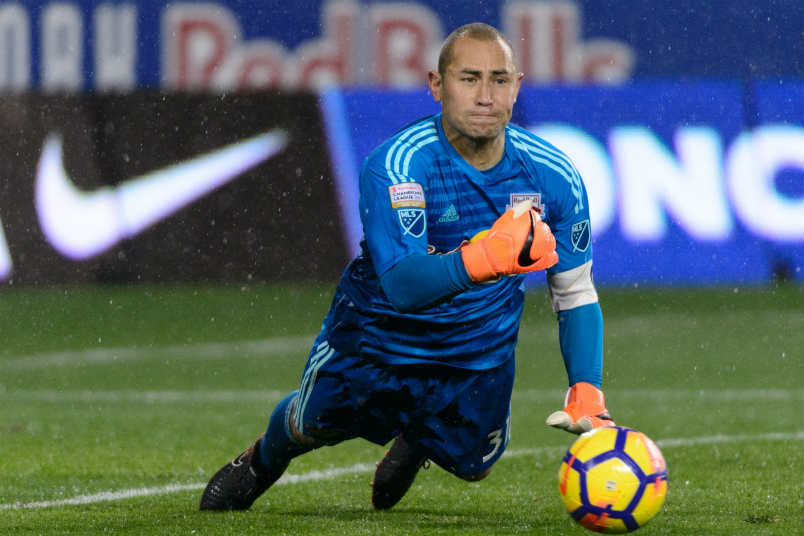 By Luis Bueno – RIVERSIDE, CA (Apr 4, 2018) US Soccer Players – Twice, Liga MX clubs have gone to Toronto’s BMO Field in search of a result in CONCACAF Champions League play this year. Twice, Liga MX clubs have left with a difficult result. Toronto FC seems destined for a spot in the Concacaf Champions League final, an accomplishment the club would obtain at Liga MX’s expense.

So does that mean MLS is on par with Liga MX? After years of attempting to close the gap, has MLS finally done it?

One victory or even a pair of wins will not atone for years of Major League Soccer near-misses. Still, Toronto FC is taking great steps toward narrowing the gulf that exists between the quality of play in Liga MX and MLS.

Toronto FC will head to Mexico City with a 3-1 aggregate lead over Club America after winning the first-leg at home on Tuesday. The club has already bounced Liga MX powerhouse Tigres UANL from the tournament and is one step away from taking a major step for club and league.

Such success would point to MLS finally being at the same level as Liga MX, but that is not the case as of yet. The leagues are not quite equal in terms of quality and caliber. That said, for MLS to produce a team like Toronto FC is significant. Liga MX clubs recognize as much. Toronto FC is a side that can compete with any club in the Western Hemisphere, speaking well for all of MLS.

Liga MX is still the premier league in North America but to say that it is miles ahead of MLS is untrue. What Liga MX is learning through Toronto FC’s run is that MLS is strong enough to produce an elite club, one that can compete with any team on this side of the world and one that is capable of inflicting pain on any Mexican side.

Other leagues in this region cannot say that. Costa Rica has a solid national team and a competitive domestic league but the league does not the ability to produce a team that can go toe-to-toe with any team in this confederation. Neither can Honduras, Panama, or any other Concacaf nation.

Certainly there are factors in MLS’s favor that leads to this, most importantly resources. Costa Rican clubs cannot drop millions of dollars in salaries and transfer fees the way MLS teams can. Panama City is not a destination spot like Los Angeles or New York that can attract big-name talent. Stadiums across MLS are modern and state-of-the-art. The infrastructure in MLS towns is superior to that of any other league, Liga MX included.

It’s also been those factors that have given MLS clubs the false sense of competition. Finances and other resources alone do not constitute competitiveness. That manner of thinking has kept Mexican clubs like America and Chivas seemingly in contention for titles in Mexico, but that does not equate to success. It is teams like Tigres and Monterrey who have enjoyed the most recent successes despite not having the perception of being rich clubs like their other more popular counterparts.

Toronto FC has been able to utilize its resources and is moving the league forward while doing so. The club has not let much stand in its way. Liga MX teams are much further along in their respective campaigns than Toronto, who was in preseason just five weeks ago. Toronto FC also did well to get a result out of Mexico. While the club ultimately lost to Tigres 3-2 in the return leg of their quarterfinal series, Toronto scored twice and claimed the series because of the away goals rule.

Typically Mexico is where MLS clubs have gone to die in previous years. It happened already this year as Seattle lost by 3-0 to Chivas in another quarterfinal series, a game that was not exactly a ringing endorsement for MLS.

While MLS has always had superstars and talented players, Sebastian Giovinco may be one of the league’s all-time greats. Around him is a great collection of talent led by a strong coaching staff and an ambitious front office.

Toronto FC is not alone in carrying the MLS flag. New York Red Bulls and Chivas de Guadalajara will square off in the other semifinal series to determine who will play for CONCACAF supremacy. New York did what Toronto FC could not do and won in Mexico, claiming a 2-0 win at Tijuana en route to a decisive 5-1 aggregate-goal win in their quarterfinal series.

If the league’s dream finale of Toronto FC vs New York happens, it will be further proof that the two leagues are on par with one another. There will likely never come a point where MLS has undoubtedly surpassed Liga MX. The debate over which European league is best rages on year after year and whether the English Premier League is superior or if the Bundesliga is best or perhaps La Liga depends on who you ask.

That debate will rage on for years on this side of the world as well. If Toronto or New York become the first MLS team to win a Concacaf Champions League crown, MLS supporters will point to that. Meanwhile, Liga MX backers will point to the previous decade’s dominance. Both sides will be a bit justified in their own arguments, but there can be no clear winner in this debate.

What is clear is that MLS has closed the gap and can produce a team like Toronto FC. Liga MX has for years the ability to produce clubs the caliber of Toronto FC but for MLS to finally boast that speaks well for the league and having a stage like the CONCACAF Champions League to participate in helps prove as much.