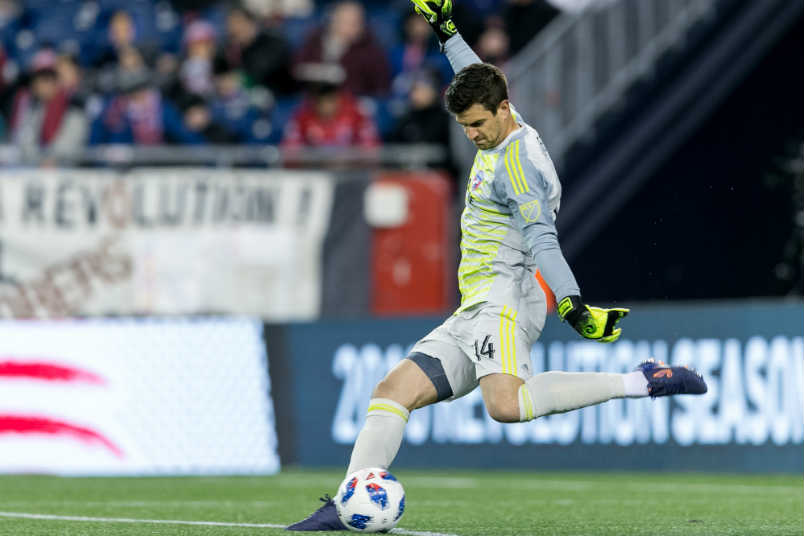 By Charles Boehm – WASHINGTON, DC (Apr 20, 2018) US Soccer Players – It’s not often that you see an American player make his top-flight professional debut at age 29. It’s even rarer for a player to arrive at that milestone via a path like Jimmy Maurer’s.

A supplemental draft pick of the New York Red Bulls way back in 2011 after a solid NCAA career at South Carolina, the Georgia native didn’t get much of a chance on his first introduction to MLS. So he joined up with the then-fledgling NASL, carving out a career for himself with the Atlanta Silverbacks and New York Cosmos. There was a yearlong adventure to Chile’s Universidad de Concepcion thrown in for good measure. That experience got him featured in season 42 of the TV show House Hunters: International.

Maurer would go on to play more than 100 games for the Cosmos, helping the storied brand’s rebel reboot win three NASL championships. Last year, Maurer helped out FC Dallas on a short-term basis when that club faced a goalkeeping shortage due to Jesse Gonzalez’s Gold Cup call-up to the USMNT. When both the Cosmos and NASL finally succumbed to more than a year of prolonged instability and shuttered operations earlier this year, FCD at last gave Maurer his hard-earned shot at the top division.

“It was a pretty crazy year, going all the way back to the end of 2016. A lot of uncertainty at that time,” Maurer recalled in an in-depth conversation with USSoccerPlayers.com this week. “Luckily it worked out and the Cosmos were able to keep going, got a new owner in and stayed there for one more year. After going through that experience and seeing the uncertainty that can develop, I was a little bit more prepared going into this offseason.”

Fast-forward a few months Maurer’s not only the starter in Dallas but also carrying an undefeated record (2-0-3) and one of the best goals-against averages (0.60) in the league. It’s an impressive, and perhaps ironic, start to MLS life for a player long associated with a team – and league – whose identity revolved around opposition to it.

“I’ve had people ask me that: ‘Why are you going to the MLS with everything that they’ve done to the NASL?’” revealed Maurer, noting that even as an NASL veteran, he and his fellow players were as much in the dark about the league’s future as the general public, left to check Twitter for updates just like fans. “I understand that sentiment and I was treated very well by the different ownership groups that I had in New York. And who knows, maybe bad things happened behind the scenes. But at the same time, it’s hard for me to speak to that when I don’t know, I don’t have firsthand knowledge of that.”

“My dream was always to come and play in the MLS. The MLS is the top league. The infrastructure, the players that are here – it’s the top division, so my dream was always to come here,” he added. “I think most players always wanted to make the jump. As players, it’s our job. As with anyone in any industry, you want to be the best and move your way to the top levels at everything.”

The NASL’s closure – for now at least – unfolded mostly in a series of courtrooms and meetings with US Soccer Federation officials. It left players, employees, and fans to pick up the pieces and in some cases, scramble to salvage their careers and livelihoods.

Landing in MLS, Maurer is among the lucky ones. He’s certainly seen upheaval and suffering all around him.

“For a lot of players, it’s just a terrible thing that’s happened. A lot of jobs went away overnight, seemingly,” he said. “So many guys had to take pay cuts, had to have that uncertainty for them and their families. The NASL was an amazing landing spot for a lot of guys who were kind of fringe MLS guys, or doing well in the USL but wanted to make some more money, and it’s a great opportunity for guys where you could make a living if you had a wife and a kid. If you have kids and a family, it’s pretty tough trying to bounce around the country in some of these leagues where you’re making $20,000, $30,000.”

Maurer pointed to the example of former teammate Ryan Richter, an NASL star who retired at age 28 to move into coaching rather than continue scrounging out a living on the tumultuous pro landscape.

“You wish these guys could’ve kept playing, but that’s real life. You have to make decisions off the field as well,” said Maurer.

“I don’t want to come off negatively against the USL – I have a lot of friends in the USL, and that’s a great league. They built up tons of teams, they’re doing great things, it’s just bad when you hear about what the money can be sometimes … You’re asking guys to move across the country every year or two when you’re barely getting by, having to work second jobs, working in stores or coffee shops in USL, or coaching and different things on the side just to make ends meet. You just want guys to have a lot of avenues, you want there to be ample opportunities for professionals to really commit to the game and develop, and that’s one thing that’s tough to see.”

“The other thing too is, I know NASL teams, maybe we didn’t have the biggest fanbases but at that level we had some extremely dedicated fans. Maybe they weren’t 40,000 people on the weekends, but the people that were coming day in and day out were so dedicated. So that’s the thing that really sucks for them, too, all of a sudden overnight they just don’t have a team. It’s obviously terrible for the players because guys are losing money, having to move families, maybe completely out of jobs, maybe having to retire. But even then for the fans, front-office people, club employees, just not to have a team at all, not to have someone at all… it’s rough.”

Maurer’s experiences have left him a keen proponent of unity and collective strength through players unions and associations. He’s encouraged by the steps USL and NWSL players are taking.

“Definitely, I think unions are fundamental,” he said. “In any industry in America – especially living in the Northeast – you see how much power they have. A lot of times the only way to really make movement and get things done is to join together and make a stand.

“In the USL, and if the NASL comes back,” he added, “I definitely think unions would be smart. it’s not to do anything crazy, to say overnight everyone needs to make double the money. I think sometimes people hear ‘unions’ and think people just want to be money-hungry and make demands, that it’s all about wages. But the biggest thing right now when I talk to guys in the USL is just trying to get some standards put into place, like health insurance or 12-month contracts, health insurance for your family… in the United States right now that’s a huge, huge cost if you’re having to go get individual health insurance on your own. So things like that would really make a big difference.”

It’s all made Maurer more appreciative than most of the baseline of infrastructure and opportunity on offer in MLS. With Gonzalez returning from a knee injury, his starting spot is far from secure. He’s enjoying his new chapter and is quietly optimistic about the possibilities for a Dallas squad that’s looked both talented and mercurial this year.

“I came here to try and play and show that this is a level that I can compete at, and I think it’s been going all right so far,” he said.

“We know we’ve had some up-and-down performances. We dropped points early on at home, which to be a top team, you can’t do. But we’re all still hungry, and we want to keep working forward. With that said, we feel like we can really, really make a push this year. I think we have a lot of confidence in ourselves, that we’re only scratching the surface of what type of team we can be,” he added, praising the tactical variability in Dallas under coach Oscar Pareja. “I understand a lot of people aren’t expecting us to do much this year, but I think there’s some great potential in this group for sure.”