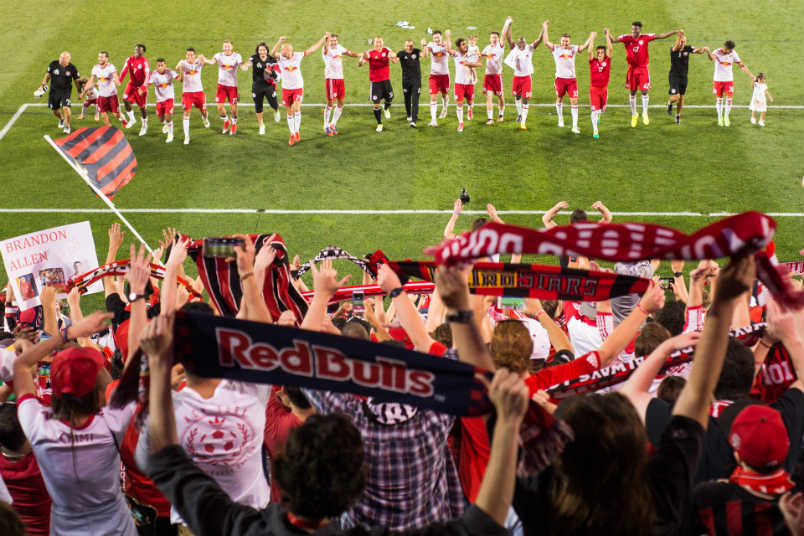 By Clemente Lisi – NEW YORK, NY (Apr 30, 2018) US Soccer Players – The Hudson River derby, possibly for the first time in its young history, will feature two teams playing in prime form. While the New York Red Bulls have dominated this rivalry since it started in 2015, NYCFC has looked strong in the past two years. That leads us to this season, where both the Red Bulls and NYCFC are playing like title contenders in an Eastern Conference that has become ever more competitive in recent years.

Whether New York is red or blue depending which side of the river you live on, this could be the most competitive derby these sides have ever contested. In 10 all-time meetings including a US Open Cup match last year, the Red Bulls have won six games, NYCFC just three. Only one game between them – their final encounter of the MLS season last August – ended in a draw. That 1-1 game at Red Bull Arena may have been the first even matchup between the two teams.

Both RBNY and NYCFC made the postseason in 2017 and expect to contend for the title this season. NYCFC are currently in first in the Eastern Conference by virtue of its strong start, while the Red Bulls are in sixth-place. Jesse Marsch of the Red Bulls and Patrick Vieira of NYCFC have become the gold standard for coaches in MLS. Both have links with opportunities in Europe. Marsch’s was with another Red Bull club, the one in Salzburg. Arsene Wenger’s recent decision to leave Arsenal at the end of this season has prompted speculation that Vieira could move to the Premier League club.

The Red Bulls have suffered a bit of a post-Champions League hangover in recent weeks following its defeat to Chivas in the semifinals. However, they came up big this past Saturday with a 3-2 victory on the road against the LA Galaxy. NYCFC started the season unbeaten in its first seven games and are coming off a 3-1 home win Sunday against previously unbeaten FC Dallas.

It should come as little surprise that the player who has scored more goals than anybody else in the Hudson River derby is Bradley Wright-Phillips, one of the most prolific scorers in MLS over the past three seasons. He has 10 goals against NYCFC, benefitting from playing alongside great playmakers like Thierry Henry and Sacha Klejstan.

“I’m lucky enough to have played with great players,” he said. “Playing with Sacha got me a lot of assists. There are players around the world who get assists from number 10s or wingers. It is what it is. If people want to say that, then they’re not on my side.”

There will be plenty of fans on Wright-Phillips’ side come Saturday when the Red Bulls host NYCFC in the first of three regular-season meetings this year. The derby is expected to draw a full house of over 25,000 this Saturday at Red Bull Arena.

“The way we play is very high-pressure, attacking football and move the ball very fast and force teams into a quick game,” Wright-Phillips said. “A lot of teams like to pass around the back and take it easy. We like to play at a faster pace.”

NYCFC counters the Red Bulls’ 4-2-3-1 with a compact 4-3-3 featuring David Villa as its most lethal striker. Villa scored two goals Sunday, reaching 401 career goals for club and country and joining a star-studded quintet of current players – Cristiano Ronaldo, Lionel Messi, Luis Suarez and Zlatan Ibrahimovic – to hit that milestone. Villa has scored four times in his career against the Red Bulls. No stranger to taking part in heated intra-city derbies following his time at Spanish clubs such as Barcelona and Atletico Madrid, Villa rallied his teammates Sunday in the Yankee Stadium dressing room.

“Get ready for the derby,” Villa announced in a pep-talk after the Dallas win, “because we need to win again!”

Villa, who tallied his first career MLS hat trick last August in NYCFC’s 3-2 comeback win versus the Red Bulls, said it won’t be easy to get points on the road. “We play away in New Jersey, and it’s important to go away with a good face,” he added.

It’s the only meeting in New Jersey this season. The teams meet for a second time July 8 at Yankee Stadium and again on August 22 in the Bronx. It isn’t out of the question that the Red Bulls and NYCFC could face off in the playoffs, adding another layer of intensity to this rivalry.

The derby’s outcome could have a lasting effect on the clubs. Nonetheless, for Wright-Phillips, his personal accomplishments have been overshadowed by the Red Bulls’ inability to win an MLS Cup during his tenure. All the wins against NYCFC won’t change that.