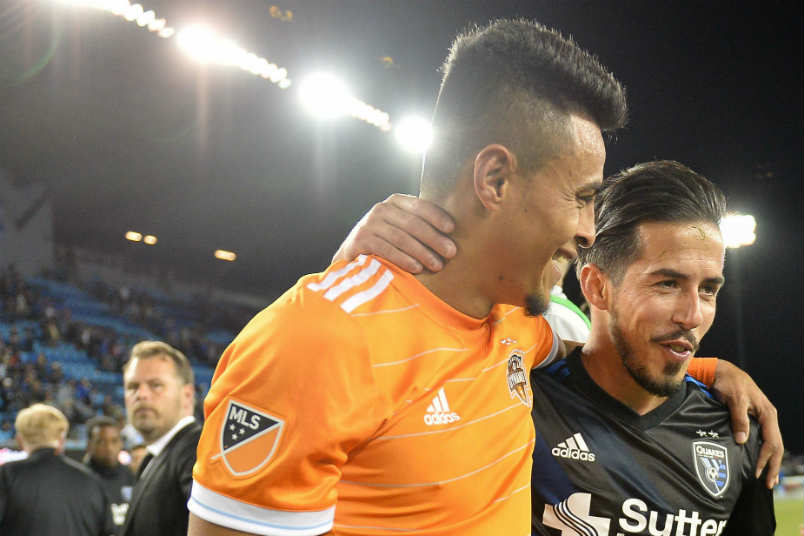 By Clemente Lisi – SAN JOSE, CA (Apr 16, 2018) US Soccer Players – MLS is loaded with rivalries. Some are intra-city, others regional. For example, the newest one to take the league by storm – LA Galaxy vs LAFC – is certain to entertain given how intense the first edition of “El Trafico” proved to be. Then there’s the league’s unique business structure, relocation, and expansion that adds an extra twist to rivalries other places around the world don’t get a chance to experience.

The biggest example of this takes place each time the San Jose Earthquakes play the Houston Dynamo. These are two clubs that perfectly illustrate the Venn diagram of MLS teams and their unique and complicated histories and backstories. Not linked by geography, the Earthquakes and Dynamo do have a shared past, one fraught with the heartbreak of relocation and joy of expansion in a period of just a few years.

It’s been ten years since the Quakes returned to MLS after the original team moved to Houston in time for the start of the 2006 season. The Anschutz Entertainment Group, the team’s owners at the time, claimed it had lost $20 million on the franchise since buying it in 2003. Houston was a target either through relocation or expansion and the building of a soccer-specific stadium in the city sealed the deal.

That left the Bay Area without a team. Even with the Clash turned Earthquakes problems, this was a team with history. They hosted the first MLS game in 1996. They won two MLS Cups. The relocated Dynamo did too, taking the title in 2006 and 07 with the bulk of the roster they got from San Jose.

“In the early days, there was real emotion because San Jose fans lost their Quakes who dated back to the NASL and were branded in the Bay Area,” said Houston television and radio host Glenn Davis. “Not to mention that they felt those two titles were ‘gifted’ to Houston, which is a fair statement. It was a team with wonderful men that the whole community could look up to! Still, Houstonians just wanted the return of professional soccer. Little did they know they were getting the best team in the 12-team MLS at the time.”

The Dynamo featured a group of players now-regarded as legendary, including Brian Ching, Ricardo Clark, and Dwayne DeRosario. All of them had also been part of the Quakes when they played at Spartan Stadium in San Jose. Another player, the late-blooming Chris Wondolowski, had been drafted by the Earthquakes in 2005. In a quirk of fate, the Bay Area native returned to the Quakes in 2009 and became a scoring sensation.

“Of course, Houston feels the loss of a player like that,” Ching said of the Wondolowski trade in exchange for Cam Weaver to Houston. “Chris will go down as one of the best goal scorers in league history. Had we kept him in Houston – and he was able to achieve those numbers then – we could have possibly won another championship. Having said that, there is no way of knowing if things would have worked out the same had he stayed. So personally, I have been extremely happy that things have gone so well for him back in San Jose.”

Wondolowski remains the only player still active from those days when the Earthquakes became the Dynamo. While many agree that the rivalry between these two franchises has faded in recent years, there’s no denying that these two clubs, for better or worse, are forever linked.

“I don’t think that Houston fans feel the same as a San Jose fan because Houston fans didn’t lose something like the San Jose fans did,” Ching said. “Also, the fact that there haven’t been many meaningful games between the two clubs has led to the loss of that rivalry feel.”

Davis agreed with that assessment, saying Houston and San Jose “are battling for relevancy” in their respective markets.

Another important figure that links the two franchises is Dominic Kinnear. The former USMNT defender, currently an assistant coach with the Galaxy, coached the Quakes in the early 2000s. He guided the Dynamo to two MLS Cups and eventually returned to San Jose in 2014 only to be replaced last year.

“Dom has a history in the Bay Area with the professional Blackhawks and Earthquakes and grew up in that soccer playing region,” said Davis. “From the Houston perspective, he did an amazing job handling the team and the challenges of the move. The re-location to (Houston) had to be especially taxing for those players with families. I can only imagine how many conversations and assurances he had to make to players. That said, I think the players knew if they wanted to continue their careers they would need to make the move in most cases.”

The first-ever match between the two clubs took place on May 22, 2008, when the Earthquakes defeated the Dynamo 2-1 at Buck Shaw Stadium on second-half goals by Kei Kamara and Ivan Guerrero. When the two Western Conference rivals played on Saturday, it marked the 23rd meeting between the sides. The Dynamo hold the all-time series edge with an 11-8-3 record. Although both teams are near the bottom of the conference standings early in the season, they played to a lively 2-2 draw at Avaya Stadium.

“We have to win these kind of games, that’s for sure,” bemoaned Quakes coach Mikael Stahre in the post-match news conference. “We must analyze it in a smart way.”

Davis said San Jose and Houston could continue to struggle and “maintain pace with those clubs that are investing more resources…. The question from the standpoint of on the field is, simply, have both clubs done enough in the offseason? Do their fan bases truly believe top to bottom that they are trying to win the MLS Cup? Tough to tell… but this is a legitimate and fair question.”