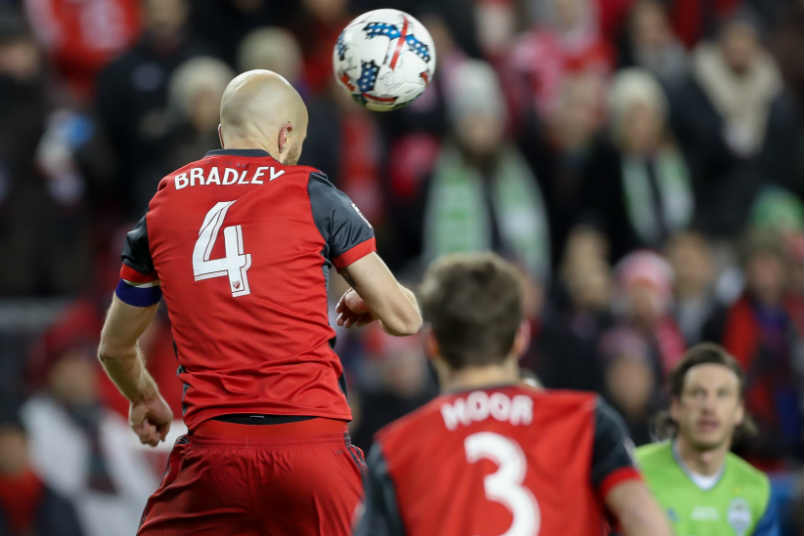 By Jason Davis – WASHINGTON DC (Apr 13, 2018) US Soccer Players – There’s a new challenge in front of Toronto FC, a challenge born from the club’s remarkable success and a twist of fate. Don’t screw it up.

What once was a mote of belief is now a fully formed expectation. Toronto FC plays for the 2018 Concacaf Champions League title as the final favorites. That’s what happens when you beat better Liga MX teams than the one you’re facing in that final. Toronto knocked out Tigres and Club America to face Chivas.

To put it another way, Toronto beat the 3rd and 4th-place teams in the Liga MX Clausura to play the 15th-ranked team. That doesn’t say much for the New York Red Bulls who couldn’t handle a pragmatic Chivas, but it says plenty about Toronto. The reigning MLS Cup and Supporters’ Shield holder moves into the final of the region’s club championship with the label of “favorite” whether they want it or not.

It’s the Concacaf title or bust for Toronto, with all of MLS now seriously looking at that Club World Cup spot.

Chivas, despite the history, is not a good team. The Mexican giants are wallowing in the bottom third of the Liga MX table with no time and not enough quality to make up the distance on the playoff places. Over 180 minutes against New York, they scored just once. In the second leg at Red Bull Arena, the Goats willingly conceded possession, put 10 players behind the ball, and managed just one shot on goal. It was an exceedingly cynical performance, but it worked.

New York lacked the ability to scored when it counted. They relied too heavily on Bradley Wright-Phillips and paid for that one-dimensionality. Meanwhile, Toronto is a well-rounded side that gets scoring contributions from players all over the field. The hero of the semifinal victory over Club America was Jonathan Osorio, a name well down the list when considering TFC’s most important cogs. Sure, Toronto occasionally relies on Sebastian Giovinco to score a wonder goal from a free kick or for Jozy Altidore to expertly finish difficult service. However, the side’s most notable trait on the attacking end of the field is building complete team goals that aren’t about singular moments of individual brilliance.

It’s a testament to TFC’s excellence over the last few years that anything other than a Champions League title will be disappointing. Toronto’s chances of even getting to this point were middling at best. Despite the triple haul of trophies the club carried into 2018 and the clear quality of talent throughout the roster, the reality remained. Mexican clubs are typically stronger, especially deeper into the team. Getting by the Rapids wasn’t a roadblock. After that, the task was daunting.

Now, the message is simple. “Don’t screw it up”, emanating not just from TFC’s fans, but from so many across Major League Soccer. Toronto carries the banner of the league like Real Salt Lake and Montreal before them. Only this time, it’s the MLS team as the favorite.

Regardless of what happens, the Reds have established a new model for how to achieve success in the Champions League. They’ve done it on their terms, sending a clear message not just to the region, but to MLS as well. It wasn’t good fortune or a stacked draw that got them here. MLS teams should take note of what exactly brought the Reds to this moment.

It goes beyond “spending”, though Toronto’s willingness to do exactly that is most crucial to the club’s success. Getting through incredibly difficult series against two of Mexico’s best isn’t just a matter of system or belief. Toronto has excellent players who its owners were willing to pay handsomely to bring in-house. That group includes Giovinco, Altidore, and Michael Bradley, but also Victor Vazquez, Gregory van der Wiel, and others.

Beyond the payroll, Toronto spends significant resources on scouting, data analysis, and recruitment that bear fruit in the form of players who fully buy into Greg Vanney’s approach. From starters through to bench players, Toronto can count on players who understand their roles and can perform within them at a high level.

Before the club blazed a new trail through the Champions League, high profile players joined TFC because they believed in the vision for the team. People like Vanney, GM Tim Bezbatchenko, and former MLSE president Tim Leiweke did their jobs. With Bezbatchenko’s decision-making, the club collected a group of talented, but perhaps under-valued, supporting players to push the team towards ambitious ends. Now, just a few years later, Toronto is on the verge of accomplishing everything on its list and establishing itself as a power not just in MLS, but throughout the region.

Thus far, only Toronto FC has had the stomach for the type of investment needed to play on the level of Tigres, Club America, and clubs like them. Perhaps Atlanta can join that group, though United will have to qualify for the Champions League first. NYCFC seems capable of the same but has yet to stake a claim to a CCL spot. Clubs like Seattle and the New York Red Bulls ran up against the ceiling of their capabilities. In fairness, Seattle’s injury crisis makes it hard to know what that ceiling actually is in 2018. LAFC is too new to judge anything about them, the Galaxy is floundering with identity confusion, and there’s not another team in MLS that can claim to be close to Mexico’s best based on the price of the talent in their teams.

TFC might just be an MLS unicorn, a one-of-a-kind club striking all the right chords in a present day symphony. An organization can only be a trendsetter if others intend to follow the trend.

Perversely, the unique character of Toronto adds even more pressure to their Champions League final performance. Just beat Chivas right now, Toronto because we don’t know when there will be another team like you. We don’t even know if you’ll be the same next year or the year after that. There’s no reason to think we can count on an another MLS club to match what you’ve done.

This is what Toronto, and fate, have made. Dear TFC: Don’t screw it up.