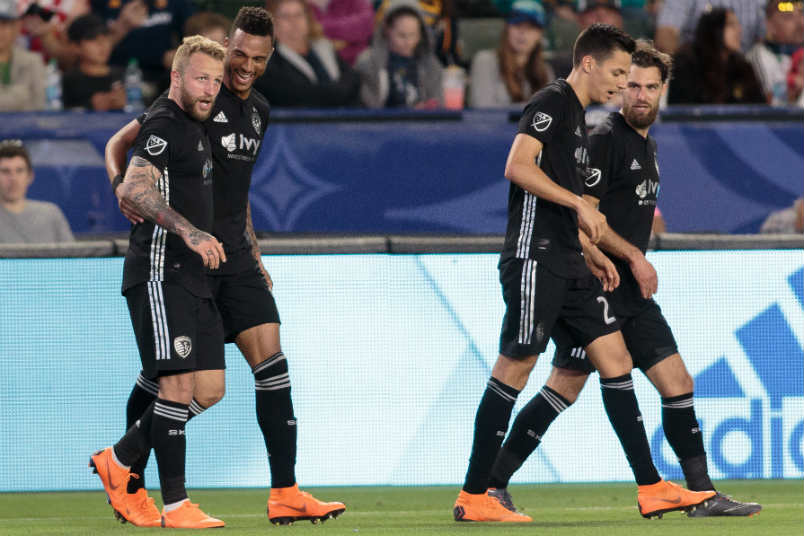 By Jeff Rueter – SAINT PAUL, MN (Apr 19, 2018) US Soccer Players – After years of relatively balanced conferences in MLS, the past 16 months have seen the East stand head and shoulders above its Western counterpart. Nearly every list of Supporters’ Shield or MLS Cup projections focuses on teams in the East, with few true contenders across the Mississippi. In my latest Power Rankings, the top five teams in the league all play close to the Atlantic. And you may ask yourself, well, how did we get here?

The simple answer might be allocation money. The additional funds grant teams extra leeway to acquire higher-level talent from outside of MLS. This has given a major advantage to teams with more money to spend, but funding only gets you so far.

Marquee players want to live in bigger, cultural cities. In general, those tend to reside in the Eastern corridor. With more money involved, there’s a growing hierarchy of haves and have-nots in terms of luring potential targets. A Bundesliga defender would love to live in Florida and is certainly familiar with Orlando as a tourist destination. Would selling him on Salt Lake City be as easy?

Of the truly global markets in the USA and Canada, only Los Angeles and possibly Seattle hold a candle to the population centers of New York, Orlando, Atlanta, Toronto, or Montreal. It’s created an interesting dynamic. While many of the biggest markets are in one conference, it’s created a greater parity in the West.

For years, the Western Conference seemed to be the Galaxy’s playground. Real Salt Lake and Sporting Kansas City carved a niche as well-run clubs with savvy decision makers. After finding their domestic core, they were able to make calculated risks on a Designated Player or two at a time. As more money moves around MLS, being rich isn’t enough. It’s about best outwitting the league’s byzantine roster rules.

This year, SKC is far and away the class of the Western Conference. Their defense seems to be falling back into place after a historically stout 2017, and new faces Johnny Russell and Felipe Gutierrez have catalyzed the team’s best attack in years. Beyond Sporting Park, however, there are no certainties in the conference.

At first glance, it seems Peter Vermes’s greatest challenge is bound to come from the City of Angels. LAFC started off as the league’s most impressive team, but have fallen upon shaky times ever since halftime of El Trafico. As a rule, it’s never wise to start the ‘OLE’ chant with half an hour left in a match. Still, Bob Bradley’s no slouch at the helm, and the duo of Diego Rossi and Carlos Vela is among MLS’ best attacking pairs. The Galaxy, meanwhile, will go as far as Zlatan wills them. The defense needs to make forward strides, but Perry Kitchen’s been a welcome addition to solidify the midfield.

Traditionally, Cascadia has fostered the conference’s best sides. Rocked by injuries, the Sounders have fallen completely flat out of the gate, with just a single point in their first four contests. The reinclusion of Ozzie Alonso seemed to add a needed level of composure, freeing US international Cristian Roldan to dominate the game more. That doesn’t even factor the mysteriously prolonged decision to suspend Clint Dempsey for an extra match, keeping Seattle from getting into their rhythm. It may take another month, but Brian Schmetzer’s men seem a good bet to return to the playoffs as usual.

Further south, however, things are less optimistic. Portland eeked out its first win last weekend, possibly aided by a referee’s blind eye towards a nasty challenge by Alvas Powell. Still, the team has yet to truly get clicking under Gio Savarese, and the defense has leaked in a league-worst 14 goals.

Vancouver, meanwhile, is incredibly erratic. One of three teams to play 7 games this season, the Whitecaps have netted a respectable 10 points. There’s reason for concern, though. A -3 goal differential is hardly encouraging. If Kei Kamara is to miss extended time, their gameplan falls completely flat.

Fellow playoff returners Real Salt Lake looks even more likely to fall apart, having been completely porous in defense. The team seems totally unbridled under Mike Petke, who’s an excellent man-manager but often struggles to get a clear tactical identity. That doesn’t bode well for such a young side.

After a historic collapse last season, FC Dallas has begun the process of licking their wounds. The Houston Dynamo have seemed to take a step back in year two under Wilmer Cabrera, and an aging defense doesn’t do much to guarantee future success. San Jose has struggled to gel under new coach Mikael Stahre, with just two points in their last four contests. Minnesota hasn’t solved their defensive woes, and it may take a couple of weeks for the team to get used to life with Darwin Quintero. While the Colorado Rapids have impressed thus far, it may take a Comeback Player of the Year performance from Shkelzen Gashi to keep the momentum flowing.

There are far more questions than answers in the West. On the one hand, that makes for fantastic spectating, as nearly every game within the conference feels winnable for either side. It also might help Sporting KC squeak past Eastern rivals to win the Shield, with fewer conference matchups to truly make them sweat.

Either way, it could be the beginning of what the league has worked tirelessly to avoid. Since day one, MLS stressed parity, with a forgiving playoff format giving more teams a piece of the pie. Still, a greater influx of money to spend means the teams with better sales pitches can now separate themselves from the pack. As more of those sides reside in the East, the conference imbalance may be the beginning of a two-tier league.