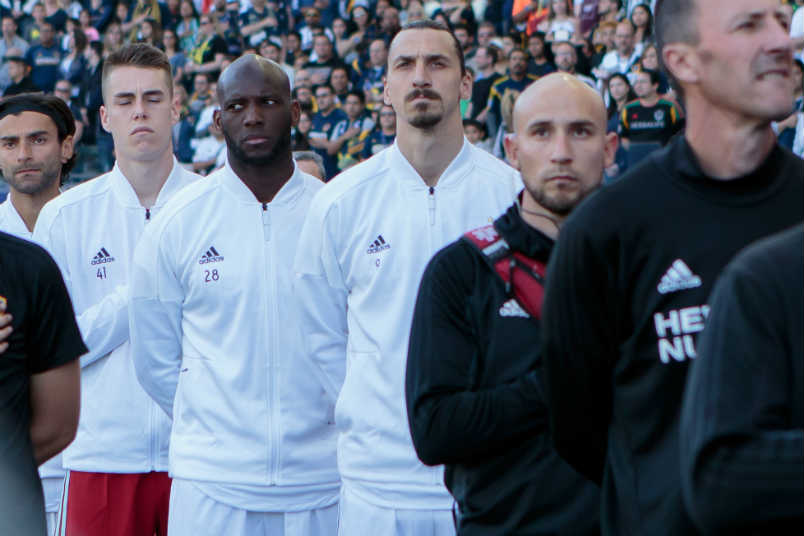 By Clemente Lisi – NEW YORK, NY (Apr 9, 2018) US Soccer Players – We may be just over a month into the 2018 MLS season, but it has already produced several milestones. From record-breaking goals to how the league’s newcomers are faring, the season is already telling its story.

MLS may very well be the most unpredictable domestic competition in the world. While some use that to disparage it, fans should embrace it. It means that every game counts and the outcome always in balance. That generally makes for a more exciting product. Unlike the Bundesliga, where Bayern Munich seems to run away with the title almost every season, MLS teams can go from first-to-worst from one season to another – sometimes even in the same season such as FC Dallas did in 2017.

For now, FC Dallas and NYCFC remain undefeated, while DC United, Portland Timbers, and the Seattle Sounders are winless. NYCFC and Sporting Kansas City are both at 13 points, but can either team see that through? The current snapshot, in other words, can dramatically shift in the coming weeks and months.

Other questions persist. Will the Los Angeles Galaxy get much better with Zlatan Ibrahimovic? One thinks so after last week’s amazing two-goal debut and 40-yard goal, but the Galaxy’s 2-0 loss at home Sunday night puts it all into question. Will Toronto’s Concacaf Champions League run hamper its efforts to repeat? Not likely given how far apart the two competitions are when it comes to playing games that matter. Can NYCFC’s stout defending and impressive goalkeeping help win it the title? In a league where defending is often not a priority, it’s not likely.

With that, here’s a snapshot of what’s going on in the early going of the 2018 MLS season:

The trend in recent years to bring in younger foreigners, something that came to define the league. We may be seeing that flipped on its head. While no one can argue with the amazing skills and contributions of players like Sebastian Giovinco at Toronto FC and Miguel Almiron at Atlanta United, the recent arrival of Ibrahimovic by the Los Angeles Galaxy may move the pendulum once again. His arrival brought a buzz along with it not seen since David Beckham joined the team more than a decade ago.

Ibrahimovic’s two-goal performance in the comeback against LAFC raised the league’s profile along with expectations. It may also open the wallets of other investor/operators. Ibrahimovic may be an outlier. It all depends on what he does this season. He’s off to a great start and he’s won everywhere he’s gone.

For now, its players like Josef Martinez (Atlanta United) and Felipe Gutierrez (Sporting Kansas City) who are scoring the goals with five each at this early stage of the season. The Uruguay-born Diego Rossi, who is only 20, has three goals and a league-leading four assists. Ibrahimovic may have the name recognition and storied past, but it’s these young players who can write the future success of their respective teams.

Prediction: Ibrahimovic is an outlier. This league is about young players.

Who will score the most goals this season?

In 2016, the league’s top scorer was New York Red Bulls striker Bradley Wright-Phillips with 24 goals. Last season, the Chicago Fire’s Nemanja Nikolic also finished first with 24. With that number as the target, there are several players who could finish atop the list.

Sporting Kansas City’s Felipe Gutierrez already has five goals. Although he’s gotten off to an incredible start, that form will likely level off in the coming weeks and months. That’s followed by a trio of players – Nikolic, Dominique Badji (Colorado Rapids), and Gyasi Zardes (Columbus Crew) – each with four goals.

No one should overlook Wright-Phillips and Ibrahimovic. These players are on their respective teams for the sole purpose of scoring. If both can stay healthy, they should be in contention for the league lead in goals. Ibrahimovic, for example, has scored 10-plus league goals in each of his last 11 seasons (the exception being the 2017-18 season). Only Lionel Messi and Cristiano Ronaldo can match that tally in Europe’s top five leagues.

In a league where defending is often shambolic, the idea that any team’s backline can help win the title appears laughable. It’s something that can happen given the great goalkeeping some teams possess.

While its defending has vastly improved over the past two seasons, this year could make for a record. It certainly helps to have a talented goalkeeper like Sean Johnson. He’s currently second overall behind Real Salt Lake’s Nick Rimando in the league with 21 saves in five games as well as two shutouts. NYCFC host RSL on Wednesday at Yankee Stadium in a battle between two of the league’s best goalkeepers of the moment.

Prediction: NYCFC will have a strong season – but falter in the playoffs.

Atlanta is second in the Eastern Conference but had the best point-per-game statistic going into this weekend: 2.25. The team remains undefeated at home (3-0-0) and has scored the most goals in the league at 13. Its 5-0 victory against LAFC on Saturday was another sign of its superiority.

Atlanta United, under the coaching genius of Gerardo “Tata” Martino, will certainly make the playoffs and anything can happen after that. The hype around this team makes sense, but hype doesn’t win trophies. For example, other teams, like the Red Bulls, have gotten praise in the past and fallen flat when it mattered most. Look for Atlanta to battle Toronto FC for the Supporters’ Shield for much of this season.

Another team to watch for is Minnesota United, last year’s other expansion side. Minnesota’s sophomore season in the league has started with some promise. The Loons can both battle Atlanta as well as grab a playoff spot in a Western Conference once again loaded with strong teams.

Prediction: Atlanta and Minnesota make the playoffs, but the Loons go out earlier.

How is LAFC doing and can it make the playoffs?

Speaking of the Western Conference and expansion, we present to you LAFC. This is a team that arguably got the most hype of any going into this season. The hype makes sense given the roster and the results, this weekend’s loss notwithstanding.

LAFC coach Bob Bradley does have experience molding success from a first-year club. He did so when the expansion Chicago Fire won MLS Cup in 1998. The league has changed a lot since that season. There are more teams and better players than there were 20 years ago. It means Bradley’s battle will be an uphill one, but he has a solid base of players to at least make the postseason.

It’s not all up to Bradley. He can only work with what he has at his disposal. Players like Carlos Vela, Omar Gaber, and Marcos Urena will need to have breakout seasons to get LAFC into the playoffs and beyond.