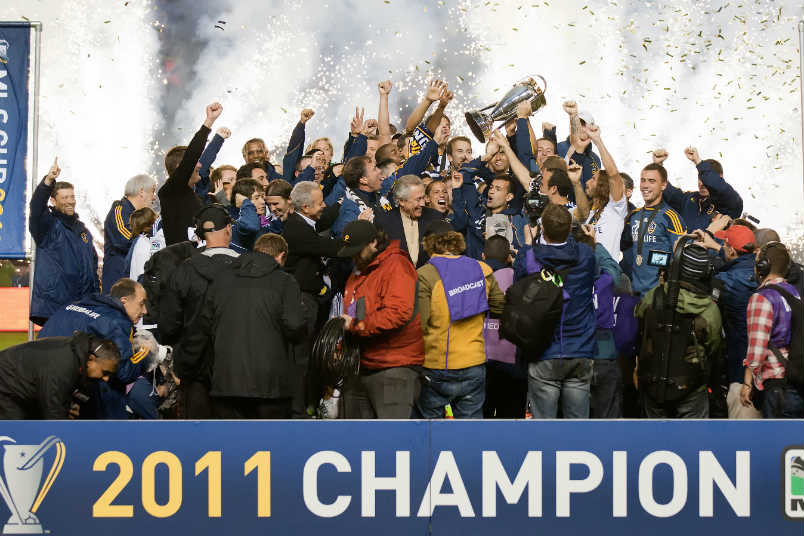 By Luis Bueno – RIVERSIDE, CA (Apr 11, 2018) US Soccer Players – Champions are by nature superior to the competition. Some champions become legendary and even others immortalized. The LA Galaxy teams that won consecutive MLS Cup championships earlier this decade had the look of immortals. The 2011 MLS Cup winners lead the conversation for the best team in MLS history. They did it again in 2012.

Six years after the Galaxy last hoisted that trophy, their status is in question. Toronto FC is now laying claim to that title.

The defending MLS champions now play for the Concacaf Champions League title. It’s been an impressive run, beating a pair of Liga MX sides. Those wins came despite playing the second-leg in Mexico in both series.

The Galaxy fancy themselves as the elite of MLS, the league’s only tenant in its upper echelon, but the Galaxy squandered the chance to lock up that unofficial moniker. The Galaxy crashed out of the 2011-12 Champions League ironically against Toronto FC, but that side was nowhere near the caliber and strength of the current version.

To be one of the all-time greats, success in all competitions is imperative. League success is a given, and the Galaxy had that. Proving it on the international stage? Back in 2011-12, the Galaxy dropped the ball in epic fashion. The Galaxy needed a late equalizer to rescue a 2-2 draw in Toronto for the first-leg and lost outright at home in the second. They lost 2-1 to a Toronto FC side that had finished the previous MLS season with 33 points from 34 games, less than half of the Galaxy’s 67 points.

Those Galaxy teams had a similar makeup to the 2017-18 Toronto FC squads. Flashy Europeans, USMNT stalwarts, an underrated goalkeeper that comes up with big saves when needed, and a solid no-frills defense. What those Galaxy teams had, at least in 2011, was a tougher road in CONCACAF. The Galaxy had to survive a difficult group stage just to get to the knockout rounds while this year’s tournament did not feature a group stage.

Still, facing a chance at history, the Galaxy came up short. The same situation existed then that exists for Toronto FC now. Both teams were in their preseason. Both teams had that same early-season rust. Toronto FC overcame that while the Galaxy could not and would not in future Champions League tournaments. The Galaxy crashed out of the tournament against Monterrey in the semifinals of the 2012-13 edition, against Tijuana the year after that, and against Santos Laguna in the 2015-16 version.

What makes this Toronto FC run more difficult for the Galaxy is that this kind of opportunity may never reach StubHub Center again. If Toronto FC wins the championship then the Galaxy cannot be the first MLS team to win a Concacaf Champions League. Both the Galaxy and DC United have a CONCACAF title to their credit, but those were two tournament editions ago in a format better suited to MLS sides. In this current format, playing decisive games in foreign countries, MLS teams have not yet lifted any silverware.

The Galaxy was the first MLS club to reach five MLS Cup trophies, as they’re happy to point out whenever an opportunity arises. The expectation was that if any MLS team was going to win the Champions League, it would be the Galaxy. Players and coaches recognized that back then when the opportunity was there for the taking.

Now, that chance to make MLS history belongs to Toronto FC. For the Galaxy, even qualifying for the Champions League seems like too much. The Galaxy made the wrong kind of history in 2017 with a pathetic showing in league, finishing in last place and winning just three home games. This season still has promise but the club’s 2-0 loss to Sporting KC on the weekend was a setback following a thrilling come-from-behind 4-3 win the week prior.

Making the Champions League normally requires a trophy. Just making the playoffs should be the goal for this season’s Galaxy.

Opportunities to do something special do not present themselves often. While Galaxy fans were a bit spoiled from 2009 through 2016, that kind of run is not the norm. The Galaxy reached four MLS Cups in that span, winning three, and made the postseason in each of those eight seasons. Wins were the expectation and championships were there for the taking.

Now, the league presents a much tougher challenge for the club. Home wins are not nearly as common as they once were. The mystique of StubHub Center is long gone. This team is still trying to find an identity and its way in this era of MLS.

Had any of the Galaxy teams from earlier this decade added the Champions League title, the club would have locked in that immortal title. That dynasty would stand as the league’s all-time greatest, setting a bar that would be difficult to top. It would certainly take more than one or two standout seasons. The Galaxy like DC United before them pushed against the idea that MLS was a league of no dynasties. Toronto is trying to show the same thing.

Should Toronto make it three in a row against Liga MX teams, they’ll set the new standard for MLS. That leaves the Galaxy looking back at wasted opportunities while watching another MLS club make history.