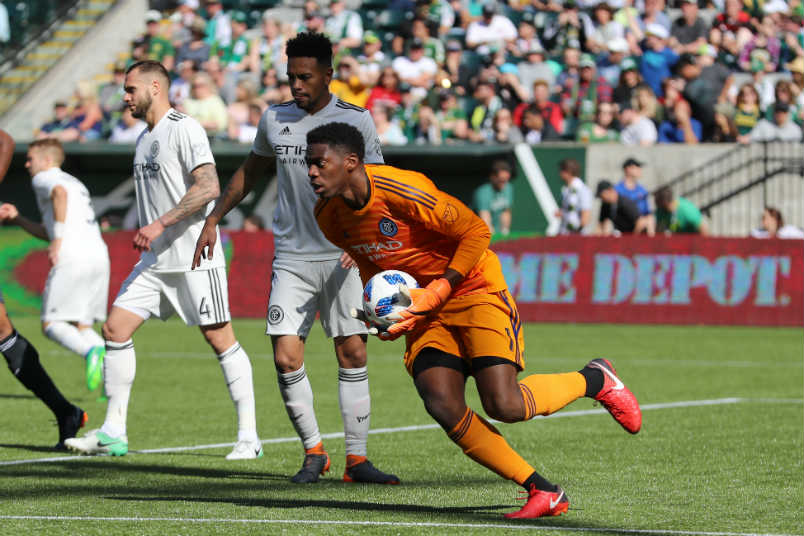 By Jeff Rueter – SAINT PAUL, MN (Apr 26, 2018) US Soccer Players – Last week, we looked at the growing conference imbalance in MLS. Due to population centers and ownership wealth, the Eastern Conference is quickly dwarfing the quality level of its more even-keeled Western neighbors. The Mississippi River has always been a convenient way to break the country up geographically. However, in a league that relies so heavily on recruiting foreign talent, bigger cities and more appealing destinations will always win out.

It wasn’t always this way, of course. In 2000-2001, MLS had a third table internally: the Central Division. Both seasons saw the Chicago Fire top the four-team allotment, besting the Columbus Crew, Dallas Burn, and Tampa Bay Mutiny. As the league prepared for further expansion, it made sense to have three regional divisions in the country.

Of course, life doesn’t always follow your best intentions, and both the Mutiny and the Miami Fusion folded following the 2001 campaign. As the expansion avalanche slowly started again in 2006 before snowballing out of control today, the league kept its East and West format. Additionally, it helped run an East v. West All-Star Game in 2004, between multiple iterations of the current MLS vs. Guest format.

However, as MLS prepares to add markets 24 and 25 with Miami and Nashville while remaining on the cusp of announcing a 26th team very, very likely to be Cincinnati, it may be time to reintroduce the Central Division.

Too big for the current schedule

In an ideal league format, each team will face off home and home to complete the league’s regular season. Once MLS solidified a 34 game slate, this ideal schedule was in place. Then NYCFC and Orlando City joined the fray. Then Atlanta and Minnesota, leading to teams playing each in-conference team twice, teams in the other conference once, and two at-large games to fill the 34 matches.

Now with LAFC leading to an odd number of teams, at least one team a week is on a bye. While that’s fine for the flow of play, it does begin to suggest that the polarity of a two-conference setup is no longer necessary. As the league jumps from 23 to 26 in the next two-to-three seasons, it won’t be possible to keep the same format.

For a league that’s adamant about retaining its playoff model, the unbalanced schedule is a non-issue. While having a league’s teams play the same teams the same number of times is a great way to ensure an even strength of schedule, the playoffs mostly nullify the rewards for mastering the regular season. Last season, Toronto FC was the first Supporters’ Shield winner to lift MLS Cup since the 2011 LA Galaxy. Even further, the previous five Shield winners failed to make the championship game entirely.

There’s little to reward winning the regular season. That means there’s less value in keeping things even before the playoffs begin.

There’s a increased likelihood that one of the expansion sides will join already in 2019 to bring the league back to an even number of teams. Whether that’s Nashville, Cincinnati, or a dark horse we don’t know. However, the next round of bidding for slots 27 and 28 is already underway, with markets like Detroit, Phoenix, and Sacramento all vying for what might be the final two seats in the most expensive game of musical chairs in soccer. Realistically though, why would MLS turn down ownership groups offering $200 million or more?

The three markets above all have their merits and would add to vital points of the country’s geography. It also means you could feasibly have three 9-team conferences with one of the troika picking up a tenth side. Assuming Detroit and Sacramento get in, it could look something like this:

Recent expansion has done a great job of adding the central third of the country to MLS. Realistically, there’s little reason for MLS not to jump to 30 teams. If you add Phoenix and figure out a way to get Saint Louis to open its arms to MLS, each conference has 10 teams. That makes scheduling far easier, and round numbers are never an unwelcome proposition. That said….

Why do we need conferences?

It may be time to embrace the open table. As MLS was a league fluctuating between 10-12 teams, it made sense to group them together to help foster rivalries. Once expansion became a healthy process, it made it easier to wedge the new teams into the existing league structure. As mentioned before, this came with a scheduling perk to make setting up the season’s slate far easier.

Now, MLS is close to surpassing the English Championship’s grouping of 24 teams. The second division league has its teams play each other twice (46 games in total) before their knockout playoff to decide the third promoted side. Unless MLS is planning on playing 54 games a year after hitting its 28 team threshold, something will have to give.

Assuming MLS keeps the playoffs capped at 12 sides, this would also help end the recent trend to reward subpar teams in weaker conferences with playoff berths. San Jose had a horrifying -21 goal differential but still snuck into the playoffs. This year, five of the league’s six best sides are indisputably in the East, leaving for a dogfight of average teams to fill out the West’s side of the bracket.

Instead, the twelve best teams each season would move onto the playoffs. It’s clear the postseason format isn’t going away any time soon. With an open table, MLS could firmly ensure that its sending its best representatives to the knockout stage.