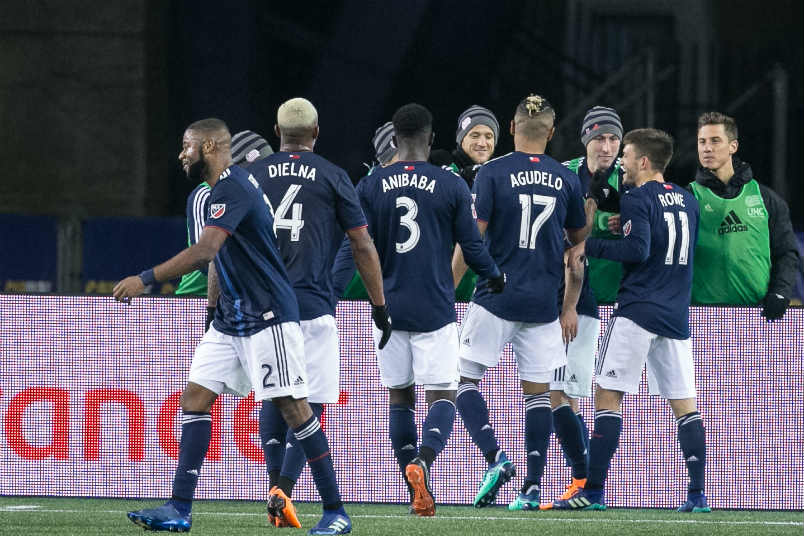 By Charles Boehm – WASHINGTON, DC (Apr 13, 2018) US Soccer Players - The New England Revolution’s academy is not generally known as one of the pacesetters in MLS or US youth soccer. To date, the MLS team has signed four Homegrown Players in total. The Revs’ youth sides rarely keep pace results-wise with elite academy programs like FC Dallas, the LA Galaxy, and New York Red Bulls.

However, this week the Revolution turned a few heads across the youth scene with the announcement of two new initiatives. The intent is to connect with a wider cross-section of the sprawling New England soccer scene and raise the level of both the club and its community. It might even prove to be a milestone marker for the country as a whole, and from an unexpected source.

On one front, New England will crank up talent development programs in mostly urban areas in and around Boston. Aiming to build bridges in underserved communities where poverty and lack of access are a one-two punch to aspiring young talent, these no-cost “Regional Development Schools” are a means to give those players exposure in front of Revs coaches as well as high-level training environments.

The second prong is a new scholarship program for the Revolution’s youth affiliate clubs, or “Academy Alliance Partners.” This will award grants to those clubs that develop players who go on to sign Homegrown deals with the Revs. That's both tangible and symbolic for those who lay the critical groundwork for growing future pros.

The first scholarship goes to Bayside FC, a Rhode Island club that was the home of US youth international midfielder Isaac Angking for several years before he joined New England’s academy, eventually signing a Homegrown deal in January.

"Our alliance partnerships have allowed us to cast a wider net to identify and begin the development process for players at a younger age,” said Revs youth development director Bryan Scales in a club release. “Moving forward, we want the scholarship to reward clubs like Bayside FC for their successes and support their future development efforts.”

It’s far too early to know just how significant this will be in practice. Still, I expect others around North America will watch the Revs with renewed interest to see if they are on to something. With conflict, anger and miscommunication the dominant themes on the elite youth landscape at present, anything remotely resembling an olive branch is a welcome development.

The Revs have their own self-interest in mind here, of course. Situated in a soccer-mad region with an overall population of around 15 million, nearly five million in the Boston metro area alone, the franchise has scarcely scratched the surface of its youth development potential. So anything that grows their brand and puts them in overlooked areas stands to benefit them sooner or later. Parent company Kraft Sports Group’s inability or unwillingness to invest significantly in youth to this point has left the Revolution well behind the pace even compared to new MLS arrivals like Atlanta United.

Yes, a $10,000 scholarship pales in comparison to the five- and six-figure sums that youth clubs around the world who nurture top talent can collect via the training compensation/solidarity payment framework which US Soccer refuses to allow here. By way of comparison, media outlets calculate that if the US followed the relevant FIFA regulations, Crossfire Premier, DeAndre Yedlin’s youth club, would be due around $60,000 in solidarity payment from Tottenham Hotspur after the English club paid the Seattle Sounders a reported $3.7 million transfer fee for the fullback in 2015.

I’ve talked to many people at many levels of American soccer about the solidarity payments/training compensation issue over the past few years. There’s little in the way of consensus about whether the global system will ever happen in this country, or even if it’s feasible to attempt to do so given our uniquely quirky soccer environment.

Some believe strongly that it would swiftly transform our development pathways for the better. Others predict that it would only worsen the already-convoluted road abroad for aspiring players. Or that it would inflame the turf wars that plague US youth soccer. Or it would drain MLS’s coffers with limited return on investment on the field. Many believe a third way is the most realistic option. The adaptation of a customized process through cooperation with FIFA, US Soccer, MLS, and youth stakeholders.

Legal action by Crossfire and several other youth clubs rumbles on and may not reach a resolution for months or years to come. In general MLS and US Soccer have thus far made only tentative gestures towards compromise, and mostly behind closed doors. Meanwhile, many youth clubs and coaches simmer with frustration and even rage at what they see as an unfair, unbalanced status quo.

Over the past decade, federation staffers have built the Development Academy hand in hand with MLS, often providing the pro league’s teams with preferential or even exclusive status as the predominant pro academies within their markets. The main idea is to create economies of scale across the system so that the best players compete with and against one another from coast to coast.

In short, that means consolidation, “fishing by net,” as one youth coach memorably dubbed it. Whether actively or implicitly, the best players normally move to the biggest clubs, even if doing so deprives non-pro clubs of talent they may have played a major role in cultivating. Small-market MLS teams already have sweeping “Homegrown territories” granted by the league. That gives those MLS clubs right of first refusal on top prospects, with limited regard or acknowledgment for smaller clubs.

In theory you can see the appeal of that approach in a country of 325 million people. In practice, though, in the absence of a widely-respected overarching natural order, it has in many cases poured salt on festering wounds.

What we have is a dog-eat-dog youth environment where players, coaches, and even teams are prone to turning mercenary in the pursuit of their self-interest. Wins and losses still carry excessive weight compared to actually growing elite talent that can help the pro leagues and national teams. MLS organizations with shallow roots in their home communities have a limited window in which to prove that their academy merits its place atop the regional pyramid. Some have found themselves in opposition to the very youth clubs they need as partners if they are to make the most of their backyard talent. At times coaches and agents direct blue-chip kids away from their local pro team entirely.

Under Sunil Gulati’s presidency, the US Soccer Federation approached this complex issue as a can of worms to keep a lid on, rather than an area of underutilized potential. Some of us still hold out hope for a comprehensive solution delivered by the American game’s leaders. In the meantime, any sincere attempts by the Revolution and others to patch up the gaps and grudges deserve our attention, and hopefully, our praise.