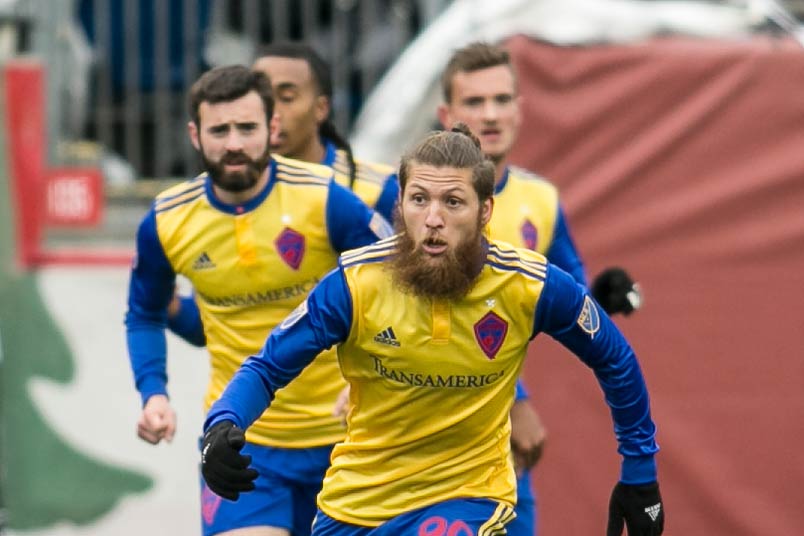 By Jason Davis – WASHINGTON DC (May 23, 2018) US Soccer Players – MLS carries with it a sort of institutional hierarchy. The league’s modern explosion of supporter-driven passion, big crowds, and accelerating spending means that for most, the first things that spring to mind are new.

It’s the atmosphere at Mercedes-Benz Stadium and the play of Atlanta United with its cadre of South Americans. The SoCal chic of LAFC backed the power of celebrity in a shiny new venue. The zeal of Orlando City’s purple-clad patrons and the home they helped will into existence. The excitement of the expansion process in places like Nashville and Miami. Toronto FC and its game-changing team building and dominant 2017 might be next.

Down a level sit the Red Bulls, the Sounders, the Galaxy and their drama, DC United’s almost-finished new home, academy stories and club philosophies, various club struggles for relevance and on-field success (New England, Chicago, FC Dallas, etc.), and on the decidedly negative side, the story of the Columbus Crew and the possibility of relocation.

Only after all of that, and only with a great deal of effort, does anyone come close to sparing a thought for the Colorado Rapids. The Rapids are the club that time, and most MLS fans, forgot at least until they show up on the schedule. Then, the assumption is that there are three winnable points available.

The Rapids are bad, again. Saved from the bottom of the barrel in 2017 only by the supreme disaster that was the LA Galaxy season, Colorado is again looking at a double-digit finish. Through 10 games the club sits in last place in the Western Conference with eight points and has the League’s second-worst points-per-game return. Only Seattle has fewer goals to this point. The Rapids possess the ball less than anyone in the league. They have conceded more shots per game than all but two teams.

All of this is happening with a new head coach at the helm. Rapids management made it clear they wanted to make a change from Pablo Mastroeni following the 2017 season. After fielding what the club portrayed as a bevy of applications, Colorado decided to hand the reins to former New Zealand head coach Anthony Hudson. At the time of his hiring, the club portrayed Hudson as an up-and-coming young coach with a bright future who saw promise in the Rapids’ project.

Hudson’s positive qualities haven’t translated into results for the Rapids. On paper, the Rapids spend more than enough to compete. Far from the most parsimonious team in MLS, Colorado dropped significant funds on a number of players over the last two seasons.

The problem is that allocation of those resources to those players isn’t paying off. A drop in form and a disconnect with Hudson’s direct, physical approach means the Rapids are playing the same sort of soccer that helped them reach the MLS Cup playoffs under Mastroeni in 2015 but getting nothing approaching the same results.

Let’s not forget that the Rapids are one of several professional outfits owned or controlled by Stan Kroenke and his family. Kroenke has interests in the NFL, NBA, NHL, and two minor sports leagues in the United States. He is also the majority shareholder at Arsenal Football Club, with the Premier League team undergoing a coaching change of its own.

In MLS, the Rapids benefited from an effective style of play and the influence of MLS parity. That managed to keep Colorado competitive. Now that they’re not, it’s the pressure for results familiar to any soccer club. Specifically to MLS, it’s playing keep up with the latest generation of clubs.

The Rapids play that game at a disadvantage. Like so many of the league’s original franchises, the Rapids suffer from a deep-seated malaise around their name in their home market. A series of poor branding decisions and the move away from Denver to Commerce City put the Rapids squarely in the “afterthought” category in the local sports market.

It’s not unique to Colorado, but there’s also not much of a template to follow for suburban MLS clubs. The location of the stadium need not be a fatal problem if there is a real commitment to making the team matter. The Sporting Kansas City rebuild keyed on a stadium location that was familiar next to the speedway, but not in the core of the city. The current version of MLS stresses prime real estate, but that’s a choice not a necessity.

How a full revamp might look for Colorado is an open question. Given the restrictions still in place in a single-entity league, it’s not as simple as a series of best practices learned from Arsenal near the top of the Premier League. It’s also probably not going to come from the other teams in Kroenke Sports holdings. They own the NBA’s Denver Nuggets and the NHL’s Colorado Avalanche as well.

That might suggest that figuring out the Major League Soccer problem isn’t necessarily a priority. That hasn’t shown in spending and statements of intent from the team’s management. Writing for MLSsoccer.com, Bobby Warshaw highlighted the spending while asking what are now familiar questions for the Rapids.

No MLS team wants to be the model for how spending might not work in this league. MLS parity is still in place. Teams can still salvage a season late. They can also drift.

The Rapids aren’t keeping up with the rest of MLS. Addressing that isn’t easy. This isn’t a new scenario in this league, but it’s the expectation that the Colorado Rapids should be doing better. Right now.