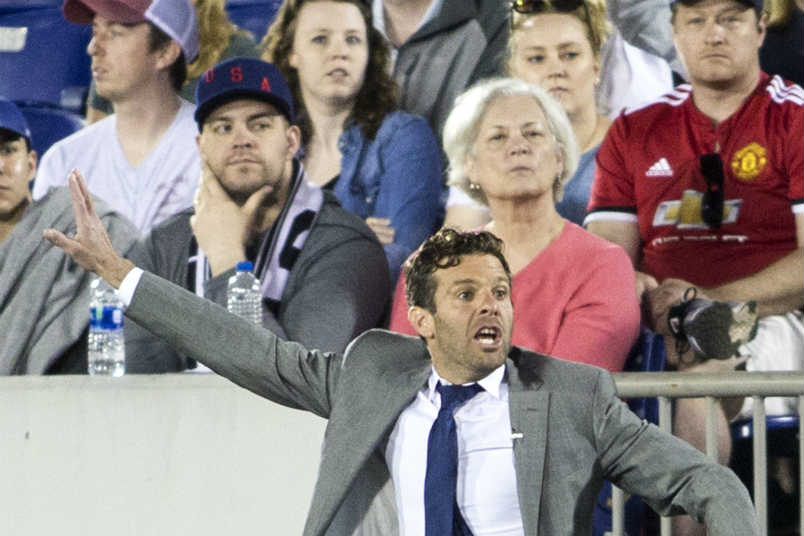 By Jason Davis – WASHINGTON DC (May 11, 2018) US Soccer Players – How do you solve a problem like suffering from a lack of mainstream attention in your home market despite being one of the most successful clubs in MLS history?

How do you solve a problem like catching up to your competition quickly when you’ve spent the better part of the last decade spending as little money on your product as possible because of a debilitating stadium lease?

How do you solve a problem like DC United?

As the original MLS dynasty embarks on a new era come July with the opening of Audi Field, those questions loom large. For a club that missed out on much of the awkward adolescence of MLS, growing up might be painful.

Reports from England say the club is currently emis negotiating with former Manchester United great and current Everton striker Wayne Rooney. Whether or not the transfer happens in time to bring Rooney over in the summer window, the pursuit of Rooney speaks to the choice United is making as it tries to leap forward into the modern era of Major League Soccer. There’s enough fire to the smoke of rumors to clearly indicate United’s thinking.

Consider DC United’s existence over the past decade. While other MLS teams were dipping their toes into the Designated Player waters and opening new purpose-built venues, the franchise that won three of the first four MLS Cups and helped launch supporter culture with the advent of groups like La Barra Brava and the Screaming Eagles languished in the money-sucking confines of crumbling RFK Stadium.

None of the team’s owners over the last ten years were willing to spend the kind of money necessary to keep the Black & Red in the elite of MLS. The amount of red ink that defaced the club’s ledger at the end of each season ensured that while the rest of the league was moving forward, DC United stayed stuck in neutral.

United didn’t bother with the evolution that took place during the MLS 2.0 era. As Audi Field’s opening draws near, things will change. DC seems set on signing a big European star who’s best years are in the past. That’s a move that seems a better fit for the MLS of 2010 than of 2018.

This is the simpler path for United, regardless of its ultimate success. The flashy move featuring the world famous name is certain (as it already has, in rumor form) to get people who otherwise ignore the team talking about DC United. Anecdotal evidence suggests that United got more mentions in casual conversation and drew more attention from local personalities in Washington sports media on Thursday than at any other point in recent history. Not since Freddy Adu signed with the club as a 14-year old in 2004 have people outside of the usual soccer circles gone out of their way to talk about the club.

As depressing as that reality may be, it certainly explains the thinking for United. The other path, the more difficult one, involves spending money on younger, lesser-known players who could help over a longer period but might not garner attention in the short term. United is fighting against a history of irrelevance in Washington that clubs like Atlanta and Orlando never faced. Firmly established as the region’s “other” professional sports franchise, United clawing its way to a respectable place among the NFL, NBA, MLB, and NHL teams in a very crowded sports market means overcoming the perception created by their time in RFK Stadium and the decision to pass on the designated player revolution.

For soccer purists, a big name over-the-hill European signing makes little sense. Even if a player like Rooney has some success after moving to MLS, one player won’t fix what ails DC United. If the club wants to get back to its winning ways, the smarter course is to follow the trend of mining South American talent and investing heavily in academy programs.

The image of United as a poorly run team isn’t helped by the fact it looks primed to drop millions on one over-30 player while at the same time still charging many of its academy players. Things can change. The spending probably isn’t a zero-sum game. However, until the club makes moves that point to longer term thinking, fans will be right to have concerns.

Despite the damage done to the United brand in DC and the erosion of a fan base once thought to be the best in the MLS, United does have a core group of fans who will happily support the team if the team moves in the right direction both on and off the field. The danger is splashy moves for older players is that it sends the message that United either doesn’t trust those fans to understand competent team-building or takes them for granted.

Either one is a very bad look. Even if additional moves are in the offing and the club is planning an overhaul, the first impression of its new money age will be difficult to overcome. Fans who have been waiting for years to see United finally step out into the light and have a real chance to catch up to everyone else won’t see this as encouraging.

Are potential new fans worth more than the communities that have been around since the beginning? That’s the context for DC United’s decisions. Whatever faith United has left among fans of the club who go all the way back to 1996 turns in part on what United does next.

The buzz created by Audi Field will wear off quickly, leaving the club with only one way to hold on to the momentum. Splashy signings can be part of the process, but the club must also do plenty more. That’s the answer to the question. How do you solve a problem like DC United? By winning.