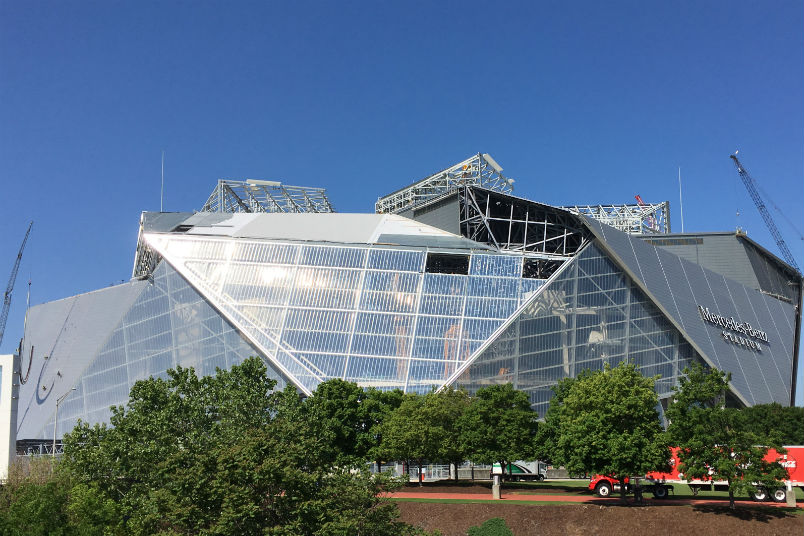 By Clemente Lisi – NEW YORK, NY (May 21, 2018) US Soccer Players – MLS attendance has always been about looking at the bright side, especially in the league’s first decade. Seeing the glass half full has served the league well over the years. Boosters point to the fact that MLS now has a league-wide average that tops both the NBA and NHL. Despite that glowing talking point, there’s more to any assertion when you’re dealing with statistics.

With the season a third of the way through, the league has averaged a healthy 20,809 fans per game. Before getting into why teams are drawing well this season, it’s worth a look back at history.

MLS has seen attendance go up every year since 2014. In the league’s first season in 1996, it averaged 17,406 fans. Last season, Atlanta United, in its first season of existence, led the regular season with an average of 48,200. Those numbers rivaled Seattle , the team that had previously led the league, who finished at 43,666. In third was Toronto FC, who went on to win MLS Cup, at 27,647. Of course, there are fewer games played in MLS compared to both the NBA and NHL. Even league averages don’t mean much without a broader context.

It’s the same order thus far this season. Fans in Atlanta continue to flock to games. Seattle hasn’t lost much of its allure despite what has been a bad start to the season. Toronto, meanwhile, is fresh off finishing runners-up in the Concacaf Champions League where it averaged 28,108 fans in that competition.

There’s a reason why Atlanta and Seattle are one-two in the league. In addition to the frenzy these clubs have created in their markets, both teams play in large stadiums. Atlanta United has Mercedes-Benz Stadium, a multi-purpose venue that houses the NFL’s Falcons. For United, they reduce capacity to 42,500 seats but it can and does hold up to 72,035 when needed. Seattle at CenturyLink Park holds 40,000 for MLS and 69,000 for NFL games. Until Atlanta came along, Seattle had been the envy of every team in the league. Both Atlanta and Seattle also have ownership groups/investors who have a stake in both soccer and NFL franchises.

Speaking to The New York Times Ken Belson, MLS Commissioner Don Garber revealed he had questioned the wisdom of playing in an NFL stadium. Ultimately, he deferred to Atlanta United FC owner Arthur Blank who reassured him the city would embrace the team.

“Atlanta had a reputation for transient folks from other places who didn’t connect with any one thing except college football,” Garber said. “The size of the stadium caused us concern, but Arthur kept saying, ‘I will fill the stadium.’ The fact that it was downtown was what put us over the finish line.”

Playing in large venues has allowed both Atlanta and Seattle to meet growing demand for tickets. If they can sell over their listed capacity, the seating is there. Meanwhile, most of the league embraced soccer-specificity. Those stadiums can’t come close to matching Atlanta or Seattle’s soccer capacity.

That has had MLS rethinking the entire soccer-specific model that emerged soon after the league got started. It was a time when games played out in mostly cavernous NFL stadiums, something the MetroStars experienced for years at Giants Stadium, the Crew at Ohio Stadium, and the Galaxy at the Rose Bowl. As MLS evolved, the building of stadiums allowed teams to control revenue as well as create a better game-day atmosphere.

“The good thing about being new and trying to figure it out as you go along is you have a specific plan and then there are times when you have to modify that plan,” Garber told The Orlando Sentinel’s Alicia DelGallo last year. “I think good business leaders and good businesses… don’t just get stuck in their previous strategies but try to evolve and see how things develop.”

The NFL stadium model hasn’t worked for everyone. The New England Revolution playing in Gillette Stadium, ranked 21st in attendance out of 23 teams this season, has averaged just 14,118 fans this season. In 2017, the Revs ranked 14th out of 22 with a little under 20,000. New York City FC, who play in less-than-ideal conditions at Yankee Stadium during the baseball season, was fifth overall last season with 22,643 and are currently 8th with an average of 21,381.

As far back as 2011 critics called on the league to limit the building of soccer-specific stadiums. In an article that year for Bleacher Report, Morgan Wick wrote: “But by setting the ideal size of a soccer-specific stadium at around 20,000, MLS was effectively accepting that the popularity of the league would never exceed that level – and that its fans would never reach the number, and the game-day experience would never achieve the quality, seen in Europe. Twenty thousand isn’t ‘normal’ in the Premier League – that’s the size of its current smallest stadium. And there are only five MLS venues, one of them only barely, with larger capacities than that of Wigan’s home stadium, the third-smallest in the EPL. The league’s top teams don’t seem to have a problem playing in stadiums with over 40,000 capacity.”

At the same time, fielding a bad team doesn’t always mean poor attendance. While it did for DC United, Colorado, and FC Dallas in 2017, the team with the worst record last season was the LA Galaxy. Nonetheless, the team ranked sixth in the league in attendance with an average of 22,246. This season, with the team also playing inconsistently but gaining a much-needed boost after the signing of Zlatan Ibrahimovic, is fourth overall in attendance with a little over 26,000 fans per match.

There still is a disconnect, meanwhile, between the live game experience and fans watching on TV. While MLS attendance is on par with that of some of the best leagues in the world, national television ratings averaged under 300,000. That’s fewer than the average for a New York Yankees game on YES Network, the team’s regional sports network.

A great case study is the expansion LAFC. The team and YouTube TV were about to close on a jersey sponsorship deal when MLS executives introduced a plan to add the team’s local media rights to the deal. For a team that had not gotten lots of interest from regional sports networks, this was a chance to appeal to younger audiences who’ve cut the cable cord. The three-year, $18 million is the first of its kind. It could serve as a template for other MLS teams and in other leagues. The Chicago Fire and ESPN+, the network’s streaming service later signed a similar deal.

While MLS teams have not seen fans flock to their TVs to watch games, they have come to the stadium gates to witness games in person. That means this is a product they like and are willing to spend their time and money on. Still, this is an era when Americans have other distractions competing for their time as soccer has slowly become part of American sports culture. That’s something MLS needs to keep working at in the years to come.