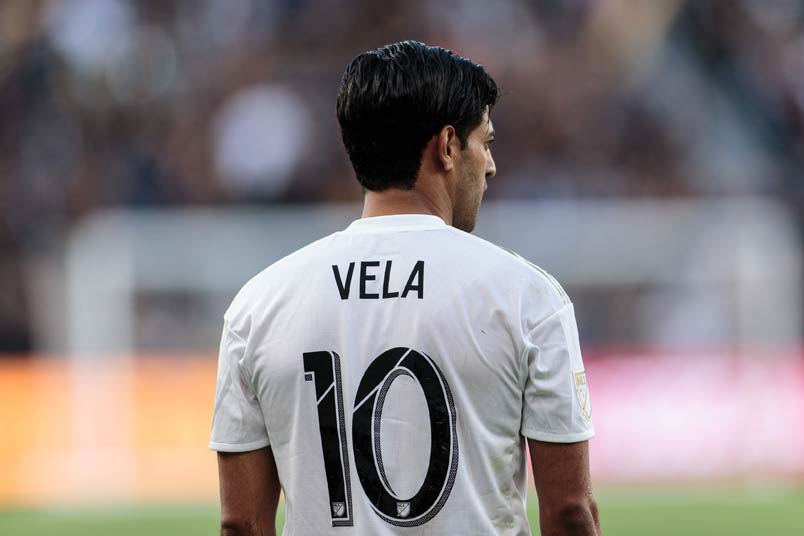 By Luis Bueno – RIVERSIDE, CA (May 16, 2018) US Soccer Players – Major League Soccer and Mexico’s World Cup rosters have had little to do with one another over the years. In the coming weeks that history could change three times over.

Three MLS players are part of Mexico’s 28-man provisional World Cup 2018 roster. Health permitting, all of them stand to survive the cuts once manager Juan Carlos Osorio pares down the number to 23. Only one MLS player, Claudio Suarez in 2006, has been part of a Mexico World Cup team before.

LAFC’s Carlos Vela and brothers Jonathan and Giovani Dos Santos from the LA Galaxy stand to triple that figure come June 17 when El Tri lines up for its World Cup opener against Germany.

That relationship though does not exactly excite many Mexico observers. In fact, it is the source of criticism for the selection of at least two of the players on the list. It’s something many naysayers point to as the reason to omit players rather than include them.

Still, this inclusion on the preliminary list and potential for participation in the World Cup will only progress and help develop MLS and Mexico’s odd history with one another. Many Mexico national team and Liga MX supporters have never warmed up to MLS despite the league’s decades-long efforts to win them over.

Clearly, times have changed. To have three potential Mexico World Cup players on MLS rosters speaks not only to the money that MLS teams have to spend on players still in their prime but also the respect such players have for the league, its clubs, and the level of play and competition that exists here.

That has not stopped the criticism that exists for the Dos Santos brothers in particular. The once-loved duo is no longer an affable pairing. Simply pointing to their club as a means for exclusion is not fair to them or anyone else who plays or could potentially play for Mexico. In fact, each case is different and has its own intricacies.

Giovani Dos Santos is an enigma, nothing new over his career. The one thing that he could count on was the support of Mexico fans. That support has waned drastically. Since his decision to join the Galaxy in the summer of 2015, Dos Santos has faced criticism for not staying in Europe and playing at a supposed higher level of play. That criticism has grown louder after the poor season Dos Santos turned in a year ago, scoring a meager six goals for the last-place Galaxy.

Yet, there are few players on the Mexico squad with his credentials. At 29 years of age, Dos Santos has won a U-17 World Cup, an Olympic Gold Medal, three CONCACAF Gold Cup titles, has played in two World Cups, and has more than 100 caps.

Critics now throw brother Jonathan in with Giovani, also for coming to the Galaxy. Jonathan has been in MLS for a much shorter amount of time and has not had the opportunity to show his true value to the league.

Injuries have been hampering both brothers. Giovani has a nagging hamstring injury while Jonathan has missed time with that as well. Jonathan left Saturday’s match against FC Dallas with a thigh issue.

Injuries happen everywhere in the world, and that is not something that relates solely to MLS. The two players have shown enough over their careers to warrant a World Cup spot. Neither is in top form. With some time to gel with the squad, the two should be fine additions to El Tri.

Vela meanwhile has not faced as much criticism as his Tricolor counterparts despite playing in the same league and the same city. Vela’s team though is much better off than the Galaxy as LAFC sits in 2nd-place in the Western Conference. Vela has shown nothing except stellar play since joining MLS. He’s for third in the league with six goals through 10 games.

Still, critics disliked the Vela-to-LAFC move. Vela was with Real Sociedad in La Liga. While that was in a stronger league than MLS, Vela’s production and playing time had dipped before opting to move stateside.

MLS’s supposed lack of strength and competition has not hurt Vela though. He has won over teammates at LAFC with his approach to the game and how he carries himself on and off the field. LAFC is very competitive this season as the club is playing at a high level. Vela’s rhythm and regular play (he has played every minute of every game this season) gives Osorio what most onlookers demand from players coming into the World Cup. He’s an on-form player who is at peak fitness.

WHAT MAY HAVE BEEN

Andres Guardado and Javier “Chicharito” Hernandez were each linked to MLS clubs over the last year. Both reportedly opted to say in Europe to maintain a high level of play and fitness ahead of the World Cup. Guardado’s link was with Atlanta while LAFC was keen to land Hernandez. Maybe both of them would’ve been better off in MLS.

Guardado did get regular minutes with Real Betis but picked up an injury to his leg a month ago, he told reporters and requires surgery. Although he reassured reporters that the surgery was minor and he would return to full training in less than two weeks, the issue remains.

Hernandez meanwhile suffered through a poor season with West Ham United. While Hernandez played in 28 games this season, he saw 90 minutes only three times since October. While the competition in England is stronger than it is in MLS, playing regularly and getting into a rhythm the way Vela has is invaluable.

There is hope though that more Mexican national team players will look to MLS as a viable option for their respective club careers. If three players can make Mexico’s World Cup roster while playing in MLS, that will speak to the strength and value the league now has despite what the critics say.