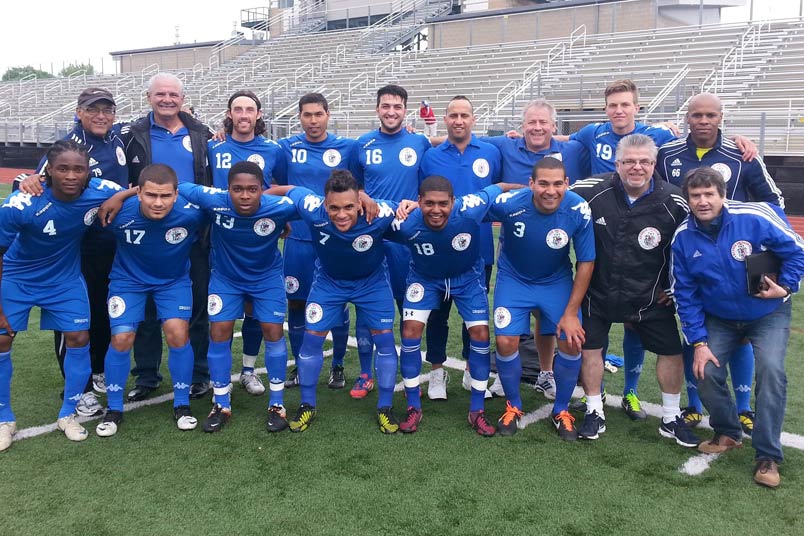 By Clemente Lisi – NEW YORK, NY (May 28, 2018) US Soccer Players – Before the game went mainstream in the 1970s and a national pro league became a reality, soccer was still thought of as an “ethnic sport” played by immigrants. While that was mostly true, what emerged were a series of clubs located in major cities that featured some of the world’s best players.

If the ancient Greeks invented the Olympics, modern-day ones preferred soccer and brought the love for the game to the US. The New York Greek-American Atlas Astoria Soccer Club remains a testament to the love for the game and one of the most successful in American soccer history. The team still plays its home games at the historic Met Oval in the New York borough of Queens.

“They are a piece of Hellenic history,” said Stavros Zomopoulous, who coached the team to a United States National Amateur Cup championship in 2013. “(They are) the oldest Greek immigrant team in the world.”

Among those talented players was Greek international Alkis Panagoulias, who played for the club from 1962 to 1967 before coaching them to their first three US Open Cup titles. Panagoulias eventually left the club in 1971 and later coached Greece at senior level from 1973 to 1981. After a stint as manager at Olympiakos, Panagoulias became US National Team head coach from 1983 to 1985. He coached Greece for a second time in his career at the 1994 World Cup that took place in the United States.

It was during Panagoulias’ time as USMNT coach that he struggled most to succeed. The USMNT entered the NASL for the 1983 season, the Team America year designed as preparation for the 1984 Olympics and 1986 World Cup qualifying. The experiment was largely a failure and lasted only one season.

“It was very difficult,” Panagoulias told The New York Times in a 2006 interview. “I first had to sell the league people and owners on the idea that the National Team has to be the No. 1 team in the country. We needed their players. I was almost crying when I talked about the National Team. They looked at me like I was crazy.”

The Greek Americans, however, had earned lots of honors throughout the 1960s. At Greek Americans, one of Panagoulias’ best players included defensive midfielder Lolos Hasekidis, who went on to play for the New York Cosmos, and former Panathinaikos striker John Kosmides. The Greek Americans would win three straight US Open Cups from 1967 to ’69, adding a fourth in 1974. Along with the Seattle Sounders, they’re the only teams to pull off an Open Cup three-peat.

The Greek-Americans’ brilliant run started by defeating Orange County in the ’67 final 4-2 with Kosmides coming off the bench and scoring two goals to lift them to victory. Striker Bob Haztos, another former Panathinaikos player, netted the winning goal in the second leg of the 1968 final win against Chicago Olympic. The 2-1 aggregate win gave the team a second straight title. The third title came in dramatic fashion in 1969 as striker Dennis Nanos, who had scored in the two previous finals, netted the decisive 90th minute goal in the club’s 1-0 victory against Montebello Armenians based in Los Angeles.

Five years later and with a new generation of players, they won a fourth title in 1974. Roberto Illenes and Tibor Vigh scored in a 2-0 win over Chicago’s Croatian SC. Although that was the last time the club won the US Open Cup, it remains a force in New York soccer. The team currently plays in the fifth-tier USASA’s Cosmopolitan Soccer League, winning five of the last 11 Eastern New York Championships. While the club had not qualified for the US Open Cup since 2005, it returned to the tournament as recently as 2012. It last competed in the tournament in 2014.

“Recruiting in (the New York City) area isn’t a problem,” said Zomopoulous. “We have enough exceptional talent that, if the Cosmopolitan Soccer League formed an all-star team, it would win the USL-Pro. And being a top side, offering a chance to compete for national honors and the US Open Cup, it sells itself.”

Like many ethnic clubs, the Greek Americans have lost most of its ethnic flavor. The team features a diverse roster unlike the all-Greek sides of the 1960s. It represents the multi-ethnic nature of New York and the love for the game from around the world.

“The goal remains to be one of the top amateur sides in the country,” Zomopoulous said, “and represent the community in the world of soccer.”