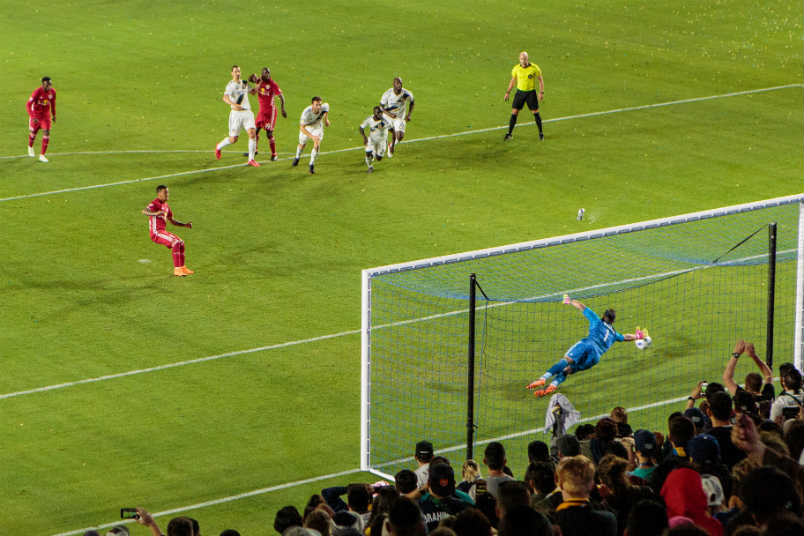 By Luis Bueno – RIVERSIDE, CA (May 9, 2018) US Soccer Players – Between the 2017 and 2018 MLS seasons, the LA Galaxy made sweeping changes. The club shed itself of more than a dozen players and brought in reinforcements across all lines, from new goalkeeper David Bingham to forward Ola Kamara and every position in between. The topper to that, of course, was Zlatan Ibrahimovic, whose arrival energized Major League Soccer and seemed to signal that the Galaxy’s swashbuckling days of yore were back.

Nearly one-third of the way into the 2018 campaign, something certainly is back. But it is not the dominant days from early this decade.

On paper, the Galaxy’s 2018 season closely resembles its 2017 campaign, which hardly inspires any confidence. The Galaxy has lost three consecutive matches and has just one win since March.

While anything can happen in MLS, it may already be time to start thinking about what comes next for the Galaxy. While this might seem like a recurring them, it wasn’t that long ago when it was LA getting the better of LAFC. Now? Setting the club up for not just a successful next season but building the right foundation is key. What does that mean for the short-term? This is still MLS.

Reaching the playoffs this season might still be in the mix for the Galaxy. Their 3-5-1 record is good for 10 points, tying them for 8th-place through the first weekend in May. The club has scored an unimpressive 12 goals while the backline leaks them, having allowed 16 goals. Only Montreal and Real Salt Lake have allowed more.

A year ago, the Galaxy’s record was 2-5-2 after nine games, scoring 10 goals and allowing 15. Then and now, the Galaxy had two shutouts.

What’s troubling though is the club’s lack of success at home. The Galaxy had a record-low three home wins in 2017, turning the script completely around from the club’s old dominant home record. This year, the club started off with two consecutive home wins, including a dramatic 4-3 win over newcomers LAFC. Since then, the Galaxy has lost all three games it has played at home, dropping contests to Sporting KC, Atlanta United, and the New York Red Bulls by a combined 7-2.

The statistics are all an accurate reflection of what happens during matches. The Galaxy is not functioning well, and it shows. At least on paper, though, the personnel is vastly improved from a year ago. The team has depth, particularly in the midfield, and is not having to play players out of position like last year.

However, the team is thus far not very creative. The Galaxy is scoring goals mainly off counterattacks and is not able to maintain possession and create chances off of that regularly. Both goals against Houston on the weekend came off counterattacks. And while it is good to be dangerous in the open field, it is a strategy that works mostly when there is a solid defense to keep opponents honest.

The Galaxy’s defense is far from solid. The backline seemed solid entering into the season, with newcomers Rolf Feltscher and Jorgen Skjelvik coming in to help out Ashely Cole and Michael Ciani. Feltscher is out four months with an injury, putting more strain on the already struggling unit.

Players are all still trying to figure out what tactics the team is using with Ibrahimovic around. The team’s 4-2-3-1 formation has molded a bit to a 4-4-2. That’s fine, but the team’s preseason featured tactical work with the 4-2-3-1 formation.

Injuries have also hampered the club a bit as both Gio and Jonathan Dos Santos have missed games due to injury. The World Cup could mean additional missed games for both. Saturday’s match at FC Dallas may be the players’ last game with the Galaxy until July.

There does seem to be some reason for optimism though. Ibrahimovic has been strong since he arrived. He’s been part of every Galaxy goal since making his MLS debut on March 31. If coach Sigi Schmid can figure out the lineup around him, Ibrahimovic’s production could even rise.

Gio Dos Santos has two goals in his last two games and this season overall. Dos Santos had just six in 2017 and is on pace to surpass that figure even if he misses time for the World Cup. Perhaps he’s using the extra motivation of trying to make the World Cup roster. Regardless, his play has been stronger this season.

The Galaxy has the top spot in the league’s allocation table, which could mean something directly or as a tradable asset this summer. Still, there are more reasons to fear what lies ahead this season than there are to expect a turnaround. The Galaxy’s offseason of change has set up a spring of frustration and a painful summer could be right around the corner.

Another loss or two this month and it might almost be time to revamp the roster during the summer and prepare for 2019. At least then there would be no false hopes of quick success like there is now.