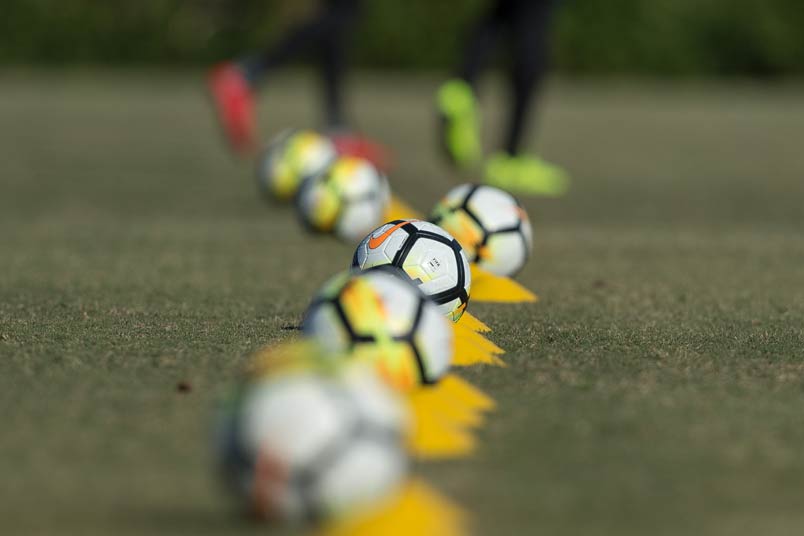 By Charles Boehm – WASHINGTON, DC (Jun 1, 2018) US Soccer Players – For generations, US soccer players and fans have been venturing abroad in search of work, adventure, and improvement in the beautiful game. American coaches, however, have generally been slower to pursue careers and livelihoods overseas, for various reasons.

Todd Beane is a prominent exception. After playing at the NCAA and USISL levels in the 1980s and ‘90s, he became a discipline of the legendary Johan Cruyff. Beane eventually married the Dutch master’s daughter Chantal. He relocated to Barcelona working as a coach, educator, and advisor for Cruyff’s institute and foundation. He and his wife built and currently operate TOVO Academy, a soccer school based on Cruyff’s “Total Football” philosophies.

In the wake of my piece about US Soccer’s coaching education programming last month, I connected with Beane to explore his unique perspective on the topic. He holds a USSF A license, earned decades ago in a course overseen by Sigi Schmid. Though he’s long since moved on to his own methodology, one inspired by Cruyff, FC Barcelona, and the rich Spanish soccer environment all around him, Beane is nonetheless working through US Soccer’s current coaching curriculum to stay current on the prevailing model in his native land.

“I’ve been out of the country for 18 years,” says Beane, “and I don’t think on the ground, things have changed that much in 30 years, to be honest with you… when you get to the field, I don’t think much has changed. So that’s going to be a Herculean challenge for [the federation].

“I write a lot about this: If we don’t change the fundamental paradigm of how we train our kids, then we’re not really going to change the end product,” he adds. “To me, it’s always about the pitch and the professor, basically, and what’s going on there. And there I don’t think we’ve made any major shifts because it’s under this technical progression paradigm.”

That idea, he says, is that young players must drill their technical skills at length before moving on to more advanced concepts of tactics, movement, and team play, stacking layer upon layer of soccer understanding to climb the proverbial pyramid. Using “cognition, competence and character” as watchwords, Beane and TOVO visualize player development in markedly different terms.

“The reason the US doesn’t have more intelligent players is that we don’t train intelligence. That’s the problem, in my opinion,” he says. “We have this mentality that ‘no, you can’t play until you can pass, so line ‘em up and let’s drill ‘em.’ And then later we can start to think about the why and the where and the when and what we’re doing on the pitch. So our children are the byproduct of the absence of cognitive development at very young ages, regardless of their ability.

“Every child is developing their capacity to perceive the world, conceive of their options, decide on the best option as they see it in real time, execute that option and then assess the efficacy of that. That’s what they do. That’s a human learning process, that’s human cognitive development. To suggest that US kids can’t develop cognitively is ridiculous because they’re doing it with or without a ball.”

Beane lives and is raising his six children at the heart of Catalonia, home to one of the most passionate and cerebral soccer cultures on the planet. Yet, he sees no inherent reason why American kids can’t grow up to be like Xavi Hernandez or Andres Iniesta and the rest of Barcelona’s famous “tiki taka” specialists.

“The argument that bothers me most is that ‘you need high-level [players]’ – the reason you don’t have high-level players is that you haven’t given them the opportunity at young ages, not the reverse,” he says. “We have kids that are born out of wombs just like Catalan kids, just like South African kids. There’s no predisposition to any culture that says ‘you were born in this womb, so you’re going to be a soccer player.’ That’s absurd. We just do a bad job of developing players, quite frankly, and then we try to blame it on external forces, whether it’s US Soccer or somebody else.

“And then when you couple that lack of cognitive training with the fact that we really overemphasize physical maturity and early birthdates, and fast and strong and hustling, coach-centric kids, then we’re really up against it … And we always get what we train. As Doug Lemov says, if you don’t like the behaviors of the students, you better think about what you’re doing as a teacher, not blame the student. We elicit the behaviors that we nurture.”

Youth soccer’s growth into a multi-billion-dollar industry in the US has indelibly affected the nature of player development here, which leads to some striking contrasts with Spain’s more homespun traditions of excellence.

“Licensing is important, and coaches will go through the licensing – it’s an expectation. The money is not involved in youth soccer here, so people do that basically at their expense without reimbursement,” explains Beane. “They just love football. They want to be involved. they’re doing soccer, they’re volunteering, they have other jobs. So it’s not as professional, ironically, as the United States, when we speak about coaches receiving pay for coaching teams at their normal club. Even at Barcelona – my colleague who works at night at Barcelona, for La Masia, and by day with us, is not a full-time coach. He’s not paid anywhere near what a club coach in the [US] might be if he’s at a good, strong, powerful club – and he’s at Barcelona!”

Beane followed the recent conversation about rondos, a specific activity which for many has become a manifestation of wider frustrations with US coaching ed.

“In our portfolio, we don’t think of technical progressions. What we think of is perceptual progressions or cognitive progressions,” he notes. “As easy as that is to say in one sentence, it makes a world of difference. So the rondo for us, as one exercise in the portfolio, is the minimal challenge that you can provide a player to make decisions: With one person in the middle and three options in a 4v1, let’s say. It’s not a warm-up drill. It’s not just a technical drill. It’s a cognitive drill, one where I only have one variable, that is an obstacle, and three options. So the moment you start to teach football, in my opinion, as a cognitive progression, as a perceptual, solution-oriented progression, it changes completely how we train.”

Beane has coined the term “respectfully rebellious” to describe his outlook on the status quo in the United States. He blames this country’s shortcomings not so much on the federation, however, as the wider ecosystem that forces the fed to fill vacuums left by other stakeholders.

“The clubs are responsible for educating players, and unfortunately in my opinion, the [US youth] clubs are not really football clubs, they’re just consortiums of coaches. That’s a bit depressing,” he says. “But for me, it’s exciting because it means that there is room for distinct voices to come and chisel their way into the American landscape … maybe now more than ever, because maybe now people are more willing to listen to alternative voices.”

Should the sport’s governing body in this country also be its dominant education vehicle? Beane sees something missing in that construction. He’s quick to note, however, that prominent setbacks like World Cup qualifying and the contentious USSF presidential election that followed have weakened the Fed’s relationship with its rank and file.

“I think probably they’ve done a decent job in a difficult environment and we’re probably just seeing the front end of what they hope will be fruitful, and we’re trying to judge it early, if I’m fair to them,” he says of the fed’s coaching curriculum. “That’s aside from whether I agree with the way they approach the methodology, because that’s just a matter of opinions, and I don’t.

Beane may have forged his own path in the game, one that’s taken him far from his native land. But he offers a warning to the increasingly strident critics on these shores.

“We don’t want the US Soccer Federation to fail. I hear some voices and they would love that to happen – but then what?” he says. “Those same people are probably not the people that are going to step up and take a leadership role and then be happy to be criticized. We collectively want the kids, whether they can afford it or not, to have a great experience with a well-qualified, positive coach who’s concerned about their holistic development. And we need the US Soccer institution to help us provide that. So if we don’t want them to succeed, then we’re forcing our kids into a hole we don’t want them to have to climb out of.”