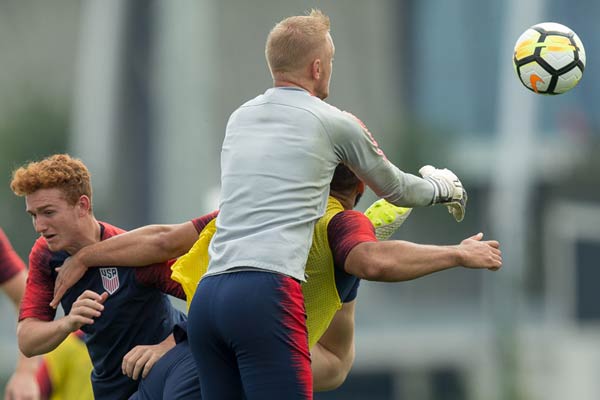 By Charles Boehm – WASHINGTON, DC (Jun 29, 2018) US Soccer Players – Even a week later, it’s still vivid, one of the most stunning moments of a World Cup with plenty of them. Argentina was already wobbling against Croatia in their Group D clash, still level at 0-0. That’s when Willy Caballero received a back pass from teammate Gabriel Mercado in the second-half.

Under pressure from Ante Rebic, the goalkeeper woefully under-hit a chip over Rebic’s head back to Mercado. The ball floated tamely into Rebic’s reach. The Croatian striker lashed it into the net mercilessly. It was an appalling gaffe, a gift that opened the door on a disastrous 3-0 loss for Argentina. The result forced Argentina to beat Nigeria in dramatic fashion to advance, with Caballero benched in favor of debutant Franco Armani.

Moments like these are high-octane nightmare fuel for goalkeepers. They also seem to be happening more often than ever, as the game evolves and “playing out of the back” philosophies ask keepers to be just as nimble with their feet as their hands.

“Oh, it’s part and parcel,” USMNT veteran Brad Guzan told USSoccerPlayers.com in the wake of Caballero’s howler. “It’s inevitable that those things are going to happen at times. I’ve had it happen to me. Obviously, we’ve witnessed it now on the biggest stage in a big game with arguably one of the best teams in the world. When you’re trying to do certain things like this, as a goalkeeper you’re left open. If you make a mistake the punishment is severe, and it’s normally going to result in a goal.”

The emphasis Pep Guardiola and other top managers place on crisp goalkeeping distribution both reflects and influences soccer’s increasingly holistic view of the position. Though keepers will always have a need for them, simple boots up the field have steadily drifted out of style over the past decade or two.

“For sure, it’s changing,” said former MLS and USMNT goalkeeper Zach Thornton, now a coach at DC United. “I don’t want to date myself, but [when] I played in high school, you played it back to the goalie and he could pick it up with his hands…. There’s more emphasis [today] on using the ‘keeper in possession and building out of the back, for sure. When I was a player, there wasn’t any type of passing – I had to do it on my own, before or after practice.”

Today, Brazil’s #1 Alisson is one of the most highly-sought-after players in the world, slapped with a price tag of $80 million or more by AS Roma in large part due to his passing and comfort on the ball.

Guzan has worked with a variety of coaches with various approaches to buildup play over his well-traveled pro career. He currently plays for one of MLS’s most respected in Gerardo “Tata” Martino at Atlanta United. He emphasizes the importance of a cohesive tactical system that simplifies the task for ‘keepers when they’re on the ball.

“I’ve worked with other managers that want to play out of the back – Tata, that’s obviously his preference and it wasn’t a huge change for me,” Guzan said. “So being able to come in here and just get the lay of the land in terms of understanding the players around me, I think that’s half the battle. But then also being able to understand the system and the movements of other guys around you. If you’re able to understand those movements and where the space is, then it makes it a little bit easier.

Helping Guzan’s development as a ball-playing keeper was the fact that he didn’t fully specialize in the position until college. He also played as a defensive midfielder at his youth club, Chicago Magic. Guzan cites the importance of decision-making, especially the ability to quickly read what a game demands in any given moment.

“The modern game nowadays is asking more questions of a goalkeeper in terms of being able to play out of the back, being able to pick a pass. But at the same time, it’s not the end-all, be-all,” he said. “It’s important that you’re able to do those types of things but at the end of the day you’re a goalkeeper, and your job’s to try and keep the ball out of the back of the net. If you have to put your foot through it and skip a few lines and go direct into a striker, it’s not the end of the world. It’s not just [that] you’re held to the blade in terms of having to play out of the back, it’s being able to recognize the right moments.

“It’s important that you recognize the moment where you’re able to play and when the game is asking to go a bit more direct. Tata is great with understanding those moments and as a goalkeeper, understanding to not put ourselves in difficult situations.”

The risks of errors like Caballero’s can be easy to measure compared to the vital but more subtle rewards of positional play, keeping the ball and stretching opponents. That’s perhaps one factor in why many goalkeeping specialists fret that the US is falling behind in a position that’s traditionally been this country’s greatest strength.

“This, naturally, leads to risk-averse coaching at some clubs, and the first thing to go in this mindset is playing out from the back. So the primary challenge I see is that too many clubs and coaches lack a commitment to consistently play this way, and accept that mistakes might result in goals conceded.”

Yes, here we are again, facing the pay-to-play youth environment and its cascading consequences on player development. This country’s professional academies are working to cultivate the modern facets of the goalkeeping trade, yet wider issues may be conspiring against those efforts.

“In our academy, I know it’s a huge emphasis for the keepers to be able to play out of the back,” said DC United’s Thornton. “That’s up there with shot-stopping, dealing with crosses, all the goalkeeping traits you need. Playing out of the back, being good with your feet is at the top.”

For some, this subject raises troubling questions about the future of American goalkeeping, which could once claim to reliably produce some of the world’s best.

“We face some of the same technical demands as we do with outfield players in this regard,” adds Bryant. “The relative lack of ‘street soccer’ or casual pick-up soccer means our players often take a little longer to develop – or never do – the same level of touch and ball-striking ability as their counterparts in other parts of the world. A goalkeeper attempting to play out from the back is only as good as their ability to strike and pass the ball accurately over a variety of distances, and with a variety of ball flights – driven, flighted, chipped.”

“Unfortunately, for a time, the number of American goalkeepers playing in the Premier League had the effect of self-satisfaction regarding our training methods, and we’ve been slow to change,” he said. “Before utilizing the goalkeeper as an additional outfield player became popular, when goalkeeping was a more individual pursuit based largely on technique and athleticism, rather than tactical play, a goalkeeper could succeed with a more individualized training program, focusing on speed, agility, strength and technique. A popular player development tool in the US is the hiring of private coaches – of highly variant quality – to provide one-on-one training. This can be beneficial for the ‘old’ requirements of goalkeeping, but is of limited value in producing modern goalkeepers comfortable playing out from the back under pressure. For that, you need a game-like environment.”

There are some reasons for hope. USMNT World Cup veteran Nick Rimando provides one case study of a ‘keeper who used his foot skills to sustain a successful career despite being smaller and less physically imposing than his typical peers. He and DC product Bill Hamid are two examples of GKs who made distribution a high priority in their own development and tangible help their teams with precise passing.

“While I do think young American goalkeepers are being left behind by their international counterparts in better training environments, the good news is I see a lot of them emulating the top goalkeepers, and making good distribution a priority,” said Bryant. “Kids want to be able to hit a side volley like Nick Rimando or Ederson, or strike accurate long passes like Ashlyn Harris, and some of them are out there working on it every day. Our training has to catch up. Chiefly, there has to be an acceptance that playing out from the back carries a degree of risk, especially with developing players, but it’s a risk worth taking.”