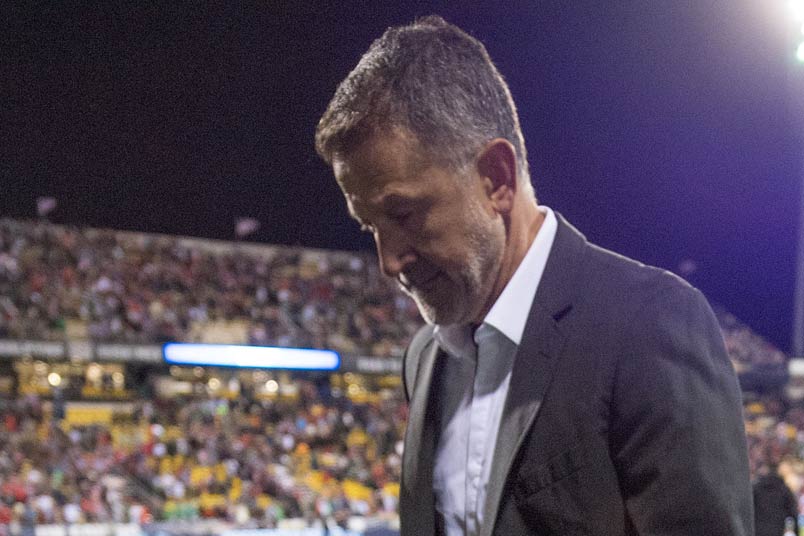 By Luis Bueno – RIVERSIDE, CA (Jun 13, 2018) US Soccer Players – On the eve of the World Cup, fans across the globe are eagerly waiting for the tournament to start. They want to see their respective nations do battle, progress, and live up to the hopes and dreams placed squarely on the team’s shoulders.

For Mexico, it is a bit more than that. The nation’s fans are yet again demanding their team do well on the world’s greatest stage. That means wanting their beloved Tricolor to show once and for all that their country can get past the Round of 16, into the quarterfinals, and join world soccer’s elite in the process.

Just days before its first game against Germany, though, El Tri fans’ hopes and dreams might not match the reality for this time right now. While it may be realistic for Germany or Brazil fans to expect a run deep into the knockout rounds of Russia 2018, Mexico is not quite there.

The talent on the roster is deep and more pedigreed than any other team Mexico has sent to the World Cup. Still, history and a tough group will provide a greater obstacle than this team can overcome. There’s certainly a chance, but it’s hard to get the positives to outweigh the negatives.

Mexico’s talent has carried the team far. It’s a squad that has as much talent as any previous version of El Tri, proving that at home, in Europe, and in MLS. A total of 14 players compete for clubs outside of Mexico. Now, critics may discount the trio that plays in MLS but none of the three – brothers Giovani and Jonathan Dos Santos as well as Carlos Vela – have ever played one minute in Liga MX.

Playing abroad means different experiences and competitive levels. Being part of that environment gives players as many chances to face as many different obstacles as possible. All of that could come in handy at the World Cup.

This roster also has some true threats. Osorio must try and find playing time for forwards Javier “Chicharito” Hernandez, Jesus “Tecatito” Corona, Oribe Peralta, Hirving “Chuky” Lozano, Raul Jimenez, and Vela. With the likes of Hector Herrera, Andres Guardado, Miguel Layun, Carlos Salcedo, and Guillermo Ochoa behind them on the field, Mexico has a rather formidable roster.

If Mexico was able to get to the Round of 16 in each of the last six World Cups, then this roster should be strong enough to match that. At least, that is the logic fans and the media use. Whether the team can win a Round of 16 game and get into the quarterfinals is that big picture question.

RESULTS BUT NOT MUCH ELSE

Talent alone though does not win games. Osorio himself is a bit of enigma. Osorio has fallen out of favor with nearly everyone outside of the team. Fans chanted “¡Fuera Osorio!” – or “Osorio Out!” – at Estadio Azteca after Mexico’s 1-0 win over Scotland on June 2 and the hashtag #FueraOsorio has been popular on social media.

The Mexican media soured on him a couple of summers ago, particularly after Mexico’s humiliating 7-0 defeat to Chile at Copa America 2016. Osorio’s penchant for squad rotations has not helped his cause with the media, who criticize him harshly over that. The common complaints are that it is impossible to build a foundation or to establish a consistent style of play without a set starting lineup.

Osorio does have his plusses and minuses. He carries an impressive record of 31-8-9 and guided Mexico through World Cup qualifying without many issues. It was a rather anticlimactic process for Mexico, which is a change from the near-disasters of 2013, 2009, and 2001. But Osorio has done poorly in knockout-round games at tournaments, notably the loss to Chile and a 4-1 loss to Germany in last summer’s Confederations Cup.

Perhaps more telling than the lack of support from fans and the media is how his players back him. Players defend Osorio and claim that they are all 100 percent behind him. Giovani Dos Santos ran straight to Osorio after scoring against Scotland and celebrated the goal with him. If the players can use Osorio as inspiration for their performances, then they may do damage.

Perhaps the greatest challenge Mexico faces is its own poor showing in World Cups held in Europe. Now, results from Switzerland 1954 and England 1966 may have no direct bearing on what happens in 2018. History is telling nevertheless and reveals a series of failures for Mexico.

Overall, Mexico holds a 2-8-6 record in World Cups played in Europe. Against European teams, Mexico has a 0-6-4 mark. El Tri’s only wins in Europe-based World Cups are against South Korea in 1998 and against Iran in 2006. Mexico plays South Korea once again this time.

However, Mexico is staring down the barrel of powerhouse Germany and a solid Sweden squad. Even a win over South Korea and a draw against one of the other two countries may not be enough to see Mexico through to the Round of 16.

To make a deep run in the World Cup then, Mexico would not only have to overcome its own sordid history. It must also overcome the collective failures of dozens of nations outside of Europe. No nation outside of Europe and South America has reached the semifinals in European World Cups. Worse, the only nations outside of those continents to even reach the quarterfinals in World Cups played in Europe were Cameroon in 1990, North Korea in 1966, and Cuba in 1938.

A talented roster and a solid coach has carried Mexico this far, which is an accomplishment. To expect Mexico to break through this time around, with a difficult group and a negative history looming over its shoulder is perhaps expecting too much. While disappointment will set in soon enough, perhaps that will help set a foundation for realistic expectations. Then the Mexican Futbol Federation can build from there for the next World Cup cycle.