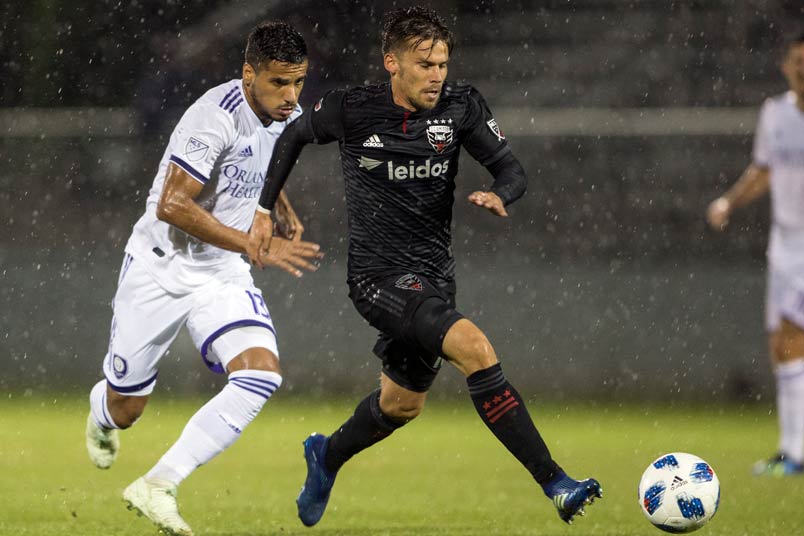 The round of 16 in the 2018 US Open Cup concluded with seven MLS teams advancing to the quarterfinals. Louisville FC is the last lower division club still alive in the knockout competition, winning the all-USL match-up against Nashville FC 2-1 at home. Paco Craig put Louisville City up in the 24th minute with Paolo DelPiccolo doubling the lead in the 58th. Nashville’s Matthew LaGrassa pulled a goal back in the 68th minute.

Orlando City advanced past DC United 4-2 on penalties after finishing 1-1 in regulation and through extra time. After a 90 minute weather delay that starting in the 6th minute, Lucho Acosta put DC United up at the SoccerPlex in the 10th. Orlando’s Justin Meram equalizing in the 17th. United went a man down with a second yellow to Chris Durkin in the 99th minute. DC missed their first two penalties, ultimately deciding the game with Orlando not missing until the fourth round.

Atlanta drew a reported crowd of 41,012 to Mercedes-Benz Stadium in a 1-0 loss to the Chicago Fire. Nemanja Nikolic scored the game’s only goal in the 54th minute. Richard Sanchez made four saves to keep the clean sheet.

“I think that’s football,” Atlanta coach Tata Martinez said. “I think we created enough chances to, at minimum, have tied the game, I think we deserved that. In the first half, we went from better to worse. I thought we started off well and then about the middle of the first half Chicago seemed to take a little more control of the game. In the second half, they created some chances, the goal being one of them, but we responded with a few chances of our own. I thought we had enough that we could’ve tied the game or even gone ahead at that point, but just weren’t able to.”

LAFC came back to beat Sacramento FC 3-2 at home. LAFC fell behind to an Elliot Hord goal in the 35th minute. Benny Feilhaber equalized for LAFC in the 58th. Villyan Bijev put Sacramento ahead in the 60th with Diego Rossi equalizing in the 67th. Rossi assisted on Latif Blessing’s winner in the 89th minute.

The quarterfinals are set for July 18 with Philadelphia vs Orlando City, Chicago vs Louisville FC, Houston vs Sporting KC, and LAFC vs Portland. The semifinals are on August 8 with the 2018 US Open Cup final scheduled for September 26.

USA Today’s Rob Harris with a look at Mexico playing against their World Cup history. The NY Times’ Andrew Das with FIFA fining Mexico over fans’ homophobic chanting at the World Cup. The LA Times’ Kevin Baxter also wonders what will stop the Mexico chant. FC Yahoo’s Henry Bushnell looks at how teams are treating the concussion protocol at the World Cup. AP’s Rob Harris explains the bigger issues for Saudi Arabia in world soccer.

The Austin American-Statesman’s Chris Bils updates the situation with the proposed move of the Crew. Inside World Football’s Andrew Warshaw on the future of multiple countries hosting the World Cup.