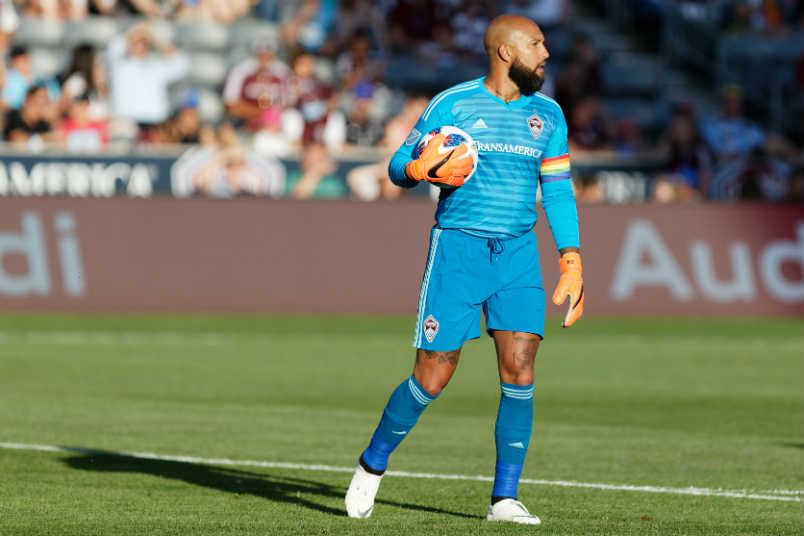 The 2018 MLS season resumed after a week off for the start of the group stage at the World Cup. The weekend schedule opened with a big result for the Philadelphia Union, shutting out Vancouver 4-0 at home. Borek Dockal put the Union up in the 71st minute, scoring again in the 71st. Vancouver went a man down in the 72nd when Jose Aja saw red for denying an obvious goal scoring opportunity. Ilsinho converted the penalty in the 74th. Fabrice-Jean Picault converted from the penalty spot five minutes into stoppage time. Philadelphia goalkeeper Andre Blake didn’t have to make a save for the clean sheet.

The Red Bulls shutout FC Dallas 3-0 at home. Bradley Wright-Phillips scored for New York in the 23rd. The Red Bulls went a man down in the 27th minute with a red card to Daniel Royer. Aaron Long doubled New York’s lead in the 39th minute with Kemar Lawrence scoring in the 48th. Reto Ziegler saw red for Dallas in the 90th minute. Luis Robles kept the clean sheet with six saves.

“First of all, congratulations to New York,” Dallas coach Oscar Pareja said. “I think that they played a remarkable game because playing with 10 men and being able to hold the result that they did in the game and put out that competition for us was very good. And for us, very frustrating. We had the opportunity to level the game when we were one man up and also we had some opportunities to create counters on them. Tonight wasn’t the day.”

Montreal shutout Orlando City 2-0 away in Orlando’s first game after firing coach Jason Kreis. Montreal went up from a 13th minute own-goal with Ignacio Piatti scoring in the 84th minute. Evan Bush made one save for the clean sheet.

Sporting KC came back to beat Houston 3-2 at home. Mauro Manotas scored for the Dynamo in the 2 and 45th minutes. Daniel Salloi started the Sporting comeback in the 59th, assisting on Diego Rubio’s equalizer in the 85th and Khiry Shelton’s winner in the 88th minute.

“Honestly, the way I would say it is that it was completely two different games from one half to the other,” Sporting KC coach Peter Vermes said. “The first half we were non-committal and we were playing backwards the whole time. We allowed them to dictate the tempo of the game and in the second half, we pushed the game. We took it to another level. We dictated the game and we pushed forward. The opportunities were created because of our mentality to go forward, our mentality to get in the box, and our ability to finish and play through teams if we want to.”

Colorado picked up a 3-1 home win over Minnesota United. Miguel Obarra put United up in the 20th with Edgar Castillo equalizing in the 50th. Christian Ramirez returned the Minnesota lead in the 65th with Joe Mason equalizing in the 74th. Tommy Smith scored Colorado’s winner seven minutes into stoppage time.

“It’s a tough one to take tonight because at no stage did I think we were going to lose the game,” Minnesota coach Adrian Heath said. “I never try to make excuses, but there are no stoppages after the six minutes and why we carried on playing I don’t know. Six minutes were up when the ball was in the middle of the field, so that’s a disappointment.”

Real Salt Lake and San Jose drew 1-1 at Rio Tinto Stadium. Damir Kreilach put RSL up in the 54th with Danny Hoesen equalizing in the 64th.

“Defense did a good job at the end of the game,” San Jose goalkeeper Andrew Tarbell said. “We had a lot of pressure on us so we were able to make a couple of plays, a couple of clearances to keep it a draw. It was good concentration by everybody in the back.”

Seattle and Chicago drew 1-1 at CenturyLink Field. Aleksandar Katai put the Fire up in the 9th with Clint Dempsey equalizing for the Sounders in the 22nd. Both teams finished with seven shots on goal.

“I think that this was definitely one of the best games we’ve played this season and I’m very proud of our team,” Veljko Paunovic said. “It’s very difficult for us to go home after this match and look at the fact that we didn’t win the game. It was a great game for the fans. Both teams had a lot of opportunities and it was a great soccer night.”

LAFC shutout the Crew 2-0 at home. Laurent Ciman scored for LAFC in the 4th minute with Adama Diomande doubling the lead in the 8th. Tyler Miller kept the clean sheet with one save.

On Sunday, Atlanta came back to draw 1-1 at home to Portland. Larrys Mabiala put the Timbers up in the 32nd minute with Julian Gressel equalizing for Atlanta in the 56th.

“We talked about it because on the one hand we were unfortunate because we had a few good goal scoring opportunities that we didn’t capitalize on,” Atlanta defender Michael Parkhurst said. “But at the same time, we gave up a couple chances where we were lucky that they didn’t finish. The could-have gone either way, but anytime that we don’t take three points at home, it’s a bad feeling for us.”

NYCFC came back to beat Toronto FC 2-1 at Yankee Stadium in their first game under new coach Domenec Torrent. Victor Vasquez scored for Toronto in the 37th minute. Jo Inge Berget equalized for NYCFC at the 51st minute and scored their winner in the 68th.