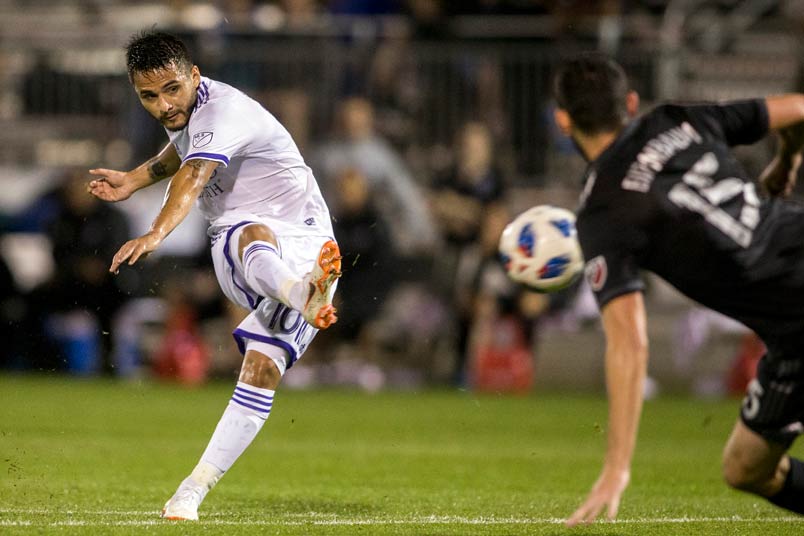 By Jason Davis – WASHINGTON DC (Jun 22, 2018) US Soccer Players – It’s tough to blame the leadership at Orlando City for deciding to dismiss head coach Jason Kreis during the brief World Cup break. The Lions aren’t exactly in a death spiral. It’s still too early for that. However, six losses in a row won’t convince anybody that this is the year Orlando makes the playoffs.

Kreis arrived in Florida midway through the 2016 season, taking over for Adrian Heath. Kreis’s reputation had taken a hit from a rough expansion season with NYCFC the year before. What got Kreis the NYCFC job was his success with Real Salt Lake. There was no doubt he knew how to coach in MLS.

It’s now almost a decade since Kreis’s Real Salt Lake lifted the 2009 MLS Cup. Things change even quicker in this league now than they did then. When Kreis moved on from RSL following the 2013 season, he left a team that finished second in the Eastern Conference, third overall, losing the MLS Cup on penalties to Sporting KC. That reputation drew NYCFC’s interest and later Orlando’s.

It’s not always clear who’s to blame when a coach gets fired. Yes, Kreis picked the players and chose the system under which they played, but he was not directly responsible for every signing Orlando made during a very busy offseason. The Lions had their depth severely tested due to injuries to their best goalscorer (Dom Dwyer) and their best center back (Jonathan Spector), and international duty for a crucial midfield contributor (Yoshi Yotun). Orlando City CEO Alex Leitao might have dismissed Kreis as much for morale as for culpability.

If there’s some credit to give, it’s for Orlando’s unwillingness to accept mediocrity. This is a league that often sees coaches get second, third, and fourth chances over the course of a season to right a listing ship. The playoff safety net looms large in the thinking of many an MLS boardroom. There’s always an easy way to justify holding on to a failing coach until it’s too late. It doesn’t hurt that keeping a coach means avoiding extra costs on the coaching line item of the budget.

Leitao spoke on Tuesday about the timeline for hiring a new head coach. Bobby Murphy is the interim boss for the time being. The club is intent on making a permanent hire, perhaps as soon as next week. Orlando is in the midst of interviewing candidates, with a host of names linked to the job.

Although Orlando is just one club, it will be interesting to see which direction they look for their next coach. Among the names in the rumor mill are former Brazil national team head coach Phil Scolari, former Timbers man Caleb Porter, and former Orlando Designated Player Kaka.

In an interview with Jordan Culver of ProSoccerUSA, Leitao killed the idea of Kaka coming back into the fold in a technical side, at least for the time being. The CEO also pointed to interest in the job, claiming “hundreds” of people had expressed interest in joining Orlando City.

Even if the number Leitao touted is accurate, we can’t know if any of the “hundreds” are notable coaches. Scolari and Porter make sense as candidates, for different reasons. Scolari is Brazilian, as is Leitao and Orlando City owner Flavio Augusto da Silva. If Scolari covets a challenge in America, Orlando is the most obvious cultural fit. Meanwhile, Porter’s success in Portland and reputation as a bright young American soccer mind might make him attractive to the Lions.

Teams have picked coaches for sillier reasons than countering a rival. It’s not out of the realm of possibility that Orlando City could tap Scolari or someone like him to try to follow the success of Atlanta United and Tata Martino. While Atlanta is still chasing its first trophy, Martino’s remarkable success and tactical impact on the league puts him in an echelon unto himself in MLS. Wearing ambition like a badge of honor, Atlanta United put significant money down on an elite tactician and is reaping the rewards.

With Martino’s example in place, five MLS teams made head coaching hires during the last offseason. Two clubs, Colorado with Anthony Hudson and San Jose with Mikael Stahre, hired young, foreign coaches thought to be on the rise but without anything approaching the price tag or fame of Martino. One, the New England Revolution with Brad Friedel, hired an American soccer legend in his first senior level position. Another, the Portland Timbers with Giovanni Savarese, picked a coach with significant experience in the United States and a history of winning in the second division. Still another, the Montreal Impact with Remi Garde, signed a foreign coach with a better resume than most MLS hires but significantly less impressive than Martino’s.

Savarese is settling in well with the Timbers. The jury is still out on Friedel. Signs aren’t positive for Hudson, Stahre, or Garde. Failure or success midway through one season doesn’t prove much about their long-term ability to win in MLS. It would be dangerous to generalize about similar future hires based on their “type”.

There’s no doubt that MLS is changing quickly and that the chances of Orlando City scoring a big-name foreign coach are higher than they’ve ever been. Leitao and GM Niki Budalic are no doubt conscious that the choice of head coach is seen through the lens of MLS 3.0 with it’s bigger budgets and wider reach.

American coaches still have their place in MLS. Look no further than Toronto, New York, and Columbus for examples. Now, the pressure is on for clubs to be more aggressive when turning over a traditionally undervalued position.

No matter who Orlando hires, the transition into the job won’t be easy. With that in mind, a coach with experience in MLS might make sense, regardless of what message it sends.

Orlando is getting back to full health, and midfielder Yotun will be returning shortly following Peru’s three-and-out World Cup. Maybe the time is right to go big for Orlando when interest in MLS is at its highest level ever. Keeping up with the elite has always been the game, and it’s only getting tougher.