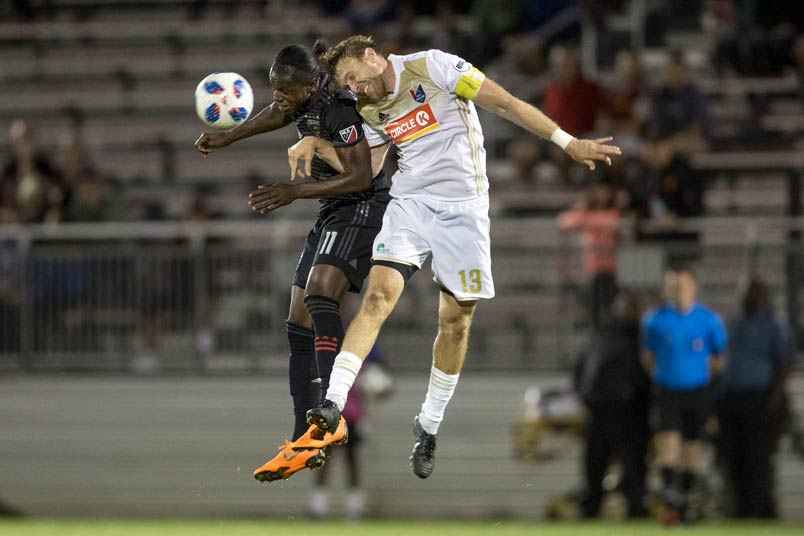 By Jason Davis – WASHINGTON DC (Jun 20, 2018) US Soccer Players – Despite the world’s attention being on the events in Russia, the US Open Cup rolled into the round of 16 this week. A break in the MLS season for the group stage of the World Cup provided some flexibility in the schedule. Games featuring 13 MLS and three USL teams were strung out across a six-day period, beginning last Friday.

This version of the tournament isn’t unusual. MLS teams traditionally dominate the competition. A sprinkling of second division teams is fairly common as well. Thanks to the draw, we’re guaranteed to see a USL team make the quarterfinals. For comparison, last year’s tournament also had three second division teams in the Round of 16. FC Cincinnati progressed to the semifinal stage thanks to a pair of upsets over MLS teams and a win over Miami FC of the NASL.

Missing from the Open Cup are USL teams run or directly affiliated with MLS clubs through ownership. A rule change ahead of the 2016 season barred the USL clubs that serve a developmental and reserve sides for top-level teams from participating.

The reasoning is sound, as MLS teams made a habit in the previous edition of holding back the best players on their USL rosters to keep them from being cap-tied. The parent clubs wanted the option to use those players in their own Open Cup games down the line, limiting the strength of the USL teams.

On a more general level, the idea of USL affiliates competing in the tournament looks anticompetitive on the surface. Should an MLS team match up against its affiliate, collusion is an obvious concern. With little to separate the organizations, predetermined results, roster shenanigans, and half-speed games could sully the Open Cup.

However, what was a competitive fix might have robbed the tournament of some of its competitive edge.

The simple elimination of professional sides from the tournament thins the pool of possible upsets. The Open Cup thrives on Cinderella stories. While a run by an MLS affiliate might not be a romantic as that of an independent team, cutting them out makes it more like the top division sides will have their way on the road to the championship. Come the round of 16, the tournament is already running out of steam. The trophy going to an MLS team putting in a half-effort looks like a foregone conclusion.

MLS teams holding their best USL players back because of liberal rules around roster movement is a worry in theory. In practice, the results since the rule change reveal clubs are picking weakened, mixed teams rife with untested younger players. Robbed of US Open Cup games that would provide a knockout environment for developmental players to earn experience, MLS teams are instead bringing through more green players than ever before. That adds a new element of interest for MLS fans, but it doesn’t exactly serve the tournament.

As exciting as it is to see homegrown teenagers get their chance to play in the Open Cup, the rawness of that talent reflects directly on how much their parent clubs value the competition. It’s hard to argue that serving as a further incubator for the developmental structures of MLS teams is great for the Open Cup. The importance of the tournament takes a hit when MLS teams don’t play competitive lineups, much less first choice.

Though the romance of the US Open Cup typically flows from the exploits of amateur teams in the tournament, it’s a near-certainty that a professional team will win. Going further, MLS’s grip on the Open Cup tournament is unlikely to slip any time soon. No lower division side has won the Cup since 1999, and no non-MLS team reached the final since 2008.

Put simply, the more professional teams in the tournament, the more competitive it becomes. It’s anyone’s guess how many pro leagues will be operating at any point in the immediate future, but for the time being the group of American professional clubs is two leagues. Even with rampant expansion, the Open Cup is less competitive than it could be because so many teams are ineligible under the US Soccer rules.

There’s a very real question about the strength of the Open Cup and whether organizers should bar any professional club, regardless of ownership, from the tournament. Beggars can only be choosers when the quality of the competition is beyond reproach. The current status of the Open Cup, as a secondary trophy that clubs only bother with if and when their reserves and kids push them into the quarters or semis, indicates that there’s a long way to go before that’s the case.

Perhaps the US Open Cup needs to avoid the specter of collusion more than it needs those 10 teams attached to MLS clubs through ownership or, in the case of Rio Grande Valley, “roster management”. US Soccer deemed it necessary to institute a rule to cover USL teams operating under the auspices of MLS teams for a reason. The current environment of American soccer makes that rule prudent.

There may be other approaches possible, including new roster guidelines that might prevent MLS teams from dipping into their USL rosters too heavily. Where there’s a problem in American soccer, there is too often a brute force solution rather than a more nuanced approach. Lower division soccer in the United States needs as much exposure as it can get.

MLS-owned teams in the USL may not be anyone’s idea of perfect examples of how to build the professional game in America beyond the MLS level. Then again, in a country that has seen literally hundreds of teams come and go perhaps we need more of an open mind.