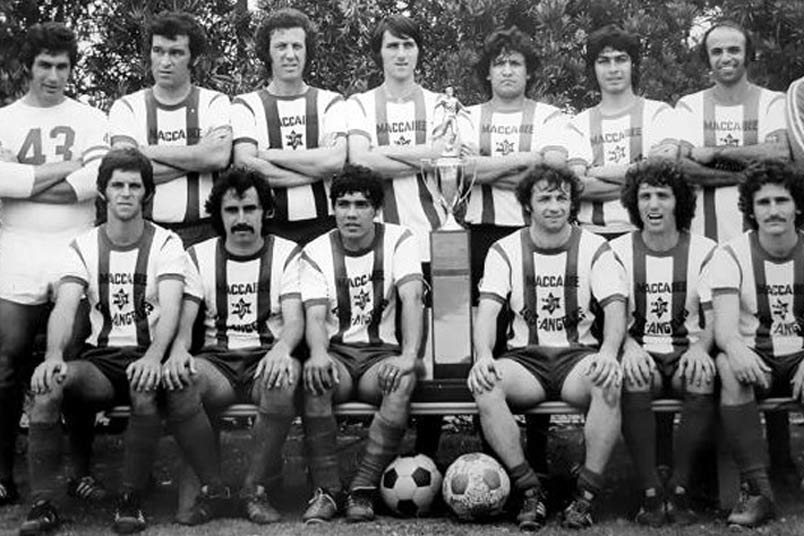 By Clemente Lisi – NEW YORK, NY (Jun 18, 2018) US Soccer Players – The history of American club soccer is full of stories that include immigrants showing their ethnic pride through the world’s game. It’s what kept the game alive in this country throughout most of the 20th century before the NASL took off in the 1970s. While Italians, Germans, Hungarians, and Ukrainians get a lot of credit for starting teams and succeeding, they weren’t the only ones to do so.

A group of Israeli expatriates and Holocaust survivors formed Maccabi Los Angeles Soccer Club in 1971. They quickly became successful in the ensuing years on both the local and national level. What transpired over the next decade has led some to call Maccabi Los Angeles the most successful club team in American history. In 2015, Vice Sports labeled them “Los Angeles’ forgotten football dynasty.”

The team competed in the GLASL, a league of clubs in the Los Angeles metropolitan area. No club team is going to become great by dominating a local league, even in the country’s biggest city. It takes a national competition like the US Open Cup. In its short 11-year history, Maccabi Los Angeles reached the finals seven times and won it five times. The only other team with five wins was Bethlehem Steel, a team playing in the de facto topflight decades earlier.

Among Maccabi’s stars were fullback Eli Marmur and striker Benny Binshtock, both Israeli citizens working in the USA. The team also featured players on the roster from all over the world, including Mexicans, Germans, and Trinidadians. Given their quick success, playing for Maccabi became about soccer and lifting trophies.

The team had humble roots. Formed out of the Maccabee Athletic Club, based in Los Angeles, the soccer team started in 1971. Using players with international experience with Israel, Maccabee LA started with an advantage in the amateur game. They build on that, forming an international group that represented the melting pot ideal.

Moshe Hoftman, a former Israeli international who played for Maccabi, said the team exuded Jewish pride and featured a large crest of the Star of David on their jerseys.

“This was a club founded by Holocaust survivors,” Hoftman who also played at UCLA and helped the Bruins reach the 1971 NCAA championship game, told USSoccer.com. “Two or three of the founders nearly lost their lives in the madness of those days.”

Often the target of racial slurs by opposing players, Maccabi Los Angeles would persevere and embody that warrior spirit, twice winning the treble – the GLASL, California State Cup, and back-to-back US Open Cups starting in 1977. Among the highlights: the team went a staggering 35-0 during the 1976-77 season. They won the US Open Cup in 1973, followed by four more Open Cups in 1975, ’77, ’78 and ’81.

It’s that US Open Cup success that cements the Maccabi Los Angles legacy. The highlight during this remarkable run was when Maccabi played Bridgeport Vasco de Gama of Connecticut in the 1978 Open Cup final at Giants Stadium in suburban New York before 30,000 fans. The game was part of a doubleheader with the Cosmos and the Tampa Bay Rowdies.

While Maccabi’s US Open Cup dominance is unquestioned, there’s still the topflight isolation of the 1970s to consider. The NASL was more of a closed shop than MLS, completely ignoring not only the Open Cup, but the rest of American club soccer. When the NASL teams played friendlies, it was against foreign clubs. For Maccabi, that meant never knowing what they could do against the professional teams.

Maccabi had once tried to schedule a friendly against the Los Angeles Aztecs, but the NASL club never followed through with it. The refusal of NASL teams to participate in the competition certainly for the Israeli-American club to go on a history-making US Cup run that remains unmatched to this day. It also denied them an opportunity to see if they could compete. So did circumstance.

In 1978, Maccabi LA qualified for the CONCACAF Champions Cup. With that edition of the tournament in organizational chaos, Maccabi didn’t play their scheduled two-game series with Mexican club UNAM Pumas. Instead, Pumas advanced in a walkover to play Chivas. The organizational issues meant three teams ended up sharing the championship. It’s worth wondering what would’ve happened had Maccabi done well in that tournament, perhaps forcing the NASL to take the rest of American soccer a little more seriously.

Maccabi ceased operations in 1982, but the Maccabee Athletic Club is still in existence. The organization prides itself, according to its website, on “Jewish values and ethics, and sportsmanship” and continues to provide a place for youth sports to thrive. It is the only tangible legacy of what many consider one of the best club sides in US history.