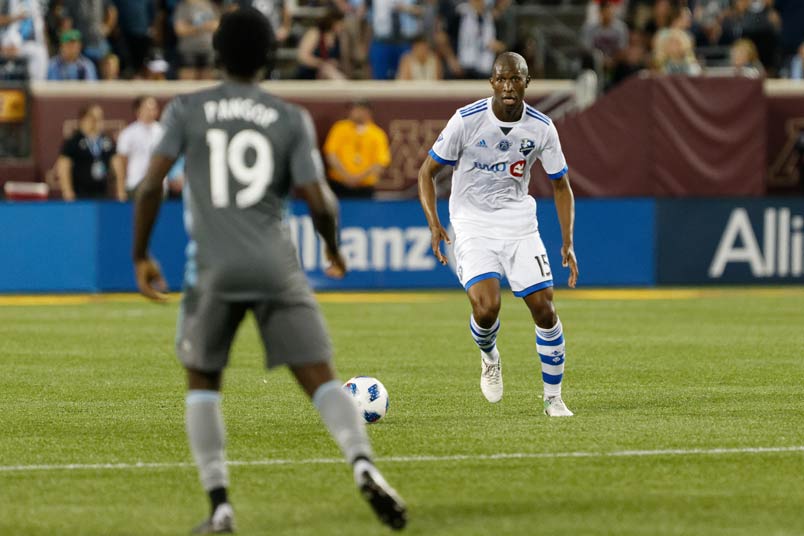 By Jason Davis – WASHINGTON DC (Jun 1, 2018) US Soccer Players – There are higher profile teams in MLS than the Montreal Impact. Record-breaking crowds in Atlanta. Significant spending in Toronto. The big stage of New York. High-profile signings in LA. New stadiums in several places. All of those things and others serve to make Montreal something of an afterthought in a constantly changing league.

It doesn’t help that the much of the discussion around the Impact happens in French. That creates a separation between the club and the rest of MLS. Based in Canada and culturally distinct, the Impact is easy to forget.

Despite falling behind so many, there might not be a more interesting team in MLS than the Montreal Impact. The Impact is a heady mix of soccer history, the Quebecois culture, a hands-on investor/operator, and a tendency for dramatics. Over it’s MLS history, perhaps no team has experienced such heights in one moment only to crash spectacularly in the next.

2018 looks to be a continuation of a crash that started last season. Following a memorable Eastern Conference final against Toronto FC in 2016 that saw Montreal push the Reds to the brink, the Impact missed out on the postseason in 2017. That failure led to head coach Mauro Biello losing his job after just more than two full seasons. Biello’s connection to the Impact went back 20 years, to when the club was a minor league soccer franchise founded by the family of current owner Joey Saputo. He’s the only player in Impact history, MLS or otherwise, to have his number retired.

With Biello sent packing, Saputo cast an international net for someone to lead the club back to the playoffs. The Impact hired former Lyon and Aston Villa manager Remi Garde for the role, counting on his experience to bridge the gap between European football and the oddball nature of MLS. The Impact perhaps consciously tapped a French speaker, the better to stay in touch with the Francophone elements of the fan base.

So far, things haven’t gone to plan. Even allowing for an adjustment period under Garde, the Impact hasn’t taken a step forward from 2017. After Saturday’s 2-0 loss in Minnesota, the Impact has lost four straight games and been shutout in each. The frustration is bubbling over, with the French coach going public with criticism of his team on numerous occasions over that stretch.

“We had opportunities, but there was a lack of skill, talent, and willpower tonight,” a blunt Garde said after the result against the Loons.

When Samuel Piette heard what Garde said, the midfielder acknowledged that the comments hurt coming from the head coach. He posited that Garde might have spoken in the heat of the moment. It’s not often, especially in MLS, that coaches are so brutal with a postgame assessment.

According to TVA’s Nicolas Martineau, Garde doubled down on the comment ten minutes later, saying “We lack talent. I do not have to correct my remarks.”

Garde throwing his players under the bus is a strange and potentially a dangerous move for the first year MLS coach. That style cuts against the usual “rah-rah” nature of coaching in North America. Coaches are more likely to grouse about refereeing or deflect attention away from poor player performances with platitudes than hit directly at things like “skill” and “talent”.

It appears Garde underestimated the level of the league and is paying the price, no matter the issues with his roster. The current four-game losing run isn’t even the first of its kind for the Impact in 2018. Montreal ended a similar stretch with a win against New England back on May 5. That sort of failure is as much a function of tactics and team selection as it is of the club’s total talent. Shoring up the defensive problems and learning how to grind out results may not enthrall the fans, but it would help the Impact stay in the playoff race until reinforcements can arrive.

Saputo isn’t pleased. Speaking on Montreal radio after a 1-0 loss to the Galaxy at Stade Saputo two weeks ago, the Impact owner declared that changes are coming to the club in the summer transfer window.

“I’m not happy with our situation. I’ve had discussions with the technical staff and the Impact will definitely have to move during July’s transfer window,” he said “I cannot accept where we are at the moment. I’m very competitive. We still have a chance to achieve our goals. There are still a lot of games to play. I’m not going down without a fight.”

Saputo even went so far as to suggest that they could sell Ignacio Piatti to fund the acquisition of two or three players. Piatti is a game-changing goalscorer and the club’s biggest star. He played a crucial role in the success Montreal managed to achieve under Biello in 2016. Selling him would represent a massive change of direction for the club.

If Piatti is not untouchable, it speaks to the desperate times in Montreal. The rhetoric coming from both the head coach and the owner is of a level rarely seen in other MLS cities. The open admission that the club is foundering by two of the men most responsible for the situation is stoking flames in the fan base, where a split along language lines is fostering internal resentment.

To be fair to Garde, there’s plenty of blame to go around in Montreal. Technical director Adam Braz is on the list of those who must own results to this point, as is sporting director Nick De Santis. The operation of the Impact front office is somewhat mysterious, but both men had some hand in assembling the roster that is currently tied for last-place in the Eastern Conference and has the league’s worst points-per-game ratio.

“Change” has long been the calling card of the Impact. The club, a reflection of its owner, is not known for its patience. The only consistent identity Montreal has fostered is one of near-constant turmoil, interspersed with brief stretches of competence. The question the Impact face now, one-third of the way through a season that is rapidly slipping into catastrophe, is whether the answer to its problems is even more change – at head coach, in the roster, or both.